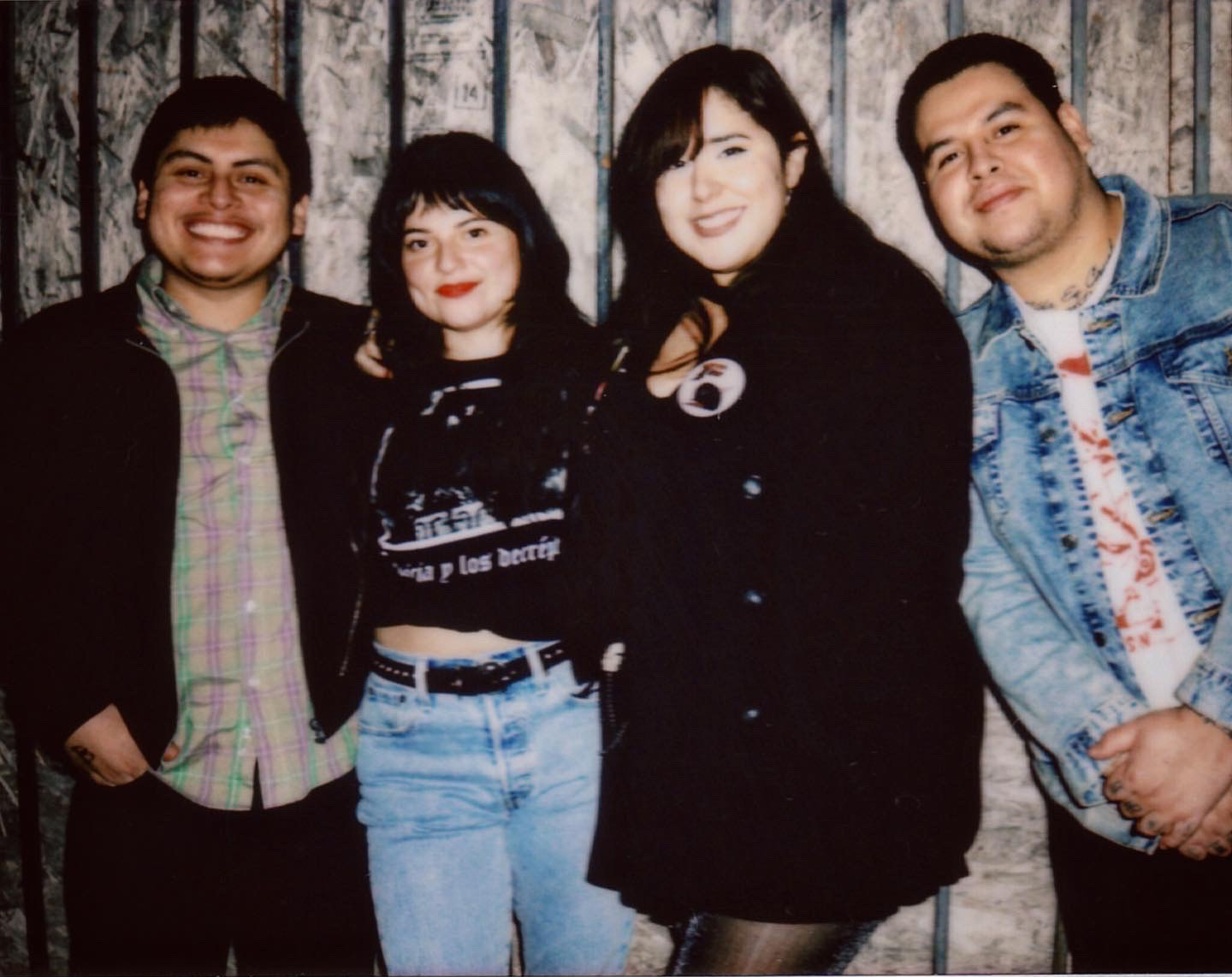 Demonios are a four piece band from Los Angeles with the right dosage of raw and primitive elements.

videoprotozoa: There seems to be, at least to me, an emergence or re-emergence of bands "post-pandemic"... Do you feel like Demonios is a new L.A. punk band? What does that mean to all of you?

Kat: We’ve been jamming for a while now but didn’t really start playing shows consistently until late 2020. So, although we’re not a new punk band, I feel like a new punk band.

Cristian: Ever since Nat joined on vocals, I feel like a new band. Before the pandemic, we only played about three shows anyway. Originally, Demonios started as a three-piece and then maybe less than a year ago we were joined by Nat on vocals. Alex and I had been jamming since high school in and out of bands and we knew Kat from Destruye y Huye. One day we asked Kat to jam out and we’ve been at this ever since.

Kat: We started jamming on and off in late 2018 and in 2019 our friend Gabriel Perez recorded a demo for us at Alex's house. We never officially released that on to a tape or anything, but we did upload it to YouTube just to have something to share with everyone. We played two shows with that line up before deciding we wanted to add someone on vocals so we could focus on playing our instruments. Power to those that do both, that shit is hard. That's how Nat came into the picture and now I feel our sound is complete.

Natalie: When they reached out and asked if I'd be open to singing, I was pretty surprised that they'd ask me. I'd never sung for a band before and I wasn't sure I even wanted to. But once we practiced, I felt really comfortable and wanted to see where we could go with this. Needless to say, I'm happy with my decision.

videoprotozoa: Did any of you have ideas of what you wanted Demonios to sound or be like? Are there strong influences that all of you feel shape the band?

Cristian: I always imagined Demonios’ sound to be whatever we wanted. I’m heavily influenced by Mexican hardcore bands like Herejía, Histeria, Massacre 68, Sedicion. When we play, I definitely hear d-beat influences coming from Kat and Alex.

Alexis: I wanted to go for a UK82 type sound and I don't think we're far from it. Some people have mentioned that we kind of sound like Subhumans and that's a big fucking compliment.

Kat: I think we all went into the band optimistic without a certain idea of what we wanted to sound like, which is good because I wouldn’t want us to be pigeon holed into a certain sound. Even though, I feel like that inevitably happens anyway. Personally, I’m really influenced by international punk bands from the ‘80s. I know that's pretty broad, but I think my musical interests encompass a variety of genres. A few bands that come to mind is Kaka de Luxe, As Mercenarias, Kleenex/Liliput, Colera, Bulimia, RIP, Eskorbuto, Alaska y Los Pegamoides, Larsen, Gauze, The Comes, Herejia, Olho Seco, Peggio Punx, Ultimo Resorte, Cocadictos, The Ejected, Blitz, Xmal Deutschland, Strawberry Switchblade, Buzzcocks... this list can go on forever, so I’ll just leave it at that. [laughs]

Natalie: When I first heard Demonios, I really liked what they sounded like. I know all of us are into various types of punk and other genres, and I'm not sure what their exact influences were when they started the band. As for me, my influences include bands like Ultimo Resorte, Desechables, Electric Deads…

videoprotozoa: What initially drew me to the band was the artwork on your demo cassette. How strongly do you feel aesthetics plays into punk and the image of your band?

Alexis: A lot of people are in love with the image that we have for our demo cassette which is really cool. Shout out to Krab because he's the one that drew and came up with the design for us. The image itself is insane, detailed, and gives you an insight on what the band should sound like for those who maybe came across our image or recordings and didn't know what it was. It's a skull with a sick ass fucking mohawk and dangly earing, with an angel in one eye and a demon in the other eye.

Kat: Someone recently got that artwork tatted! Not sure if was because they just love the art that much or our band, but I'd like to believe it's a little of both. Imagine that dude hasn't even listened to our band???

Alexis: Punk demos, albums, and EPs, have always had crazy artwork or pictures and it catches people's attention. Aesthetics play a huge role I believe because at the end of the day, what is punk? Who is punk? People dress, look, and sound different all the time. I think the image represents the band well.

Kat: Damn, this is a tricky question for me because as much as I love punk aesthetic, especially art (in all of its forms), I don't necessarily believe you got to look punk in order to be a punk or know what’s up with it. People that police others based on their fashion sense are fuckin posers if you ask me. Do your own thing and stop worrying about everybody else. As far as aesthetics go in our band in particular, I don't think they matter much at all. To be quite honest, I like that. I rather people focus on the music and let it speak for itself. However, when it comes to art, we're definitely about supporting artists in the punk scene. That's what punk is about, building community and supporting one another. There's just so many artists in the punk scene that have amazing work that deserve to be shared, commissioned, and supported. With that being said, check out Krab (@viktima_del_vicio), Mia Fay (@lilbigmia77), Aldubs (@aldubber), Abe Garcia (@burst_city83), Vincent (@beanzattack), Puerto Rico (@suciarata), Ruth Mora (@_meanmachine), Martha Quintero (@kakitadeluxe), Eddie Patino (@glueaccidentpunks), Dog House Studios (@doghousefotos), and all the artists at Tlaloc Studios (@tlalocstudios).

videoprotozoa: Demonios can be construed as creatures, demons, monsters, but they can also be the feelings or secrets we hide within. Which Demonios do you feel more closely connect to the band? Or do they both?

Kat: Both. I feel that punks often feel like outcasts in mainstream society, and people look at you like you’re a creature from a different planet or something. At least that’s how I felt sometimes within my own family and how I’ve felt in school/work settings. As far as everyone having their own demons (feelings/personal obstacles), we all know that acknowledging those demons and doing something about it is a constant battle. I’m glad we’re able to make music that can address those issues and personal demons in a constructive way.

Alexis: I think that a lot of people can agree that we all have demons inside us whether it's a dark little secret, crazy feelings, or are into the powers of dark magic. Personally, I feel more of the thoughts and feelings are what connect with me and the term demonios. I've dealt with and gone through some shit just like everyone else has and sometimes you find yourself in situations that make you rethink everything and that's pretty fucking dark if you think about it. There’s different ways of coping with thoughts and feelings, you just got to find your poison that suits you best.

Cristian: Our worst enemy and harshest critic are always ourselves.

videoprotozoa: How was playing Lie Detector Weekend back in December 2021?

Natalie: Lie Detector Weekend was cool! The energy was good, and it was nice to play a festival in our hometown put together by people who also grew up in the LA punk scene. We appreciate being able to be part of Volume 1. The only things I can complain about are; the sound guy who abruptly cut us off [laughs] and the spread of COVID, which is inevitable at this point.

Alexis: Lie Detector was a great experience especially sharing the stage with other great bands. I had a good time and ate some food. Shout out Tacos Los Ponky. Seeing a lot of friends and familiar faces was great and welcoming! The venue itself was cool too.

Cristian: It was sick! It was very well organized, ‘Nuff said. Shout out to Jimmy Parasite for having us be a part of it.

Kat: I really appreciate playing shows or fests when it’s really well organized. Shout out to the Lie Detector homies for making sure everything ran smoothly as well as the homies that back lined and helped as stage hands. Y’all know the people back lining are the unsung heroes at shows.

videoprotozoa: The band is about to take a trek up to the Bay Area and back, is touring more extensively something the band wants to pursue in the future?

Kat: Most definitely! Once we get around to making some more merch and recording some new music, we’d love to do a west coast tour. I’d for sure want to play internationally, if possible.

Cristian: As long as work allows for touring, I’m always down for it. We’ve talked about touring Mexico at some point. I think when our work schedules align again, we’ll take advantage and try to play another tour.

Natalie: Touring is definitely something that we want to do more of in the future. This weekend will be the first time we play outside of LA. I lived in the Bay Area for a couple years so I'm really excited to be playing up there on our first little tour. We don't have any set plans for anything beyond that as of right now but I'd really love to play outside of the U.S, specifically Latino America.

Natalie: We definitely want to dedicate some time to work on new songs and hopefully record an EP in the near future. Shout out to 1753 for recording our demo!

Kat: Besides that, playing shows more often and hopefully setting up some tour dates.