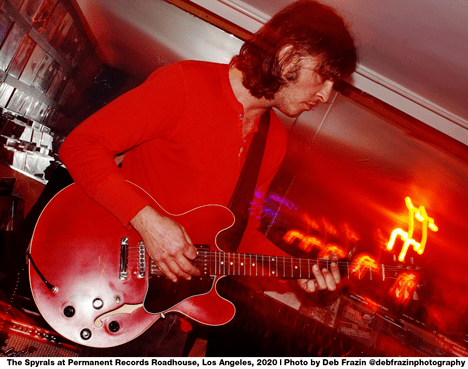 The Spyrals and Golden Grease both played blistering-hot sets at Permanent Records Roadhouse last week. This was another sold-out show at the new music venue/bar/record store, and I’m so grateful I was able to get my ass in there early enough before it sold out, because I would’ve been devastated if I’d missed this show. I knew the two bands were going to deliver great sets, but I had no idea how fucking sick this show was really going to be.

Golden Grease is straightforward, infectious punk. Not only did they play their hot new single, but the rest of the songs were equally as good. I can’t wait for them to finish their new album. I dig this band a lot.

Up next was The Spyrals. If you like heavy psych rock with long, swirling, mesmerizing guitar solos, and songs that’ll rip your heart out, this is the band for you. I could’ve watched them play all night long. I have to mention their drummer Elliott Kiger—he absolutely TORE IT UP. I don’t normally focus too much on drummers, but that guy was fucking incredible. This band’s musicianship melds together perfectly, like ice cream and hot fudge. The Spyrals have been together for over ten years and they just keep getting better with each new release.

Check out The Spyrals’ newest album, then check out the video of Golden Grease that I filmed at The Roadhouse especially for you. Enjoy!