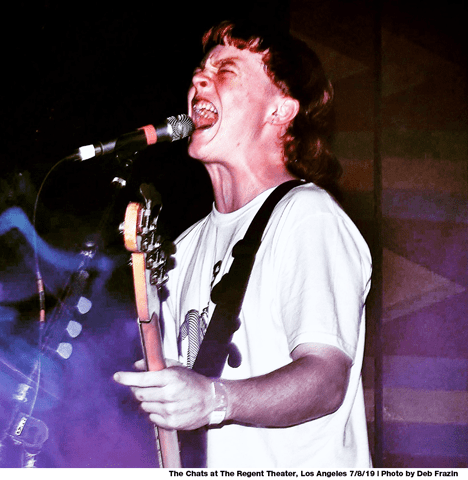 A couple of years ago, I was on the Bandcamp site downloading some music, and I looked at the “recommended” section. I noticed an album by The Chats called Get This in Ya. Well, I DID... and it was love at first listen! Then I downloaded their first EP, and just played The Chats non-stop for months until I was ready to puke.

Last week, my dream finally came true. The Chats came to Los Angeles, and I was finally able to see them play a loud, sweaty, beer-drenched, sold-out show at The Regent Theater. The previous night, I saw another favorite band Amyl & the Sniffers, so this was an Aussie punk “Double Whammy” for me.

As The Chats played my favorites—“Temperature,” “Bus Money,” and “How Many Do You Do”—I was kicked in the head three times by stagedivers, pushed around, elbowed in the back, and brushed up against by topless dudes drenched in sweat; in other words,  A SUPER FUN, KICK-ASS SHOW!

Their manager gave me a photo pass, and I was planning on shooting some great photos of the band, as well as record a song to post with this article, but the photographers had to leave the pit after three short songs because the stagediving got so out of control that security needed the pit to step in and try to guard the stage. Unfortunately, there was no time to record a song (and if I’m not right up front, I won’t shoot video).  If you get a chance, go to YouTube and check out some video from the show!