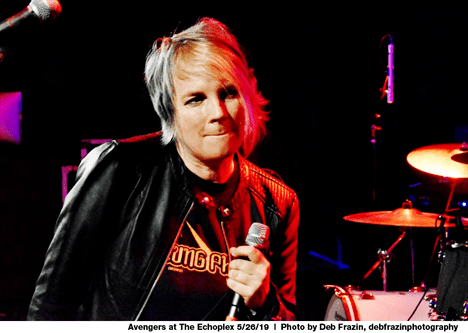 On May 26, The Avengers were joined by The Alley Cats and The Dils at The Echoplex in L.A. for a very special show to celebrate the life of their longtime band member Jimmy Wilsey, and to raise money for Wilsey’s young son Waylon.

The celebration started off with the MC for the evening (Bruce Moreland) introducing friends of Jimmy’s, who came onstage and shared some touching personal stories about their friend. When everyone was finished speaking, The Alley Cats took the stage and played a powerful set. I noticed some new songs peppered throughout the set, and they sounded great. I dig The Alley Cats (they were the first punk band I ever saw in 1980), and I’m really looking forward to hearing the new album they’ve been working on.

Next up, The Dils hit the stage and just about blew the roof off of The Echoplex! I’d recently seen them at the Save Music in Chinatown benefit show, and they were fantastic, but the set they played this night was ABSOLUTELY BLISTERING! When you see The Dils, you get non-stop, high energy from Chip, Giuliano and Brian. I was standing on the stage and Giuliano was hitting his drums so hard my feet felt airborne with each slam. They played every song you’d want to hear (including “Sound of the Rain” and a rowdy cover of Jim Carroll’s “People Who Died”).

Finally, The Avengers hit the stage. I’ve been a huge fan of The Avengers since the beginning (I’ve always believed that their “Pink Album” was the greatest punk album ever recorded). I hadn’t seen them play in a few years, so I was super excited for this show. Of course, they did not disappoint. The band was tight! Hector Penalosa on bass, Greg Ingraham on guitar, Daniel James O’Brien on drums, and of course, my favorite female punk icon Penelope Houston on vocals. Unfortunately, Penelope was suffering with a bad cold that evening, so her vocals weren’t at 100%, but she still did a great job belting out all our favorites like “Car Crash,” “Money,” “The American in Me,” et cetera. It was a top-notch show all the way through, and it will probably take the #1 spot on my “Favorite Shows of 2019” list. A great evening for a great cause.

Four days later, Bruce Moreland and I both caught Penelope’s cold! But how could I be upset about it? It was an honor to catch her cold!

I filmed The Avengers playing “Money” for your viewing pleasure—enjoy!