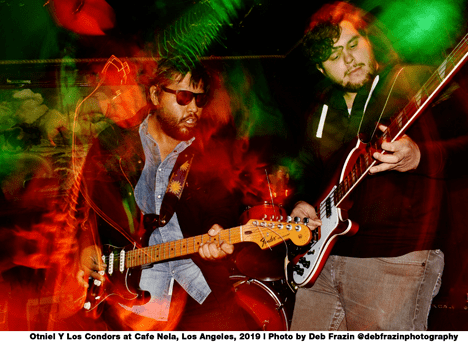 Otniel’s knowledge of early punk rock runs deep, and you can always hear those punk roots in his songwriting. He’s a badass guitarist, and his talent really shines on Flamingo Rosa (he wrote all the songs, and in this band, he takes on lead vocals). The album is drenched in punk and surf guitar (I hear a lot of Sir Bald Diddley and Dick Dale on the album), some Spanish influence is added into the mix, and the result is magnificent.

Flamingo Rosa is one of those albums that’s so damn good, the minute it ends, you have to immediately listen to it all over again. I dig it so much, I can’t even choose a favorite song because they’re all so great, but I think the standout songs are “Fuego,” “Unfinished Business,” and “I Told You So.” This band is the real deal.

Otniel Y Los Condors play shows around L.A. a lot, and I highly recommend you check them out as soon as possible. But first, I suggest you check out the album (it can be listened to on Soundcloud for free).

After you fall in love with Flamingo Rosa, I’ll let you buy me a beer to thank me for turning you on to your new favorite band when you see me out at the clubs.