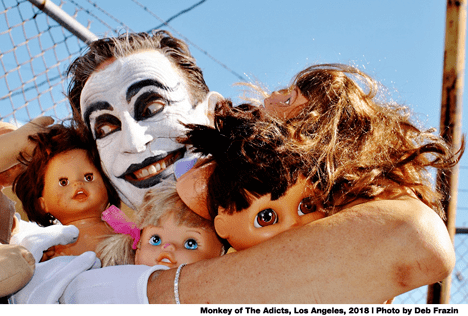 Back in 2018, Monkey from The Adicts contacted me and asked if he could book me for a photo shoot. He chose me because he liked my street photography work and wanted photos that were more on the “darker, grittier side,” as opposed to the usual shoots he was used to doing.

I took Monkey to some particularly run-down, trashed streets in Downtown Los Angeles. He loved it. We found a lot of locations and props that gave us some great photos. Monkey and I had a blast, and we laughed our asses off throughout the shoot. The photo you’re looking at shows Monkey cradling a bunch of dolls he found in a trash dumpster—he just lifted up the lid and there they were! We laughed until we couldn’t breathe!

The most memorable part of the day was when we were walking down a street near Lethal Amounts and a little boy (about five years old) was walking toward us with his dad. I will never forget the look of sheer terror on his face when he saw Monkey in his makeup! The kid turned as white as a sheet then practically disintegrated in front of us. Poor little guy!

This booking with Monkey was one of my favorite photo shoots. The dude makes work FUN!