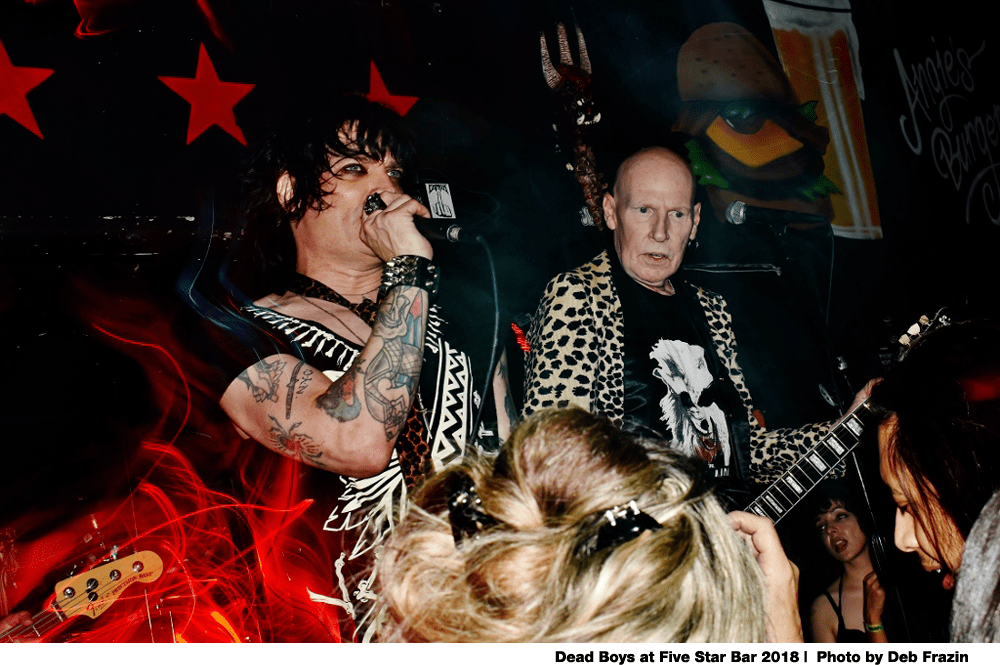 This photo of Dead Boys was shot at Five Star Bar in Downtown Los Angeles in 2018. It was one hell of a rowdy show—fists, beer, glass, and bodies all over the place! In other words, a great punk show!

The Dead Boys have always been one of my favorite punk bands. As I’ve mentioned in some of my previous columns, I think Stiv was one of the coolest frontmen in the punk scene (when he was with the Dead Boys). I loved that voice!

Back in 2018, Cheetah Chrome recruited some new members for a reunion tour. Being a huge Stiv fan, I was extremely skeptical. How can anyone possibly replace him? I decided I was gonna pass on the Viper Room show, but ended up regretting that decision when I saw videos. Their new singer Jake Hout sounded so much like Stiv (and he also had the swagger)!

Luckily, they came around again and played at one of my favorite spots: Five Star Bar in Downtown Los Angeles. I stood outside of the bar for a while waiting on my friends, then all of a sudden, I noticed Cheetah Chrome standing next to me. In my punk rock world, that’s like Mick Jagger standing next to me. Now I was excited. When my friends arrived, we pushed our way through the sold-out crowd, all the way up to the front, and then the fireworks started.

Dead Boys hit the stage, and they were beyond fantastic! Jake was so on point—he totally pulled it off! He really surpassed my expectations. And of course, Cheetah was blowing my brain apart! They were so fucking good! Then the drunk asshole next to me kept grabbing Cheetah’s mic stand and was really pissing him off. The show stopped for a minute while the guy was warned, then next thing I know, Jake jumped into the crowd, and fists were flying everywhere. Glass was flying everywhere. Bodies were flying everywhere (including mine). I saw a girl getting trampled on the floor (with her arm up begging for help), so I grabbed her.

Finally, the band started playing again and burned down the bar with every Dead Boys song I wanted to hear. The crowd went ape shit wild. I walked out of the bar soaked in sweat and beer. It was a truly unforgettable show!