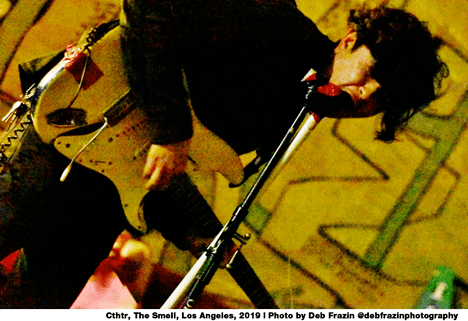 Lately, I’ve noticed a guy who calls himself Cthtr playing some shows with bands I dig a lot, so I thought I’d check out his music on Bandcamp, and see what I’ve been missing. I liked what I heard, and I knew I needed to check out one of his live shows ASAP.

I caught Cthtr at The Smell last week, and his set was even better than I had anticipated! His recordings consist of pre-recorded electronic tracks with keyboards, vocals, and a bit of guitar in spots. I liked the music a lot (the songs are very good), although at certain times the music came dangerously close to sounding a bit “techno-beat(ish)” (a sound I’m not really into). But I knew there was something real good there, and I needed to hear him play live.

I was astonished when Cthtr first started playing. The programmed electro music was good and loud; there was plenty of hot, burning guitar and reverby vocals. And it sounded just like one of my favorite bands, Terminal A! The live set sounded much wilder and intense than the recordings. It was like a delightful punch in the gut.

I hope he includes a lot more of that sizzling guitar on future recordings. It complements his music very well. I can’t wait to see Cthtr play again. If you’re into Terminal A and ModPods, you’ll dig Cthtr.