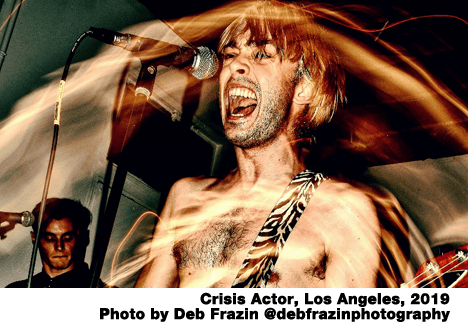 Tony Knox from Crisis Actor and “No More Heroes KXLU” puts on a monthly punk show called “Band Practice.” It was definitely worth driving out to Hollywood on a rainy night for the jam-packed final show of the year

Crisis Actor opened the show with a loud, sweaty, blazing-hot set—this was their best set I’ve seen so far. Absolutely amazing! I’m hoping they have an album in the works, because I really need some Crisis Actor on my turntable.

Next up was Safe Word. Hardcore at its finest—lead vocalist Jane Pain and the band melted our faces off. The final band of the evening was Le Face. This was their first show in seven years, and I was super excited to see (and shoot) them. I was up front, and the second they started playing, all hell broke loose. The pit went FUCKING BONKERS! Beers flying, chicks crawling on the floor trying to get up, elbows flying, monitors almost falling over... you know, the usual punk pit typhoon stuff.

I’ve said this before, and I’ll say it again: You know you were at a fun punk show when you wake up sore from head to toe, your ears are ringing, and there are a few bruises on your body. My chin still hurts.