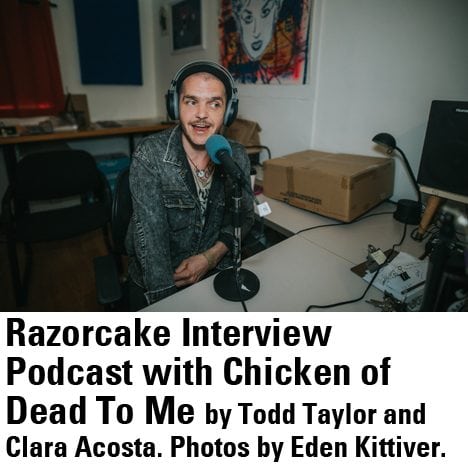 My version of punk isn’t about perfection. It’s about persistence and staying relevant to yourself. I’ve known Tyson/Chicken for close to fifteen years, before Dead To Me was a band. I’m glad Chicken’s not dead. Through the grapevine, I’d heard that he’d been in rehab several times and struggles with addiction. It’s through that lens that I approached this interview. Chicken is the main catalyst and conductor for Dead To Me. He’s a sharp, funny guy who is responsible for some great punk music. During this podcast, we discuss “middle p”—the “big P” being politics-politics and the “small p” being the personal-as-political. “Middle p” is melding the two, while adding some poetry into the mix.

Chicken’s almost lost it all several times because of drugs.

Before this podcast got rolling, Chicken and I talked about GG Allin and his strange staying power. We both agreed almost his entire music catalog is awful. (His cover of Warren Zevon’s “Carmelita” was the exception that came to mind.) GG had nowhere else to go after eating his own shit on stage and punching his audience. He failed at killing himself on stage. And yet the romantic notion of the nihilistic artist—up to their gills in drugs and drowning in liquor—persists.

So what are the options when you’re older—decades in? And a punk. And a fuck-up. And still not giving in? And not dead? And struggling with sobriety? That’s what Chicken and I talk about. Here are the Cliff’s Notes: I quote Chicken to himself from 2009 and 2016. We both agree that with advanced age, it’s good to get some stretching in. To eat food. To drink water. To take showers. And to wash your D.A.R.E. shirt.

Thanks to Clara for her “Clara-fication” segment and to Eden Kittiver for taking photos during the podcast.