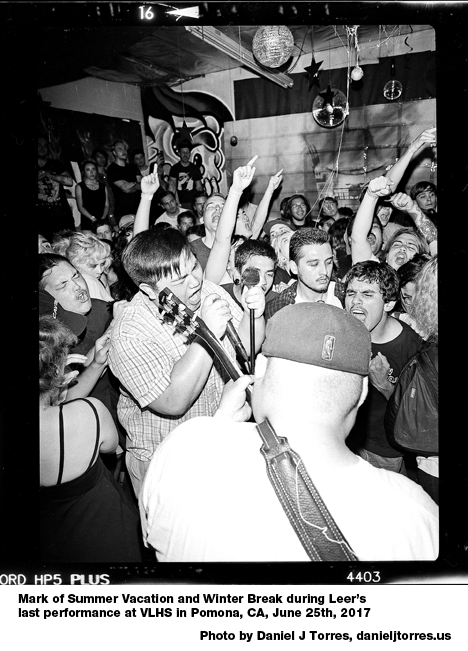 Often, the marker of the loss of innocence in a child is when they come to understand that things, namely life, ends (usually this happens during a certain scene in the Lion King). The attached photo brings up feelings of something like that to me because of how many endings it represents: Leer’s final show after a relatively short (although decades-long in emo years) run, finally getting the closure on Summer Vacation / Winter Break most of us had been seeking for some time, and the news that spread throughout the crowd that night that the beloved VLHS’s doors would be closing for the last time, after more than five years of what I personally believe embodies DIY more than almost anything I’ve come across after almost a decade of participating in this funny big-little community.

That night the air was thick with bittersweet endings, like that last party before graduation (and also the sweat of 150+ friends packed into a room no fire marshal would allow probably more than twenty-five people in). One of my favorite things about photographing at VLHS was the unique perspective I got when I was able to squeeze behind an amp or drummer on stage. From there, I was able to see the faces of people losing what had been their home away from home for so long or the band(s) that sparked their interest in punk or DIY in the first place.

I got to thinking about my first Summer Vacation show back in 2010 at a kickboxing club in Old Town Pasadena (with Wilderness and They As In Them!) and how formative that show was for fifteen-year-old me. There, I met my friends Andy and Laura who played in Wilderness together and would become some of my best friends over the years, Aaron K. (Lauren Records and drummer of SV), who I’d been emailing frantically that week about the location of the show, gave me copies of SV’s first two EPs that are still some of my most treasured items and favorite recordings of all time, and I, someone who had missed so many shows by that point because I couldn’t find anyone who wanted to come with me, figured out that it was okay and even fun for me to go to shows alone.

Then Leer started playing Summer Vacation’s “Post You” and Mark got on stage to help sing. In that moment, seeing everyone in the crowd screaming the lyrics and all the smiles across the stage, I realized that there isn’t anything we should be sad about. Punk bands and DIY venues will always be ending and that’s okay. If they’re doing their job right, they should be showing the next generation how they too can and should do it themselves, and god damn did everyone in this photo do it right! I want to thank Tim and everyone at VLHS for not only their hard work, but for showing so many—myself included—what can be done without presale tickets or stage barriers. I also want to thank everyone in that room who played or just attended, especially those that I’m able to call my friends, for being a part of something that has given me more direction than any schooling or mentor ever has. There are still so many others out there that are looking for the same. Let’s get to work.