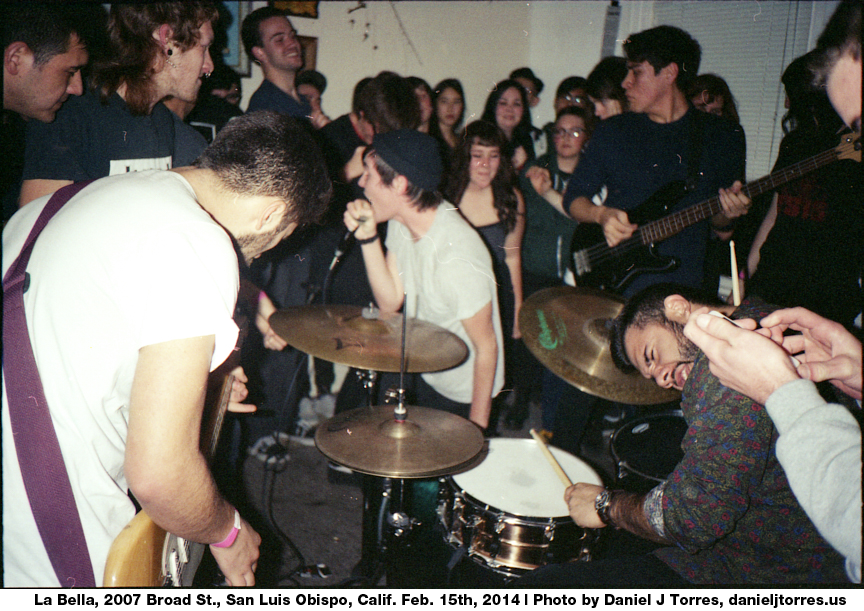 To me and the few people I asked just now (my two roommates), 2014 was the latest “high point” DIY in California had. There was an abundance of DIY spaces and venues throughout the state, plenty of diverse bands to fill out the lineup, and people willing to come out on a Tuesday night. There were even a handful of DIY fests that people planned their lives around to attend or help organize. One of those was the legendary NUX Fest, which happened every year, usually around Valentine’s Day, in San Luis Obispo, Calif. Essentially, it was just a few house/warehouse venues within walking distance of each other that held shows simultaneously over a weekend, but those who attended knew it was much more than that. It’s central location made it the prime meeting ground for punks from northern and southern California and beyond to come together, often reuniting friends that had been separated by school, work, or whatever it may have been (dare I declare it the KALI DIY Summit?).

I was first NUX’d in 2013 (NUX V), tagging along with my brother’s band, Tough Stuff, and carrying way too many cameras. While I had been going to DIY shows regularly for some time already, I had only been to a couple outside of the San Gabriel Valley at that point. Tough Stuff played a set that included a Green Day cover at Crossroads, an enormous punk mansion/tree house with an in-ground shower that my brother and I still talk about to this day, then we set off to explore the rest of the shows.

To say the least, it was wonderful seeing punks of all sorts running between venues in the middle of unsuspecting suburbia to catch a band’s set, towing backpacks full of Rolling Rock and/or replacement parts for the PA. It was easy to not expect much in the way of organization but (and this of course is from an outsider’s rose-tinted perspective) everything seemed to easily fall into place. There was a collective effort to keep the shows going and make sure everyone was having a fun and safe time, from the equipment being shared amongst bands, to those corralling people drinking outside the venues (something that played a role in the fest’s eventual demise) back out of sight or keeping a packed living room quiet while Matt M. (SLO resident and a NUX fest organizer) talked their way out of another noise violation ticket and into a ticket for blocking the sidewalk (a band with all of their equipment were waiting for their van to pull around).

The second we walked up to 2007 Broad Street, a staple SLO house venue that has drifted in and out of inactivity over the last ten or so years, we ran into a large group of SGV punks, comprising of the bands Stresscase (this would be their last show ever, if I’m not mistaken) and La Bella. Although I was already familiar with these people, having seen them and their bands around since I started going to shows (I specifically remember Jesse M. from Stresscase greeting us by saying “Hey look, some locals!”), it wasn’t until NUX that I started to become close with them. During La Bella’s set, Cameron H. (vocals) talked about a collective he and a lot of that same group of people had been involved in for over a year, whose goal was to open a meeting space and community center in La Puente, Calif. within the next couple of months, a regular between-songs topic of Cameron’s for almost as long as La Bella had been playing shows, but I’ll get into that whole thing another time.

Fast forward a year and I’m crammed in Cameron’s parents’ Suburban with the rest of La Bella and a few other friends on our way to NUX VI, trying and failing to get anywhere on some work for my Chemistry class I had skipped to be there, while The Mars Volta blares through dying speakers. I trade my small seat for an even smaller crevice my friend and future roommate Charlotte N. had found between Andy Z.’s (guitar/bass) amp and the front door of 2k7 for one of the most memorable La Bella sets I’ve seen to date. As people overflowed into the kitchen from the tiny living room that bands played in at 2k7, a few unlucky (or, depending on how you look at it, lucky) ones who couldn’t make it inside, crowded around the room’s two windows, looking on at the mess of people, instrument, and furniture, at times unable to distinguish performer from a member of the audience.

La Bella’s drummer, Daniel F.’s kit lasted maybe forty-five seconds before someone fell into it, eventually resulting in Alex V. (drums in Left Astray and now Amygdala) and Nik S. (guitar in Calculator and tongue* at the time, now Nylon Smile) having to hold it in place for him for most of the set. Cameron’s vocals went unamplified for whole songs at a time while someone out of sight frantically rearranged a tangle of microphone and speaker cables that were constantly being unplugged. John M. (bass/guitar) looked over at me with an expression of resigned amusement as the band attempted to get through a set of their unique blend of energetic hardcore punk informed by both Latin and jazz rhythms and insightful lyrics that act as a far left of center call to arms for a community that didn’t need to be close geographically to be tight knit, to aspire to something larger than themselves and to actually organize themselves to get that done.

Just briefly reminiscing on NUX fest makes me realize that it was/is easy to forget then and now that just participating in this community is inherently anti-capitalist and revolutionary, and not to mention beautiful. While a good portion of that beauty was just catching up with friends, sometimes with a beer or five, it has become clearer to me that organizers and artists alike were making a space for art and community outside of the stale, exclusive avenues capitalism provides for us. It was through experiences like NUX fest that I saw that maybe we weren’t just a bunch of crazy kids screaming our cares away; that we were trying to create an outlet for real change through art, by and for our community. I think we need that reminder now more than ever, when it feels like the dirt is being shoveled on us by the state and capitalism at large faster than we can dig ourselves out, that we have the tools and power to take control of how and where we express ourselves and, from there, we can do and take on almost anything.

(Fun fact! I first published this photo as one part of a diptych, the other photo ended up being used for La Bella’s album Ides artwork!)