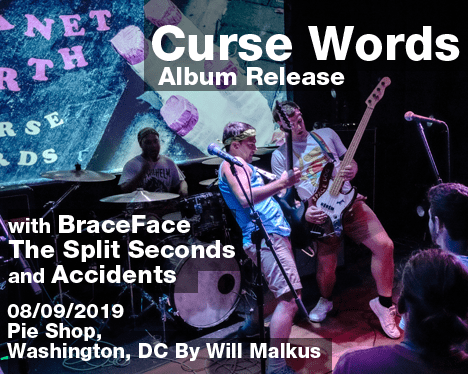 Curse Words Album Release with BraceFace, The Split Seconds, and Accidents, 08/09/2019 at the Pie Shop, Washington, DC By Will Malkus

It’s a hot Friday night in the Pie Shop and Curse Words is finishing up some last-minute tuning as I squeeze my way to the front of the crowd. I’m posting up to take pictures when a drunk guy in a trucker hat next to me puts his hand on my shoulder and leans in.

“Hey dude, I’m gonna stagedive. You got me?” he asks. I look down at the stage, which rises about a foot off the floor we’re both standing on.

He beams at me. “Nice!” he says and turns to the stage, right as three of the four members of Curse Words take the stage and launch into the first track off their new album Trash Planet Earth, “Bikini Atoll.” So did my new friend actually stagedive off a platform that didn’t even come to our knees? Boy, he sure did try his best.

Before Curse Words played, however, we were treated to a remarkable run of opening acts from the greater Washington metropolitan area, with Laurel, Md.’s quintessentially pop punk basement dwellers BraceFace leading the charge. Not since Spraynard released a single called “Applebee’s Bar” has there been a band as wholeheartedly unabashed about their life in the suburbs as these guys, but BraceFace are certainly doing their best to contend for the belt. Backed by a video montage curated from the depths of a “skate video” YouTube search, David Delarosa (on lead vocals and guitar) performed his own set of acrobatics, leaping from lead guitar and vocalist Mitch Nelson on one side of the stage to bassist Sam Grysavage and back again in seemingly the blink of an eye. From behind the drums DC Cannistra laughed at the antics without missing a beat, keeping time to a truly impressive variety of tempos across their set.

BraceFace plays caffeinated pop punk sugary enough to give the Descendents a cavity and have a catalog that spans almost a decade of DIY(a DIYcade, if you will) EPs and LPs. At their best they sound like a more socially aware Teenage Bottlerocket, best illustrated on tracks like “I Don’t Wanna Leave My Room” and “Mayonnaise Jar,” which address the one-two punch of depression/anxiety and the lack of a fair living wage for workers in the food service industry respectively, and their best is exactly what they brought to the Pie Shop. I’m always excited to see them in action, whether it’s supporting another band or playing one of their own house shows. If you’re in the DC-Maryland-Virginia area and you haven’t checked out a BraceFace House show yet, do yourself a favor and fix that.

Next up were the Split Seconds from Washington, DC. It’s been a big couple of years for them: 2018 marked the release of their second album Counterfeit Reality as well as wins for both Best Punk Album and Best Punk Band in the Washington Area Music Awards, and 2019 saw them taking the stage at Punk Rock Bowling in Las Vegas. There’s a little bit of rockabilly polish on their old school punk sound that pairs well with Drew Champion and Alex Massi’s tag-team shredding, as well as the casual and unhurried way that Champion delivers the majority of their vocals, though throughout their set he slides smoothly between the Ramones to the Buzzcocks to the Dead Kennedys.

The Split Seconds have been building a brand through their 1970s throwback sound over the last couple of years but that’s not to say they’re copycats; there’s a lot of complex musical layers on both of their albums. Where a large strand of modern punk tends to be built on a foundation of a certain degree of sloppiness (intentional or not) the Split Seconds’ tight arrangements and clean harmonies are clearly labors of love from a band full of exceptional musicians. This was my first time seeing them play as a full band and the fact that their songs work well with two acoustic guitars or the standard two-guitars-one-bass-plus-drums arrangement says a lot about the care they’ve put into them, especially when it comes to the earworm-y guitar riff that kicks off my favorite song of theirs, “Is This What I Get?”

After a short break to enjoy the weather on the Pie Shop’s patio deck I made my way back in to the venue in preparation for the next band. Up at the front of the stage where Accidents was setting up, one of the guys in the crowd noticed a wireless mic center stage.

“Oh, is he gonna move around?” he asked rhythm guitarist Nicole Morris, who smiled knowingly.

“He’s gonna move around,” she confirmed.

“He” is frontman John Felter, and because I’ve seen Accidents play once or twice before I knew what was coming next. There’s a lot that Accidents have going for them: shred-heavy guitars, driving basslines, incredibly energetic stage antics, but Felter is their secret weapon. He spent the majority of their set running through the crowd, hanging off the stage’s lighting fixtures, standing on cabs, and climbing the very walls of the venue. Barely two songs in the crowd was already losing their minds, opening up pits that Felter immediately hurled himself into and hoisting each other aloft.

Accidents only list one credit under their influences: Tony Hawk’s Pro Skater 2, and while that is a common joke in punk rock it only takes a few minutes of listening to Accidents to know they’re dead serious about it. The interplay between lead guitar Matt Hanson, the aforementioned Nicole Morris, and bassist Dan Boyd is nigh flawless, and it isn’t often that I can get my chugga-chugga guitar fix at a predominantly pop punk show. I would be remiss if I didn’t shoutout the hilariously titled and absolute jam “There’s Always Money in the Banana Stand” as well as their cover of The Proclaimers’ “I’m Gonna Be (500 Miles)” that brings the house down every time. Their set ended with Felter carried bridal style in the arms of one audience member, still belting out the final chorus of “Drunk S.O.B.” and leaving the crowd trying to catch our collective breath.

Shortly thereafter, it was time for my new friend to stagedive onto me mid-picture. Curse Words were down one bassist for this show, which meant that Tommy Colliton was stretching his bass muscles while still holding down vocals and leaving Peter Grillot with all of the guitar parts. Some of my favorite parts of Trash Planet Earth are the noodle-y guitar bits so this switch left me a little disappointed, but it turned out Grillot was more than up to the challenge and I could barely notice a difference.

This was my first time seeing Curse Words live and they more than lived up to my hype, but I was truly blown away by what a beast of a drummer Craig Hall is live. If you’re unfamiliar with Curse Words, it’s important to understand that their albums tell the continuous story of a group of intergalactic adventures traversing the universe. Trash Planet Earth sees the heroes arriving on a doomed planet called earth, continuously musing over the question, “would the universe be better off without us?” This subject has been on my mind a lot recently, not just because of Curse Words but because of the crushing weight of all the bad shit happening on our planet that we’re constantly assaulted with every day. It was helpful to hear it all put to words and melody by these guys, because even while examining the darkest parts of humanity there’s a sort of upbeat serenity that undercuts all of their music. I don’t quite know if all of that translated to the crowd at the Pie Shop, but they also threw inflatable extraterrestrials out into the crowd so that was pretty cool too. Despite the heavy subject matter of Trash Planet Earth, by the end of the show we all became one laughing, smiling mass of friends who were able to shed our anxieties and revel in our own sweaty, messy humanity.

And when one guy in a trucker hat leaped off the stage blindly hoping to be caught, we all did our best to save him.

Will Malkus is a writer, librarian, and concert photographer based out of Baltimore, Md. You can check out his photography portfolio at charmcorephoto.com/.