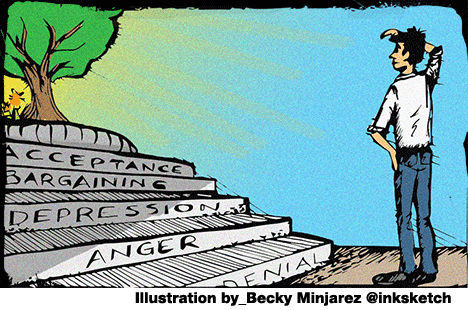 Confronting Abuse: The Complexity of Grief by Will Kenneth

Before I started counseling, my friend Jon encouraged me to follow through on my plans to get help.

“Will, I’m proud of you for wanting to go to counseling,” he said. “It’s going to help you, but it’s going to be hard. You’re going to have to confront things that make you uncomfortable.”

I was like, “Yeah, I know dude. I can handle that.” He was right, though. The first session was tough, but the real gut punch came months later.

When I first started writing for Razorcake, I wrote about learning to create boundaries with my abusive narcissistic father. I was tired of him treating me like shit, and I believed I could get him to stop. Though I had success getting him to change some behavior in the past, I didn’t understand what his condition meant for our relationship.

When I first realized I was abused, I became overwhelmed with an avalanche of new information. I began to process pain I didn’t even know I had. Though I could tell you about narcissists, I didn’t grasp what it meant for my dad to be one.

Shortly before submitting my first column, a lone gunman shot up a downtown Jacksonville bar hosting a Madden NFL 19 video game tournament. Two people died in the shooting and part of it was livestreamed across the internet.

When the news started trickling out, I was glued to my phone, impatiently waiting for everyone I knew who could have been there to say they were safe. Thankfully none of my friends attended the tournament, but we were all shaken and worried. Immediately I emailed and texted my family to let them know I was safe, too.

My dad responded by sending a picture of my daughter on a motorized toy car he had bought her before his most recent visit.

My dad: The FBI just posted pictures of the getaway driver

A few hours passed before I heard from him again. I didn’t realize it, but he was likely sitting at home and stewing over our exchange.

My dad: You continue to be very critical

Me: Rachel and I are very shaken, and it’s not unreasonable to let you know that your joke was unappreciated. If you would like to apologize I would forgive you

Me: I know I didn’t say it in the nicest way but the shooting has us very upset

My dad: Sadly this has nothing to do with silly humor. Your anger saddens me. It’s been a long time. I’m turning the phone off

Me: Don’t misinterpret my criticism as anger. It’s not. If you can’t handle criticism that’s for you to deal with.

While it’s true that I’ve been critical of my dad and that I’ve shown him flashes of anger, that’s been part of the push and pull of setting new boundaries with him.

However, I made clear to him that he upset me. He twisted this moment to be about him and dismissed how I felt on a tragic and frightening day. Afterward, I didn’t hear from him again for nearly two weeks.

I never received an apology, and here’s why: Narcissists don’t have the ability to take a critical look at themselves. They can’t apologize for their actions because they would have to admit to themselves that they did something wrong. If you do get an apology, it always comes with a caveat to justify their actions.

At the time, I didn’t totally get that. I felt disgusted, and I needed help to come to terms with what happened.

A few weeks later I met with my counselor. We talked about the shooting, my dad’s behavior, and what I could do. I was at a loss. I said that I continued to set boundaries, but he still finds ways to be manipulative and to make me deeply uncomfortable.

At the end of our hour-long session, she dropped a truth bomb that broke my heart and left me shaken.

She said, “Your dad was the not the father you needed.”

What she meant was that my dad isn’t going to change, no matter how hard I press him. He’s never going to put others before himself or be empathetic. For me to accept my dad, I would need to accept that he is manipulative, self-centered, and hurtful.

I didn’t realize it then, but that night I started mourning.

After taking a little time to digest what I heard in counseling, I started to pull away from my dad. I felt raw. I tried to keep him at a distance, but the more I pulled away, the more he would try to manipulate me, which would make me pull away more.

Finally, after ignoring his texts and emails at the start of the new year, I blocked his phone numbers and his entire business email domain. Short of randomly showing up at my house three hundred miles away or sending letters and packages, he had no way to reach me.

The decision didn’t happen overnight. I had been thinking about it for months, but once I decided to follow through, I felt like I made the right decision. Finally, I was free of him.

My counselor wasn’t convinced I made the right call.

“You’re being black or white about it,” she said. “It’s okay to not want to see him now. You can say you need some distance, but cutting people out is learned behavior from narcissists.”

She caught me off guard. “I thought it was okay to cut out abusers,” I said. “I look online in support groups, and I see people share that advice constantly.”

“That’s because they learn to do that from other narcissists, too.”

I tried to be receptive to the rest of what she had to say about trying to remove my dad from my life, but while we were talking through it, I also had to acknowledge what I’ve read online may not have been right for me.

Frequently I see people recommend cutting toxic family out of each other’s lives, both on Facebook and in subreddits like r/raisedbynarcissists. I understand why you’d want to do that, but it’s not a one-size-fits-all solution, and my counselor showed me why.

The decisions I make don’t just impact me, I also have a family to worry about. Blocking my dad put my wife in an uncomfortable position where she’s still talking to my dad and trying not to be caught in the middle. If she wants to stay in touch with him, that’s her decision; I can’t control what she decides to do.

Also, my dad still attends family events like weddings and holidays. If I want to see the rest of my family, that means facing him, which I’m not ready to do. By cutting him out, I have to avoid my entire family during get-togethers. Even blocking him on my phone can’t completely stop him from reaching me, so setting that boundary isn’t foolproof, and it may end up hurting me more in the end.

As the session continued, my counselor touched on what I’m going through emotionally.

“The reason you’re pushing your dad away like that is because you’re grieving,” she said. “Do you know about the five stages of grief?”

“It’s also called the Kübler-Ross Model. Right now, you’re in the third stage: bargaining. Cutting out your dad is you negotiating through your grief.”

My counselor caught me off guard again. I hadn’t realized it until then, but she was right. Sure, my father is still alive, but that’s just one part of what makes grieving abusive relationships complicated.

The Kübler-Ross Model has five steps, which people don’t always flow through neatly. You can skip steps or go back to an earlier one. The steps are:
Denial
Anger
Bargaining
Depression
Acceptance

These steps typically apply to people who are coping with death, but they also fit when people recognize abusive relationships for the first time (or when experiencing other types of loss).

As a survivor of abuse, recognizing grief is complex. Eventually you acknowledge that underneath the loving relationship you idealized are red flags you buried to survive. Suddenly realms of painful truths become validated alongside all the memories that brought you joy.

I felt deep loss for never knowing what it was like to have a supportive father who would allow me to chart my own emotional growth. As collateral damage, I felt loss for all the relationships I failed to grow due to my own stunted emotional development.

I felt deep loss when I realized I spent most of my life being manipulated into giving away power that I didn’t even know I had.

I mourn the false closeness of our relationship, which survivors of abuse frequently experience with their abusers.

I mourn the lies, because not a single thing he has ever said can be trusted now. That includes everything about his past and our family. I don’t know what’s true and what’s been projected to build his ego.

I mourn the good memories, too. Despite how he treats me, I still remember him doing dad stuff like playing catch or taking me to the emergency clinic after I caught a friend’s baseball bat with my face, though those times now feel distant and foreign.

At the end of the five stages is acceptance. Reaching acceptance doesn’t mean you have to be okay with how you were treated. It means recognizing what you went through and coming to terms with it.

Though reaching acceptance doesn’t mean your work is done. I can accept that I’m a survivor, but I still don’t know if I can accept my dad again. Maybe I still need to do more work on processing my grief. Or maybe I’m better off without a person who sees me as his personal punching bag.

In the meantime, I’m going to keep going to counseling and working on me. I’ll figure it out in time, even if it’s not today.

One thing’s for sure, I’m not going to shut up. Talking about my pain is one way for me to heal, and I know talking about my experience doesn’t just help me.

Let’s not minimize what we went through. By talking about our trauma, we can help each other work through our grief, and we can help others recognize those red flags when they couldn’t before.

Our abusers want our silence, because staying silent allows them to continue preying on others. Speaking out is an act of rebellion against those who hurt us. When we learn about their tactics to manipulate, lie, and confuse us, we can reclaim our power from them.

So yeah, I’m going to speak out. I want the world to know I’m grieving the abusive relationship with my father, and I won’t be shamed into silence.