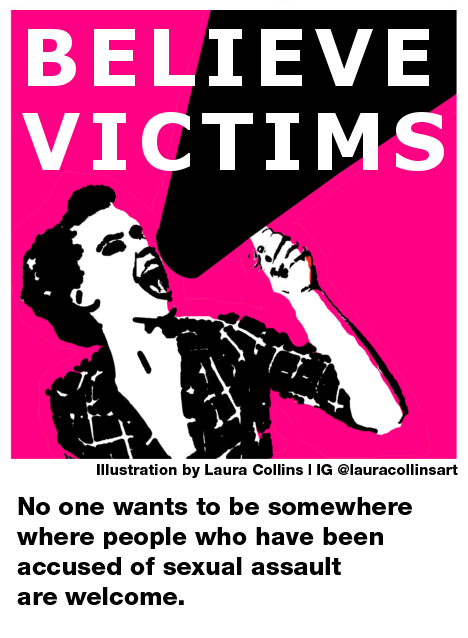 Confronting Abuse: Dealing with People Accused of Sex Abuse in DIY Spaces by Will Kenneth

Confronting Abuse: Dealing with People Accused of Sex Abuse in DIY Spaces by Will Kenneth

The confirmation of Brett Kavanaugh was gut-wrenching to watch. We fought bitterly to oppose his nomination, then watched a man accused of sexual assault be confirmed to a lifetime judicial appointment in the highest United States court.

The drawn-out confirmation process was like watching a car crash in slow motion. We knew it would happen and we couldn’t stop it. Those of us watching from the sidelines became collateral damage.

We turned to social media to cope, and in turn shared stories of sexual trauma to help grieve and find commiseration.

Reading these stories and talking to friends about their assaults and abuse broke my heart, but what surprised me (and it shouldn’t have) was how many of them involved people or shows in the punk community.

I want to believe that shows and festivals and DIY spaces can be safe for everyone, but just because we’re all into DIY punk together, doesn’t mean we don’t have predators walking among us.

We can choose how we react to information that someone might be a sexual predator in our midst. Too often people seem content to either bury it, or just don’t know what to do with that information.

Of course, believe people who come forward about their sexual abuse. If you learn anything from the brave actions of Christine Blasey Ford, it’s that sex abuse survivors have next to zero to gain and everything to lose. Several news outlets reported in October 2018 that Ford and her family were still unable to return home due to ongoing threats against their lives.

I’m going to outline some practical steps you can take to support survivors of sexual abuse.

If you hear someone accusing one of your bandmates of committing sexual abuse, the best thing you can do is listen to the people saying they were victimized and ask the band member to step away.

What you risk by staying silent or doing nothing is potentially putting your fans, other bands, and anyone you work with in danger every time that person is with you. You also risk losing people’s trust in you and damaging your reputation as someone who remains silent about sex abuse.

If you don’t know how to respond to the accusations online through social media or in a press release, consider using this form I’ve written for you below. I can’t know your situation, but I believe this is one way you can approach it. If you choose not use to the form, or have a better idea of how to move forward, at minimum remember to be empathetic to those speaking out.

“We recently heard allegations of sex abuse committed by (band member). While we are trying to gather more information about what happened, we’ve asked (band member) to exit the band. We don’t want to put our fans at risk by bringing (preferred pronoun) to our shows. If you believe you have information about what happened or would like to share a story of your own with us, please contact us at (your contact information). We will keep anything you tell us in confidence.”

If the accused is the main songwriter or band leader, and there’s no way to have them step aside, you should quit the band and try to convince everyone else too as well. You might not be able stop the person accused from doing shows for long, but you can at least protect yourself and protect others by announcing your departure. If you’re making a social media post or press release, consider using my form below. As I mentioned above, this is one way to get ahead of this and do the right thing. You don’t have to use the form, but when speaking with people, remember to be empathetic and to listen to those coming forward.

“We recently heard of sex abuse accusations committed by (band member). While we are trying to gather more information about what happened, (I decided/list of band members decided) to exit (name of band). We don’t want to put our fans at risk by continuing to play shows with (band member). If you believe you have information about what happened or would like to share a story of your own with us, please contact us at (your contact information). We will keep anything you tell us in confidence.”

Quitting a band or a project is a tough decision to make. After all, you put a ton of time and energy into making it the best you could, and starting over is no easy prospect. However, the people coming forward are also struggling with their trauma. Quitting the band will help make them feel validated that they made the right decision to come forward. Plus, you don’t want to be known as somebody who condones sex abuse through silence.

If you booked a band at your venue or festival, you can choose who gets to play there. Just as you choose not to book white power bands, you can choose not to book bands that have been accused of sexual assault. Did you fuck up and book one? Consider stealing this form I wrote for you. Again, you don’t have to go this route to try to correct your mistake, but at least remember to be sympathetic and listen to people speaking out.

“People have been telling us that (band) on our bill (date) have been accused of sexual assault. Out of a sense of caution for everyone who will be at (your venue/ festival), we decided to drop them from our lineup that night. We take accusations of sexual assault seriously, and we want to ensure a safe environment for everyone at (venue/festival).”

If you have a contract in place and can’t drop the band from your lineup (that sucks), announce that you’re willing to offer refunds.

“People have been telling us that (band) on our bill (date) have been accused of sexual assault. Unfortunately, due to standing contracts, we are unable to cancel the event. We take accusations of sexual assault seriously, and we want to ensure a safe environment for everyone at (venue/festival). We will be offering refunds to anyone who feels uncomfortable attending, and we will not allow them to play here again in the future.”

While the most important part of taking these actions is to protect people in your space, you should also consider that if you don’t, those same people will stop attending, playing, and working your events. No one wants to be somewhere where people who have been accused of sexual assault are welcome.

If your employees or business partners of these spaces, and they don’t respond well to accusations of sex abuse, get out of there. I’m not saying quit your job right away, but if they don’t see a problem working with people accused of sexual abuse, then they probably won’t give a fuck about what happens to you.

Ultimately, spaces for these bands cannot exist without all of us. We each have a small slice of responsibility to withdraw support from bands or organizations that have been accused of sexual assault or condone those acts with indifference.

On a personal level, I would love to go see TSOL on tour next year. Jack Grisham’s music, and even the music TSOL made without Jack, is something that I have fond memories listening to as an impressionable baby punk in my teens.

In an interview for the documentary movie American Hardcore  (full disclosure: I only read the book), Jack describes himself as a rapist. The movie was released in 2006, and since then our community is less willing to overlook stories of rape. To the best of my knowledge, the interview raises questions that have gone unanswered. Was he joking? Was he calling back to a previously unknown assault that went unreported? Was he talking about the time he married a girl in her teens while he was in his mid-twenties (which also sounds pretty predatory)? I don’t know. Honestly, I can’t imagine any answers that would sit well with me. I can’t know what he meant. As a matter of good praxis, I’m going to sit the TSOL show out. Solidarity with victims of sexual assault is more important to me than one night of fun, especially if it means having to compromise my values.

As a cis-het-male, I have the freedom to mostly not worry about being sexually assaulted, but that doesn’t mean I’m not concerned about everyone else.

As a community, I’m glad we’ve started asking for more from each other, but some people haven’t gotten the memo yet. I hope this column provides helpful tools to deal with people accused of sexual abuse. So honestly, I’m going to ask you to share this. Email it, print it out, or share it on social media and give it to your friends, bandmates, business partners, loved ones, et cetera.

I’m not asking you to share this to get some kind of ego boost or to get likes on a social media platform. I want us to use this as an example for how we should treat people who are accused of engaging in predatory behavior. Words are meaningless without action. I’ve outlined basic tools to talk about what we should do, and it’s up to you to decide how to use them. I just ask that you do something instead of staying silent.

We have the ability to shape our community spaces, and we need to make them safe for everyone to contribute to them.