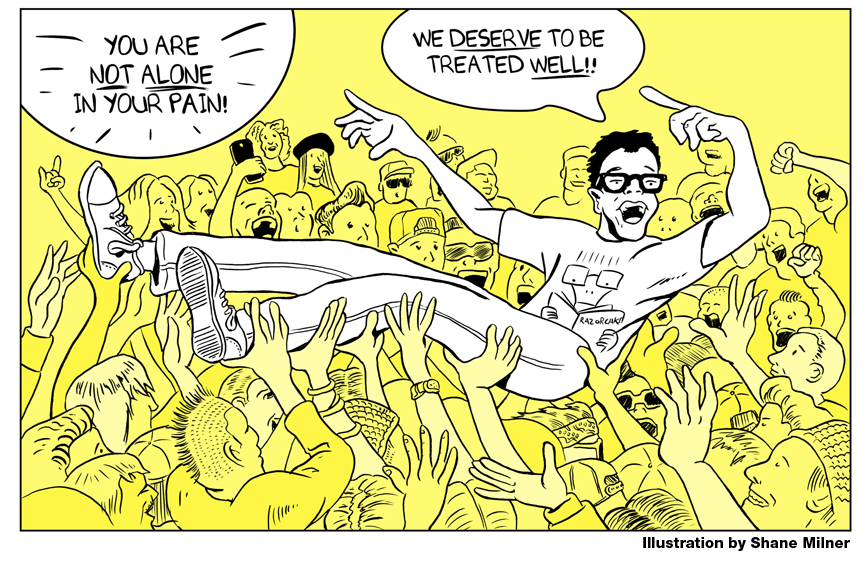 Confronting Abuse: A Tie That Binds Too Many of Us By Will Kenneth

I was at work when I figured it out. My PC was running slow late in the afternoon, and I was scrolling through Facebook mindlessly on my phone. A friend shared a Bustle article 9 Signs You Have A Toxic Parent.

“Oh, this oughta be good,” I thought, laughing to myself a little bit. Reading the article, I hit 9 out of 9 checkboxes, and I immediately felt unmoored.

For all the times we said, “Punk rock saved my life.” Or, “I never thought I’d live to see eighteen.”

For all the times we were humiliated, neglected, groped, manipulated, threatened, struck, or raped.

For all the times we planned our escapes, ran out the door, lived on the streets, squatted in abandoned buildings, or hopped trains.

For all the times we coped by withdrawing, drinking, getting high, or harming ourselves.

Domestic abuse is a tie that binds too many of us in punk. It underpins our friendships. We might find ourselves bonding on porches and balconies, sharing stories of abuse and how we put up resistance, talking until 6 AM when the sun is coming up.

We create art and write songs to cope. Just this past July, Piper Maru released an EP Most of My Friends Died in Space. The last track “Control” describes emotional, verbal and physical abuse.

My favorite Maximum Rock’n’roll columnist George Tabb frequently wrote about his abusive father. Having someone like George Tabb write about their abuse was crucially important for me growing up as a teenager in the early 2000s. Before I found his column, I don’t remember anyone talking about their abusive relationships. I found someone I could identify with, and it was inspiring and empowering to know others were out there like me.

And now I want to do the same. I’m speaking up. Not all of our experiences are the same or as severe, but that doesn’t make them any less valid.

To this day, I am still subject to verbal and emotional abuse by my father.

When I was younger, I was frequently told, “I have never hit you.” This was a form of gaslighting, to make me believe his constant put downs and manipulation were somehow okay. Violence was always looming under the surface anyway: the seething rage over minor offenses, the empty threats of violence toward others, the presence of guns and rifles in the house.

I’m not sure how much my friends knew, but they knew enough not to visit me at home. They were terrified of my dad. Honestly, I was scared too, but I normalized it.

It’s frightening to talk about. It makes me shake to write it down and give form to my fears. My dad could find this article and use it against me. For narcissists like him, fear is a currency to control. Fear buys silence and compliance. Speaking out or disagreeing is not tolerated, and doing so risks more yelling and abuse.

But I can no longer stay silent. I’m sharing my story because I hope that maybe I can reach someone in an abusive relationship right now and show them a better way. Maybe I can make someone else feel validated that they’re not alone in their pain. Maybe I can spark a conversation about domestic abuse in our global community. Maybe I just need someone to listen.

In the moment I finished reading the article about toxic parents, I was still sitting in my cubicle, reeling. A wave of memories and red flags crashed over me, and in an instant, I felt both unsettled and vindicated. Now I knew the way I was treated was abusive, and I can say for sure that I wasn’t just overreacting, as I was made to believe.

I had to read more. I alternated between my work when my PC was running smoothly, and switched to reading about abuse when it wasn’t. That day was the first time I saw the phrase “toxic narcissism.”

While toxic narcissism itself doesn’t seem to be a widely accepted medical term, it helped me understand myself and my abuser in a way I didn’t before.

Narcissists often (but not always) have inflated egos, lack empathy, feed off admiration, and never accept blame for their faults. They put others down to compensate for lacking self esteem. In short, imagine Donald Trump.

Grappling with this new information became a new source of stress. Flashes of anger hit me in quiet moments: driving to work, doing dishes, going to sleep. Memories came into focus in a new light, like, “Oh, so that’s why I briefly developed a stutter in high school and sometimes felt uncomfortable around older men.” I began to second guess all of my life choices: Did I make those decisions on my own, or was I bullied and manipulated into them?

Between bouts of anger and the persistent feeling that my agency was stolen from me, I realized I needed help. Not only did I need it, but my wife and daughter needed me to get it as well.

My daughter wasn’t even two. She couldn’t tell me I needed help. She shouldn’t have to. Even if I can recognize abusive behaviors in others, that doesn’t mean I won’t repeat the cycle.

So I started counseling last year. Before I jump into that, I’m going to point out that access to mental health care services is privilege here in America, and it shouldn’t have to be that way. I’m lucky to have health insurance, but even with my current plan, I’m paying $50 per visit once a month. If I didn’t have health insurance, it would be $75 a visit. I know a lot of us don’t have the means to seek professional counseling, and that fucking sucks. But if you think you can afford it, just go. You’re worth it, and you deserve good health and a path to happiness.

Some months passed before I built up the courage to go, and I’m so glad I did.

(After a few visits, I discovered my counselor was into the ‘90s Gainesville punk rock scene. Having lived there myself for a stretch during the 2000s, we bonded over being fans of Radon and Spoke, and she rattled off a bunch other Gainesville bands I didn’t know. Later, I ran into her at a Descendents show. Super cool!)

What surprised me about counseling was that the experience wasn’t just about talking—which was cathartic to do—but also learning new skills.

During our chats, my counselor identified other ways my abuser acted without me listing them all myself. I was struck by my counselor pointing out that I was never allowed to argue back, because narcissists can’t handle being challenged. As a survival mechanism, I quickly learned that surviving meant shutting up and never speaking up for myself.

Over the next several visits, we set up a game plan for me to learn new skill sets. Starting simple, I practiced saying at least one positive thing a day. I learned how practicing breathing can help me remain calm during conflicts and through stress. I learned how to communicate ideas without being a jerk about it. I learned that working to understand my painful memories would help me resolve my heartache better than burying those memories.

Most importantly, I learned about setting boundaries and sticking to them. We get to choose whom we want in our lives. For some of us, having no contact with our abusers is the boundary that we need to set, and that’s fine, because it’s what we need to do to survive. We have the right to make that choice.

I’m choosing to continue having a relationship with my abuser. He’s my dad. Just because he raised me doesn’t give him special privilege to be part of my life now. I’ve laid down one rule with him: don’t verbally abuse me. The last time he broke that rule, we didn’t talk for three months. If he wants to be part of my life, he can. He just needs to respect that boundary.

You can get help a few different ways in the United States. The National Domestic Abuse Hotline exists to support people in abusive relationships, and they can be reached at 1−800−799−7233, at 1−800−787−3224 or at https://www.thehotline.org. You can also try VictimConnect by phone at 1-800-4-VICTIM or through online chat at https://victimconnect.org. They’re a 501(c)3, and they’ll help you understand your rights and refer you to resources where you can get help.

If you’re looking for a social media community where you can just chat and unload, I recently discovered that Reddit has a slew of support groups. The first one I stumbled upon was http://www.reddit.com/r/raisedbynarcissists, which has top notch moderators who are aggressive about weeding out trolls and unsupportive comments, and their sidebar is absolutely loaded with helpful resources.

I also recently signed up for a catchall subreddit http://www.reddit.com/r/survivorsofabuse. It’s a smaller community, but members always seem to be helpful and encouraging.

Regardless of how you choose to get help, or if you decide not to get help at all, I want you to know that you’re not alone in your pain. I know it’s hard to talk about, but you deserve to be treated well, and talking about abuse is a great way to start healing.