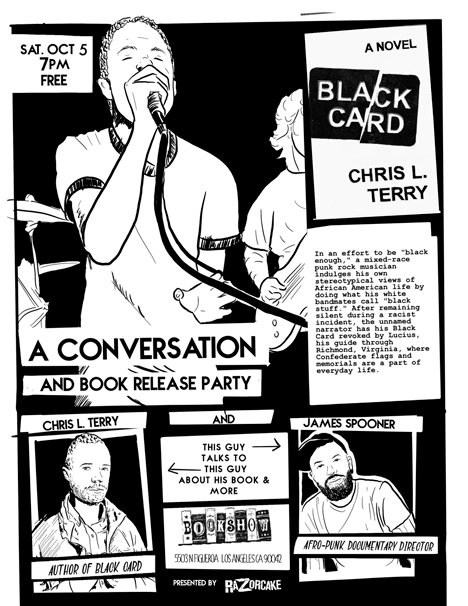 Razorcake is proud to host two Razorcake contributors in celebration of the release of Chris L. Terry’s novel Black Card at Book Show on Sat., Oct. 5 at 7PM in our home of Highland Park for a reading, book signing, and conversation with AfroPunk filmmaker James Spooner.

Set in the sweaty house shows and musty cafes of the early ‘00s, Black Card is an uncompromising examination of American identity. In an effort to be “black enough,” a mixed-race punk rock musician indulges his own stereotypical views of African American life by doing what his white bandmates call “black stuff.” After remaining silent during a racist incident, the unnamed narrator has his Black Card revoked by Lucius, his guide through Richmond, Va., where Confederate flags and memorials are a part of everyday life.

“At its core, Black Card is about race in this country and its unwritten rulebook we are all pressured to conform to. This is the story of one punk’s struggle to create himself in a world that seems hell-bent on drawing its own conclusions.... Definitely recommended.” –Rene Navarro, Razorcake

Chris L. Terry was born in 1979 to an African American father and an Irish American mother. He has an MA in English from Virginia Commonwealth University and a creative writing MFA from Columbia College Chicago. Terry’s debut novel, Zero Fade, was named a Best Book of the Year by Slate and Kirkus Reviews. He is the author of One Punk’s Guide to Rap Music. Terry lives in Los Angeles with his family.

James Spooner is an accomplished tattoo artist, illustrator, Razorcake “No Fun” columnist, and filmmaker who directed the seminal documentary AfroPunk and the film White Lies, Black Sheep. He is now working on an autobiographical graphic novel.

If you don’t think you can make it, you really should buy Black Card directly from the publisher.

To get more of a feel of Black Card, check out this podcast interview with Chris.

Here’s the FB link for the event