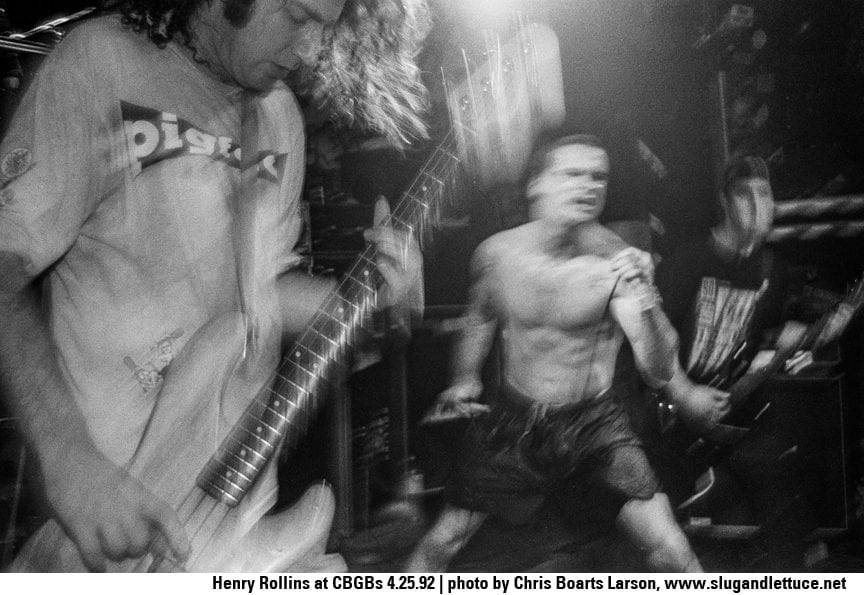 One of my most regrettable life stories was not being able to see Black Flag in 1986 when they came to my home town in Pennsylvania because I was contagious with mono. I begged and pleaded with my parents. I remember even saying I would stand outside on the patio with a bag over my head. It was one of the few times they had to say no. A few years later in 1990 and again in 1992, I got to see Rollins Band at CBGBs in New York City. It wasn’t the same, and I really wasn’t an über fan, but it was still pretty cool.

Twenty five years later, Henry is back in my orbit. My mom is a stagehand and has been working in the theater my whole life. For the past decade she has been the stage manager of a local state college theater. Last year, she called me up to tell me she had Henry Rollins in the theater and she thought I might know him. Ha! “Yes, of course,” I told her and recounted my woeful tale of missing Black Flag and suggested she talk to him and get a photo.

Telling this story at work, we ended up listening to an old episode of Love Line that had Henry has a guest. It was so entertaining we started to dig up various podcast interviews with Henry. He is a hell of a storyteller and I have really enjoyed his obsessive tales and his amazing memory for details. Ultimately, we found his weekly radio show on KCRW that we listen to online regularly. He’s an interesting dude. I have enjoyed listening to him all these many hours at work while he talks about his passion for music, vinyl, fanatical life tidbits, and stories of ancient punk histories.

What a coincidence. I wrote this antidote, submitted my Henry Rollins photo column, and my mom popped up in my Facebook feed as a memory from one year ago today.