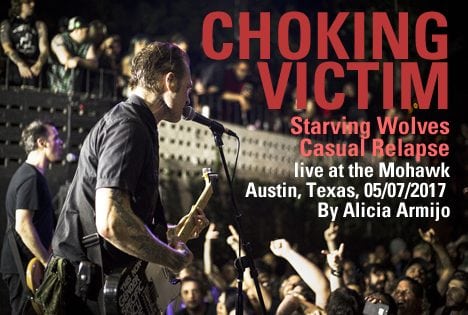 After a long hiatus, late last year Choking Victim reunited for what they said would be their final tour together. To my and many other fans’ happy surprise, they announced that they would be reuniting again this spring for their aptly titled “Zero Fucks Tour” through the Southwest, the Midwest, and a few choice international locations.

I caught these ska-punk rockers for their third and “last” Texas performance at the Mohawk: a venue that has become vital to Austin, Texas’s identity and vibrant music scene. Located in the heart of the Red River Culture District, the Mohawk is one of Austin’s only venues that is dedicated to showcasing punk rock and alternative music. This district holds many of Austin’s historic and biggest concert venues, including Stubb’s BBQ, Beerland, the Mohawk, Cheer Up Charlie’s, and many more. Due to recent rent increases and strict noise ordinances, all of the venues on this strip are facing the real possibility of moving or closing entirely. While the future of the Red River Culture District remains uncertain, it was undeniable that the Austin music scene was thriving this past Sunday night as music-lovers, local and from across the state, packed the Mohawk to enjoy these talented musicians.

When I arrived at the venue for this early evening show, it was pleasing to see the growing line of excited punks, all dressed to the nines for the occasion, lining the full length of the venue’s wall before doors opened for the show. To me, there’s nothing I love more than being surrounded by these fiery people who share my passion for all of this.

With whiskey in hand, a friend joined me as we made our way to the front of the main, outdoor stage for the opener of the night. Casual Relapse, a young punk outfit from Dallas, Texas, kicked off the show with what was perhaps the liveliest circle pit of zealous fans that have ever seen for an opener. To be sure, with each song, the pit grew from one provocateur circling alone to a progressively more violent group of radicals, which ultimately led to a few being ushered from the venue. Even so, the band—who had just learned that they were playing the show that morning—were the perfect pick to stir a keen audience for the night ahead.

Following that, Starving Wolves—a local Austin punk band—stormed the stage and put on an absolutely brutal performance. At times it seemed as though the Mohawk’s outdoor stage may not have been meant for a band so energetic. But, that didn’t stop their front man David Rodriquez from using all aspects of the venue to enthrall and invigorate the crowd. Early in the show, Rodriquez jumped down into the pit to scream his lungs out with fans who sang along to every word. Towards the end of the set, he took the audience by surprise when he scaled the railings to the balcony. From above the crowd, he voiced his support for the bold protesters of the Dakota Access Pipeline, encouraged an ever more violent mosh pit, and continued to build anticipation with the help of his bandmates for the main act to come.

For the final, shining performance of the night, the current lineup of Choking Victim—Scott Sturgeon (a.k.a. Stza Crack), Alec Baillie, and Skwert—rather reticently came out onto the stage to greet their screaming fans. This puzzling first impression of the trio certainly did not last long as they quickly broke into a ruthless performance of “500 Channels.” The band exhilarated the audience as they played their staggering and only full-length album, No Gods, No Managers, in its entirety along with many hits from their two EPs, Crack Rock Steady and Squatta’s Paradise.

Throughout their unfailingly brilliant performance, Stza took opportunities to acknowledge each of his awesome bandmates and fellow performers. He made amusingly awkward banter with Alec on bass about what’s going on in his life as he tuned up for the songs to come. During their eight-song extended encore, Stza also invited members from Starving Wolves out onto the stage to scream along to one of their final songs of the night. Kevin Nguyen and April Schupmann sang and skanked along with Choking Victim on the jam-packed stage as they dodged stage divers and eventually jumped into the pit to join them.

Before closing out the show with a play of their self-titled song, “Choking Victim,” Stza comically asked the crowd what other songs they wanted to hear that they hadn’t played. He quickly urged that they would not be playing any Leftöver Crack songs that night, but that seemed almost preferable to the fans in attendance. After all, Choking Victim has its own distinctive flavor that’s worth wholly experiencing in its own right. This fan is certainly glad that she could catch them for this incredible performance. Here’s hoping the band will boldly reunite for yet another last, extraordinary tour in the future.

Alicia Armijo is a photojournalist based in Austin, Texas and Los Angeles, Calif. Her photography can be found at aliciaarmijo.com. She can be reached at [email protected] or on Instagram: @alicia.m.armijo.