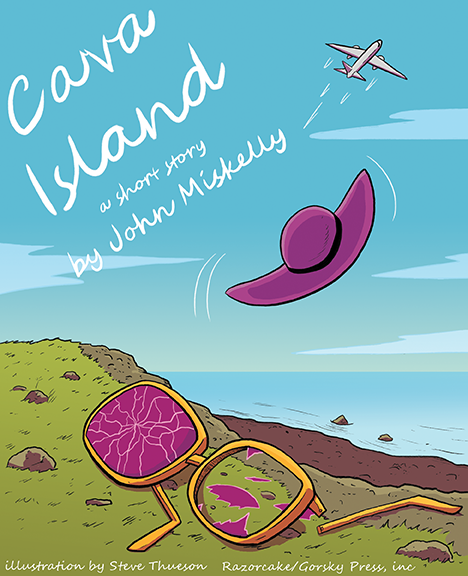 The plane lurched as it passed through a patch of light turbulence. Several young voices whooped, others shrieked in affected, pantomime fright.

A girl of university age in a hat with a brim larger than an SUV hubcap and cat eye sunglasses talked languidly into a phone. “So, basically, my agent’s really into the old money thing, like Instagraming all over Dad’s house—the stables, on the pianos, and around the pool. That paid for the apartment in London and I left university. Then I started getting sent the clothes and going to all these lush places in Europe, just with a three post minimum to keep the brands happy, you know, ‘In Monaco hashtag Gucci hashtag blessed.’ Last year, my brand sent me to Cannes and Coachella. So yeah, it’s all pretty overwhelming,” she said, underwhelmingly.

“Are you talking to me or doing a Facetime interview?” said the confused looking ginger haired teenage boy in a large baseball cap that said “Future Pimp” on it, sitting in the seat next to her.

“Reading back an email interview I gave the Washington Post Sunday magazine.” She took a selfie, apropos of nothing. “So what do you do?”

“I play Warhammer and post the games on Twitch.”

“I don’t know what that is,” she said. Even with his age and his autism it was obvious to the boy this wasn’t a question. “Do you like my hat?” he settled on. “My agent bought it for me.” The girl deigned to flick her eyes away from her screen to glance at his hat. “It’s nice. I’d take a selfie with you but, you know, hashtag lifestyle, etcetera. There’s just no cross brand potench there.”

“I get it,” Future Pimp said. “Are you looking forward to Cava Fest?”

“Can’t wait, babe. If I get a photo with all of Maroon Five, I get a Mercedes.”

The plane trundled on. A flight attendant made a second pass through the cabin with a tray of champagne flutes, some filled with Cava, others with a medicinally coloured energy drink.

Two seats in front, a girl dressed in a sparkling gold Nirvana vest top scowled into her phone and asked aloud, “Is it lame to post two OOTDs in one day?”

A disembodied voice from somewhere up front replied, “My brand says I gotta post at least three OOTDs a day or I get nothing, not even a guest list at a shitty London club night. I missed the Golden Globes, ’cause I forgot to Insta myself drinking a protein shake some brand sent me.”

The man of unidentifiable age wearing a baseball cap and a hoodie with a hashtag motif plonked himself down beside Sparkly Nirvana girl. “Let’s do some cross-branding,” he said, then grabbed her round the shoulders, grinned and held up his phone in front of them. She arranged her face from a scowl to an unassuming, gregarious smile just in time for the camera flash.

“Hashtag… Cava Fest,” he said, his tongue poking slightly out of his mouth as he typed, “Hashtag blessed, hashtag lifestyle, at…” he gave her a sideways look. “What’s your Insta name again?”

The girl gave a roll of her eyes and mumbled a handle.

Backward Baseball Cap typed, read, and smirked. “So you put on makeup?” he said. “Is that it?”

“And nail polish. And they’re tutorials. My agent says eighty percent of females between fourteen and eighteen recognise my face, sixty percent if I’m wearing sunglasses. Take a look at my views, it’s like…” But no one found out what they were like—she simply trailed off and made a hand gesture as if expecting an on-hand somebody to find the word for her.

An astonishingly pretty male youth wearing a suit jacket with nothing underneath but a thick gold necklace appeared at Backward Baseball Cap’s armrest. “Don’t you just play Fortnite and kinda shout things?” he said.

“Go on, then,” said the suit jacket boy man, in a Chelsea and Kensington drawl that dripped of money and hubris.

“Tell us one of your jokes.”

“Sounds a bit more like a clown,” said suit jacket boy, the twitch of an Eton smirk on his lips.

A voice from the front of the plane: “Three mentions? You’re working too hard, mate, have a word with your agent.”

Another voice: “It’s all about the Klout scores, though, right?”

A general hubbub of disapproval arose from the passengers.

A blonde bequiffed youth in a gold Ramones T-shirt with a USP of farting on the sites of historical importance faced his fellow passengers and raised his phone. As if the device were some remote control, a crop of hand gestures rose into the air and faces arranged themselves into smirks, pouts, gurns and other brand-approved/marketing team developed facial arrangements.

“Hashtag Cava Fest! Blessed!” the man shouted and sat down.

“Where is this island, anyway?” asked Fortnite guy.

“Cava must be where they make the champagne.”

“How you know so much ’bout booze when you can’t even drink it?”

“It’s in Spain!” someone Wikipedia’d.

“Speaking of which, shouldn’t we have seen some sun by now?”

The plane banked violently, inciting more excited shrieks that quickly turned to murmurs of confusion as the windows filled with a bird’s eye drapery of storm cloud grey jagged rocks, patched together with untamed shrubbery and grasses. The plane levelled out and stomachs jumped into throats as it began its descent.

“Why are we landing? We barely took off an hour ago?” asked Suit Jacket Sans Shirt, a touch of anxiety vibrato in his voice.

“This is sus as fuck, mate,” said Backward Baseball Cap, leaning over Sparkly Nirvana girl to better peer out the window.

The plane descended so steeply that several people squealed, in genuine fear this time. The aircraft barely cleared the black waves that thrashed and churned against the rocks. Finally the plane bumped and jolted across the uneven plain, the closest thing to a runway the island had.

The passengers emerged tentatively, placing their brand partner sneakers onto the wild grass like it was thin ice. A cold wind cut across the island and what little outer clothing they had they pulled around themselves. They scanned the empty horizon, brows furrowed and teeth chattering.

Suddenly, there was a new voice, older and well spoken, a middle-aged man in a suit and glasses, standing at the top of the boarding stairs. “None of those things are here. Sorry about that,” he said.

They all turned expectantly towards the man in the suit.

“And who might you be?” asked Jacket Sans Shirt.

“What’s a civil servant?” someone asked.

“I think it means he’s a politician or something.”

The civil servant looked as though he might correct this, then thought better of it. “Yes, more or less…. So, all attention spans considered, I’ll keep it brief: there is no festival. This is Cava Island—nothing to do with sparkling wine. It’s a conveniently named island off the coast of Scotland and it’s uninhabited and very small.” He stood for a moment with his hands clasped statesmanlike in front of him, then, seemingly not sure what the appropriate protocol might consist of, hesitantly turned around and stooped down to re-enter the plane.

“This has to be one of GlitchBoy94’s pranks,” said Future Pimp. “I was wondering why he wasn’t here. We’re probably all on Periscope right now.” He looked in vain into the middle distance left and right in search of a device on which he may have been being filmed.

“Is that it, then?” asked Sparkly Nirvana, “This was a trap? Have we been pranked or what?”

The man straightened up again. “I mean, we probably won’t use those words exactly.”

“Okay, nice job,” said Jacket Sans Shirt. “We’ve all been owned. Can we get back on the plane now?”

The civil servant gave a chuckle. “No. No, no, no—you’ve misunderstood. You’re staying here.”

A rising murmur of indignation and confusion rippled through the group.

“For how long?” asked History Farter.

“That’s…” the Civil Servant chose his words carefully. “… until we know what the hell’s going on with you lot. It’s an extreme policy—we could’ve just put you in a Wifi-free camp, but there are certain connotations with that and this type of theatre plays well in the tabloids.”

“And what is going on?” said Future Pimp.

“We don’t know. But we know something is and you lot might have something to do with it.”

“We are the kids,” cried Rich Dad girl.

“You have your own stables,” said the Civil Servant.

“Your agents are currently somewhere in an undisclosed location in the Australian outback.”

“That’s so typical of Ian to be taking another holiday,” someone said.

Now the ripple of confusion turned to an angry tumult, complete with profanities and oaths as the group checked their phones.

“I’d like to speak to my father please,” said Rich Dad Girl.

“Actually, your father bought this plane.”

She looked around to see a familiar logo on the fuselage. “Oh yeah,” she said, and took a photo.

“Right, bye, then,” said the Civil Servant, and hastily ducked into the plane and shut the door.

As the plane restarted its engine and began its wide turning circle, the group stood dumbstruck and bovine like. The few for whom the reality of the situation had clicked began to hopelessly chase the plane as it rattled and bounced along the uneven grass plain. But even those with gym brand partners hadn’t a chance. Rich Dad Girl, vainly attempting to run in thick wedge heels, was the last to give up the chase, falling to the ground even after the plane had lifted off and was tens of feet into the air. As she fell, her sunglasses slipped off her head and smashed on an errant rock, and her floppy-brimmed hat cartwheeled drunkenly away with the wind, coming to rest in a bog.

Cava Island is a real place. It’s very small and makes up part of the Orkney archipelago off the coast of Scotland. John Miskelly is thirty-three and lives in Asturias, Northern Spain.