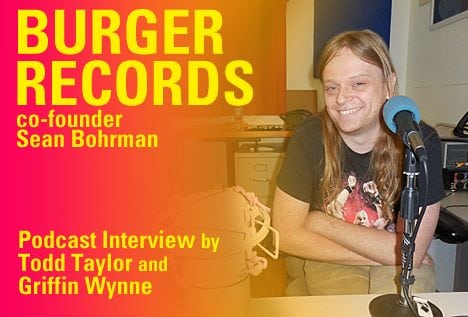 “We all have our own agendas,” my good friend Jim Ruland told me when I was expressing some doubts about this interview.

I was conflicted with doing an interview with Sean Bohrman, co-founder of Burger Records. Burger Records makes decisions I wouldn’t. As is my habit, I did a lot of research on both Burger and Sean. To be honest, the more research I conducted, the less I wanted to do the interview. (Upon review, part of my harrumphing is that the interviews were primarily from outsiders and academics removed from actual production and the present-tense underground, which is not Sean’s fault.)

I was on a mental see-saw.

On the good:
The Resonars, the fantastic one-man band of Matt Rendon (formerly of the Knockout Pills) was the very first piece of vinyl that Burger released (a technicality covered in the interview). Burger also released Peach Kelli Pop, who I really like, and Allie said that Burger treated her very fairly.

When I asked for a press pass to the most recent Burger Boogaloo, Sean got right back to me, was very accommodating, and I got to see the Mummies perform the best entrance of a punk band I’d ever seen. King Khan And The Shrines were on point. My longtime buddies Kid Kevin and Raul of CaliMucho were also at the Boogaloo, screen printing the merchandise for the event. Burger gave thanks to their roots.

I am also a genuine fan of Thee Makeout Party, a band that was composed of both Burger founders Sean and Lee, over ten years ago.

It’s obvious to me that Sean and Lee both work their asses off and have created something much more far-reaching than themselves.

On the bad:
Due to growing up in Nevada in the ‘80s, I fucking hate cassette tapes. They betrayed me. I’ve lost hundreds upon hundreds of albums because the tapes broke or became so heat-warped to be unlistenable. Burger is largely responsible for the cassette revival.

Burger openly works with corporate sponsors with their festivals. This is hard for me to take, coming from the point of view as a person who helped run a festival for five years. I also think that VIP sections are classist and shitty. No ins-and-outs for a full-day festival sucks, too. I believe these are controllable aspects if your name is at the top of the poster.

Burger openly works with major label bands and corporate musicians. This bums me out.

In all the research I conducted, Burger was firmly apolitical. That sucks. (This has since changed. The Bernie Sanders campaign reached out to Burger and they lent their voice.)

Sean showed up on time and had a nice chat with Griffin Wynne and me. Before we started recording, we talked about professional wrestling and that my first email to him about this interview warned him that I’d ask some hard questions. We cover all of my above concerns in this interview.

I appreciated and respected his candor. Thanks, Sean.

Introduction and photo by Todd Taylor