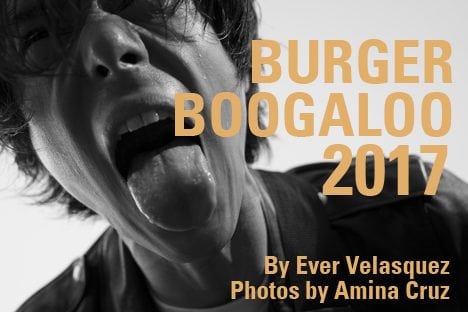 Burger Boogaloo 2017 by Ever aka The Girl About Town, Short Film by Alxis Ratkevich

Burger Boogaloo kicked off summer at Mosswood Park in warm and inviting Oakland. The weather was divinely warm with a cool breeze. We expected it to be way too hot, but were pleasantly surprised by the weather as well as the amenities at this year’s event. A variety of age groups and walks of life covered the park. It was best put by the filthiest host alive, John Waters himself, who cleverly talked about that it would be more outrageous to have no tattoos or to dress like a cop to look original in the sea of people.

Guitar Wolf gave the audience more than their money’s worth on day one. It’s hard to believe there were so many people there who witnessed Guitar Wolf for the first time; it kind of made me wish I was in their shoes, seeing that rock’n’roll mayhem from Nagasaki , Japan. Playing covers by Eddie Cochran and Vince Taylor alongside their hits like “Wolf Rock,” “Jet Generation,” and “Fujiyama Attack.” Even with the passing of Billy—better known as Bass Wolf—Seiji (Guitar Wolf) and Toru (Drum Wolf) continue to play as if Bass Wolf was still there in spirit. Seiji stage dived into the sea of new fans only to pull himself up on stage with a member of the audience. They then battled guitar riffs well into the evening with Toru and U.G. (Billy’s replacement) in tow.

Guitar Wolf was the perfect choice to get the crowd ready for the one and only Iggy Pop. The sun set like the earth knew we would have to brace ourselves for the force which is the godfather of punk himself, Iggy Pop. He jumped right into “I Wanna Be Your Dog,” flailing his rubber band-like physique, reminding us of concert footage from 1969. When it comes to live performances, Iggy never disappoints. He had us all in a mix of tears and yelling our hearts out to jams like “Repo Man,” “TV Eye,” “No Fun,” “Lust for Life,” and ending his set with “Real Wild Child.” Day one was a one for the books and had me eager for day two.

Sunday jumped off to slightly cooler weather. We got there as Los Angeles cuties La Luz were getting ready to hit the Gone Shrimpin Stage—described best by John Waters as the female’s equivalent to have a dick and getting it sucked. La Luz brought their surf style to the festival with songs like “You Disappear,” “I Can’t Speak,” “Damp Face,” and “Call me in the Day,” while they moved the crowd to dance throughout their set.

We checked out the vendors and food options while we waited for Shannon And The Clams. It was in the air that Shannon would soon start her set. People were waiting in anticipation thirty minutes before they were due to setup. Shannon And The Clams were shocked to see the amount of fans ready for their set. The crowd erupted in dancing, slam dancing, and stages dives while hits like “You Let Me Rust,” “Sleep Talk,” “Runaway,” and “Gone by the Dawn” resonated the park. A sea of fans and thirsty-ass girls tried to make the set about them. I was very pleased I found my shoe that I lost in-between the songs “Heads or Tails” and “Point of Being Right.” Shannon announced that she would catch everyone at Butt City where Los Angeles’s own X would be hitting the stage.

I feel we caught X on a bad day because it wasn’t what I was used to hearing or seeing live from them; so much so that it made us leave shortly after.