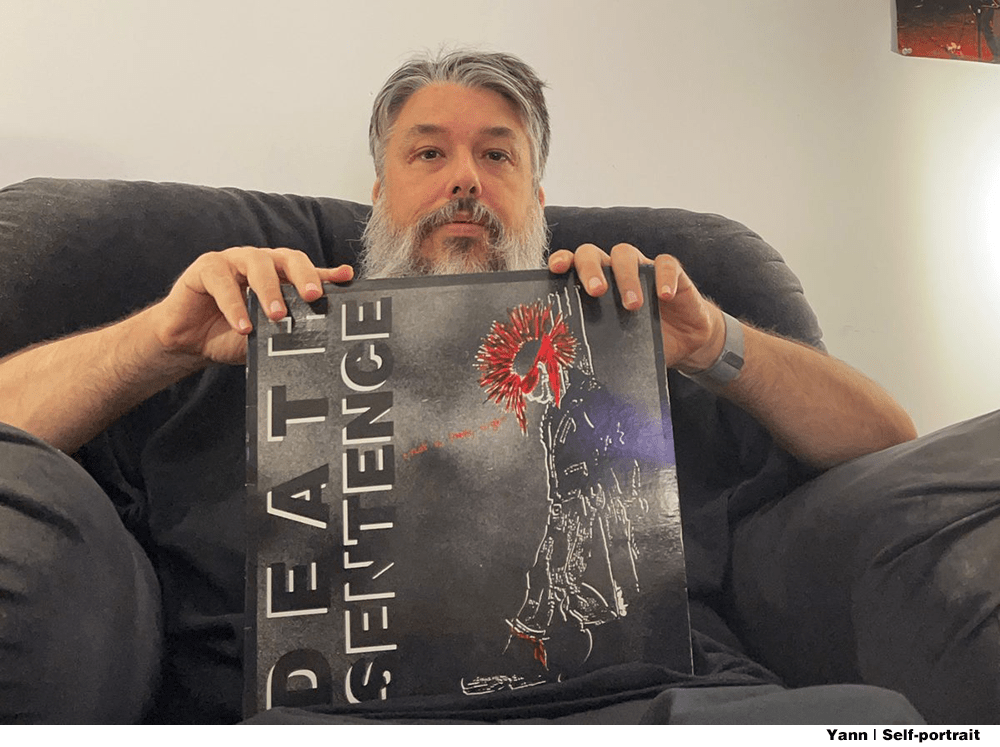 Being True to My Punk Beliefs by Yann Bourdeau

I often ask myself the question: “Am I still punk?” Sure, I don’t live like a squeegee punk. (I think the term squeegee punk is a Montréal thing. A squeegee punk is a punk who washes car windshields at a busy road’s intersection for money.) I got a great job that pays me well. I have an apartment which is kinda cheap for the money I make. I can afford some electronic gadgets. I’ve got a great record collection. Life is good. However, all these things do not make me punk.

The first thing I learned from punk is to question authority. I need to understand why I’ve been asked to do something. It is important to me to understand the purpose of my actions.

Over time, it became “Question yourself over authority.” I like to think if I’m doing something, it’s worth it. Is it keeping with my values? I’m worried about climate change. What kind of planet we are leaving to our children? I think a lot about my nephew and what kind of life he will have in his fifties. He’s fifteen now. My worries of climate change make me not to want to buy another car when mine gets too old. I’ll take public transport to move around Montréal. I’m planning to buy a bike next summer to do short distances. I have two motives for this: 1. Do some exercise. 2. Pollute less. For the pollution argument, I have found the following arguments that most trips are short and do not need a car. Did you know that more than half of all daily trips in the U.S. were less than three miles in 2021 and just two percent of all trips were greater than fifty miles? (Here are some motorized vehicle trip statistics from the U.S.) I was not able to find the Canadian equivalent, but I found the average commuter distance in all of Canada was 11.9 km (under 7.5 miles).

One thing that is hard to change: to keep all my electronic gadgets for seven years. I read somewhere to offset the cost of pollution created by making these gadgets, they need to be used for seven years. I will try to keep them as long as it’s possible. The feeling of always needing the latest and greatest must cease. I’ve been guilty of this in the past. I thought I needed something very much and it would make my life easier, only to realize the wow factor was gone five minutes after owning the new gadget. I think the feeling of happiness when you treat yourself to a new thing is very short. You realize that it has better functionality than before but you don’t need it as much as you thought. Also, these features could be backported (unless it’s a hardware feature) to older gadgets but the companies that don’t try to sell as much as they can.

When you buy a high-end, well-made gadget, it will last longer than the cheap one. Planned obsolescence happens a lot on the cheaper device because the companies do not make as much money as their flagship. Most people are not able to put the amount needed to buy the flagship and instead buy the cheapest offerings. This makes the people who cannot afford the flagships buy more of the same gadget (which lasts a shorter time) and pay more in the long run than buying the flagship (which lasts longer).  Here’s an article that goes into detail in planned obsolescence. I found an article (In French. Sorry from France.) on how much and how long you need to use an ebook reader to offset the cost of pollution of its creation. The average user replaces them after two years. A user of an ebook reader needs to read at least ten books a year and keep the device for six years to pollute less than buying paper books.

I prefer working for a company which values their employees and share some of my values. I work for a company that I have chosen for its value. It produces green electricity, which fits nicely with my beliefs about climate change. I’m in a situation where I can live on my terms and chose with whom I do business.

In order to be a punk, does one need to be in a constant struggle to live?

About twenty years ago, a friend told me I was kind of bourgeois the way I was living. I must agree this is true. I did not take it as an insult. In order to be a punk, does one need to be in a constant struggle to live? She didn’t understand how I could spend fifty dollars on the Death Sentence’s Not a Pretty Sight record new, sealed—not that I’m into paying a high price for a record. I did go over my principle of not paying too much for a record because it was one of the first records I bought when I was fifteen. I sold all my vinyl records in 1992 to make some money, but I kept my CDs. For nostalgia reasons and to bring back memories from my youth, I wanted another vinyl copy of this record. Back in those days, my friends and I very liked this record. I don’t think it’s anything special nowadays but it brings back a lot of memories when I listen to it. (Your few first records always feel special.)

Back in those days, I had a great apartment. I welcomed in people from all walks of life. One of my best friends was on welfare. We had a great many evenings listening to punk music and drinking beer. I have discovered that some people who need help are stubborn and do not accept it easily because they are too proud. However in case of my friends’ needs, I was always there to help.

I was on welfare once in my life for two months. It was when I’d just finished university in December 2005. I put myself on welfare to search for a job in January and February 2006 (not the greatest months to apply for jobs in IT). My father offered to pay for my medications, but I was too proud to accept. Here in Québec we’ve had public drug insurance for the past twenty-five years or so. (You can read on drugs plan of each province here.) If you have private insurance, you’re on it; otherwise you’re on the public one. It’s mandatory to be insured one way or the other. The full price of my medication is around five hundred dollars per month. If I had to pay the full price of the medication, it will have taken almost all the money from the monthly welfare check. With coverage, it was a lot more manageable, around seventy dollars per month.

The older I get, the less I care what people may think, even fellow punks. I do what I want by just being myself. I don’t try to impress anyone. There’s some comfort about not caring about the image I’m projecting. I just keep true to my values and do stuff I like to do.

Is being punk about being true to your belief? I hope so.

On a side note, at the time of writing this, I’ve been asked to consider becoming vegan after my latest column about my weight loss. In the same vein as questioning myself about what I do, I’ve been thinking a lot about this. There are ethical reasons (animal wellbeing) and ecological reasons (pollution by intensive breeding) to not eat animal products. This questioning myself, I think, is truly punk. Is being punk about being true to your belief? I hope so. I’ve been questioning myself about becoming a vegan and I’ll try. I’ll buy a vegan cookbook and start gradually.

I’m trying to reduce my carbon footprint and I like to be challenged about it. I really like the clash of ideas from different people. I find it dull when everybody is on the same page. I really like to hear about diverse opinions. On Twitter, I follow some conservative people to be aware of what they think—not to laugh about their ideas—even if I almost never agree with them.

Small changes I’ve implemented in my life will not fix the climate issue but at least I’ll have done my part. When I die, I’ll be guilt free about this. I make those changes because I’m questioning myself about what I’m doing.

I think being punk is about to being free. Do what you want and not care about what people think. I’ve lived with this principle all my life. So, in the end, do I consider myself still a punk? Yes, of course. I may not have spiked hairs with a leather coat like when I was a teenager but I truly live my life by my values.