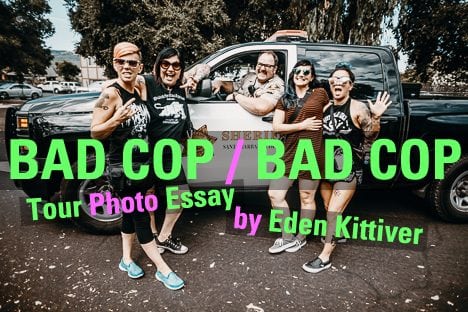 In the summer of 2017, I had the opportunity to tour the country on Warped Tour with the Fat Wreck Chords four piece, Bad Cop / Bad Cop. I’ve been photographing punk bands for about four years and have a passion for working with influential, feminist bands; so, this really was the perfect opportunity for me!

I had only met the girls in Bad Cop / Bad Cop a couple times before joining them on the road. After shooting their set at a local show in February, Stacey Dee (guitar and vocals) called me about using the photos on the back of their upcoming album, Warriors. Shortly after that conversation, I was invited to document their seven-week festival tour through America.

As much as I wanted to steer away from commercial, money-hungry punks, Warped Tour is an opportunity that’s hard to turn down. I graciously accepted, and I’m so glad I did! I had the time of my life travelling with Bad Cop / Bad Cop and it was an honor to be a part of such a hardworking group of individuals.

The following photos encapsulate some of my favorite memories from this summer.

When we arrived in Seattle on Thursday morning to check into the festival and receive our laminates. Jennie told us a story from when she was in elementary school playing “backwards people.” She and her friend put their jackets on backwards and were laughing so much they both missed the bus to go home. Naturally, this story inspired us to all be backwards people and record a video for Instagram, but it took so much longer than expected because we couldn’t stop laughing! Moral of the story: backwards hoodies are hilarious no matter how old you are.

In this photo: Jennie and Stacey laugh while wearing their hoodies backwards in the rain.

After only two show days on the tour, we had three days to drive from Oregon to New Mexico. All that driving was making us a little stir crazy, so we pulled off at a rest stop where Linh showed off her most impressive gymnastic tricks (to which I followed with a measly cartwheel). On our way back to the bus, we found this adorable white picket fence, and the girls posed pretending it was their own backyard.

In this photo: The members of Bad Cop/ Bad Cop strike a pose behind a rose garden and white picket fence at a rest stop in Oregon.

On our third consecutive day off, we spent some time in Moab, Utah for laundry and brunch. Then we got to drive through and explore Arches National Park! We didn’t have much time for hikes that day, and it was so hot we wouldn’t have wanted to, but the views were absolutely breathtaking. Although it was inopportune due to the busy schedule on Warped Tour, we did our best to see as many sights as possible while on the road!

In this photo: The band and crew stop for a photo in front of the beautiful scenery in Arches National Park.

One of my favorite days of the tour was in Las Vegas because even though it was one of the hottest days, Bad Cop’s stage was set up in front of the pool at the Hard Rock Hotel! The girls got in the pool as soon as they got the chance in the morning, and stayed in there for most of the day. Here’s Stacey about to hop in the water before doors opened that morning.

In this photo: Stacey strives to be the first one in the pool at The Hard Rock Cafe.

After a long, humid day in Maryland, everyone on the tour was invited to enjoy the backstage pool at Merriweather Post Pavilion! There was a huge party going on all night, complete with neon pool lights and karaoke! Out of everyone who sang that night, Linh’s performance covering “Ace of Spades” stole the show.

July 17 was the day of the AP Music Awards in Cleveland, Ohio, but there was a venue change last minute and getting into the awards ceremony became almost impossible. While other bands did their best to get passes last minute, we chose to spend the day at The Rock and Roll Hall of Fame and make an appearance at the after party that night. Here is a photo of all four girls with Mike Cambra, drummer for the Adolescents, enjoying the sunset over Lake Erie before the party.

In this photo: Bad Cop/ Bad Cop and Mike of The Adolescents watch the sunset over Lake Erie, after a day of exploring the Rock and Roll Hall of Fame in Cleveland, Ohio.

The girls have been asked to sign some pretty weird stuff on this tour. Everything from shoes to shirts to body parts to this plastic, headless doll that Jennie decided to pose with as if it were her body. Everyone in this band is hilarious and constantly doing something to catch me off guard. There are really no “serious” photos of them!

In this photo: Jennie gets weird with a fan's headless doll after being asked to autograph it.

One of the greatest things I’ve experienced on this tour was seeing the band interact with young kids who idolize them. These two little punks were hanging out at the side stage all day with their dad, watching bands like Bad Cop/ Bad Cop, Valient Thorr and Suicide Machines. I even saw the little boy singing along to “Die for Your Government” by Anti-Flag! That’s punk parenting done right!

In this photo: Linh strikes a pose with a couple of young punks before their set in Auburn Hills, Mich.

Four Bad Cops and One Cool Cop. We drove up the coast to Mountain View for the final stretch of the tour and stopped in Solvang for Dutch pancakes and chintzy souvenirs. After parking the bus in a nearby parking lot, a police officer pulled in and rolled down his window, to which we assumed he would tell us we couldn’t park there. To our surprise, he was simply curious what the band was called and expressed his interest in punk rock. He talked to Stacey for about ten minutes and they discovered they had a lot of mutual friends! The girls gave him a copy of their newest CD, Warriors, and got a picture with him before we left for breakfast.

In this photo: The band stops for a photo with a member of the Santa Barbara police department, after realizing he had a lot in common with them.

Our last stop on the coast that night. We had a big family dinner in Paso Robles. On our way back to the bus, we saw a small concert in a park, with a live jazz band and people dancing. We stopped there for some time and decided to take a photo in a tiny house by the park. Devito (merch) told the kids currently occupying the house that there were a bunch of spiders, which got them to clear out and run away, so we were able to get in for a quick photo. This was the last group photo we took before Warped Tour was over, and I think it’s the best one we have.

This tour was exhausting for everyone involved, but we were traveling the country and doing what we love with the best group imaginable! This was the adventure of a lifetime, and at the end of the day, I am so grateful to have been crammed into a tiny house with these seven amazing humans.

In this photo: Bad Cop/ Bad Cop and crew squeeze into a tiny house in a park in Paso Robles.