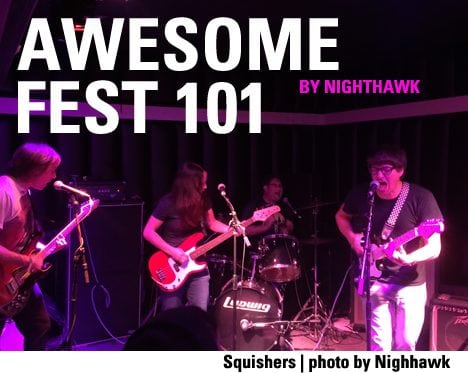 What’s that? You haven’t been to Awesome Fest in San Diego? Well, I have—four times—so I’m kind of like the substitute teacher equivalent on the matter. A 36% attendance rate isn’t bad for living about 2,000 miles away. Anyway, I hope you’ll feel like you’ve attended one of these after reading this column. That is my goal.

The festival starts on Friday night and goes through Sunday night. The first three years I went, it was always Labor Day Weekend. The eleventh one (this year), was moved to Presidents’ Day Weekend. There are two venues for the evening shows: Space and Soda Bar. They are on the same side of El Cajon Boulevard, separated by about two blocks. The afternoon shows are at two other venues, The Office and Bar Pink. Both are on 30th Street, located on opposite sides of the street, with University Avenue in between. It’s about a half hour walk from one area to the other.

Friday night, things got started off at Soda Bar for registration. Once I had my wristband, it was over to Space for Clown Sounds. From what I understand, it’s The Underground Railroad To Candyland, under a different name. Maybe not. The band has three drummers and plays songs that make you feel like bouncing around, while singing along. My opinion is, if Todd Congelliere (Recess Records) is involved, it’s gonna be great. I previously saw them in Florida at Pre-Fest and Fest last year.

The Trashies were next. I had only previously heard the name. They were some cool looking dudes from Seattle. The singer played a small keyboard, while the rest of the band played mid-tempo, yet sometimes upbeat, dance numbers. Then I walked back to Soda Bar for Muscle Dungeon. Because the men’s room was down to just one toilet, I was able to watch a handful of songs while I was in line to piss. The band was rockin’. These long hairs from Portland, Ore. played straight-ahead, four-on-the-floor rock’n’roll; just what I like. A Marked Men comparison would not be out of line here.

Kira Jari followed them. They were great. I knew a few of the guys from The Half Truths. These Texas boys sure know what they’re doing: in-your-face punk rock, but not too heavy. Nato Coles (Modern Machines, Used Kids, et cetera.) even joined them on stage to sing “Boys Are Back in Town.” What a treat! The band features three lead vocalists. Definitely check them out. DFMK was up next. They’re an AF regular from Tijuana. They straight rip. Fast hardcore with Spanish lyrics, the band is one of my favorites to see out there.

By this point, the beer and whiskey had caught up to me, and I headed back to the hotel on foot. Some leftover Jack in the Box proved to be a nice late night snack before bed.

I got to The Office on Saturday afternoon right about five. Shallow Cuts had just ended. Hanging out at the beach went just a little too long. I was able to see Evil Livin’ and Fleshies at Bar Pink, though. They were both awesome. EL is Rymodee (guitar, vocals, harmonica) and Teddy (drums, backing vocals) from This Bike Is A Pipe Bomb. It was great to hear them play some of that band’s songs. If you’re not familiar, it’s kind of twangy punk rock stripped down to the essentials with somewhat serious lyrical content at times. I highly recommend them.

Fleshies ruled. They’ve been doing their thing in Oakland since I graduated high school. I’m thirty-seven. Fleshies are the type of band that has your full attention once they start. The guitars have a great sound and the tempo ranges from moderate to slightly above. These older, dorky guys were all wearing safety glasses. I’m not sure what that was about. Regardless, the singer made his way from the stage (towards the back of the club) to the front door multiple times, all the while spending a lot of time lying on the floor. At other times, he was on the shoulders of a large man. It was all very uninhibited. Their set was one of my favorites from the weekend.

Canadian Rifle was the first band I saw that night. They were at Space. Middle of the road speed-wise, the band is slightly heavy punk rock with gruff vocals. They’re from Chicago, so of course they’re angry. After that, Soda Bar was the spot for the rest of the night. Squishers was first up. I had received an inside tip about them from the Fleshies singer. The band was comprised of Daniel from ADD/C, Marie from The Bananas, and the Evil Livin’ guys. They sounded similar to that combination of bands. Definitely a good set.

Dimber was next. The Los Angeles group played catchy songs that make you feel good and wanna dance. There’s nothing like feeling good. Snuggle! was to follow, but the drummer was a little out of sorts. While Davey Tiltwheel was helping someone get the drums together, the remaining three members of the band forged ahead. They didn’t sound that bad really, all in time with each other. These Seattle guys formed quite a few years back, so that’s not surprising. Having not seen them before, I couldn’t tell you what they should’ve sounded like. I found out the next day that the stand-in drummer was drunk, which explained quite a bit. It wasn’t that great. Their set ended a little early from what I could tell. The audience stuck it out though, singing along till the end.

The Globs were after them. Mike along with Marie of The Bananas are in the band. And a sax player! He also played keyboard! I liked them. The music made me feel like dancing and partying, and Mike’s unique vocals rounded out the sound nicely. Toys That Kill closed the show, and was great as always. If you don’t know them, introduce yourself. Todd C. strikes again!

On the Lord’s Day, I got to Bar Pink in time to see the end of Robot (Re)Pair. These Arizona characters did a pretty good job of playing pop punk. Matt Dobbins had blue hair, and they did a Pinhead Gunpowder cover. Not bad. Fuck You, Idiot was next. They were great. I see them fairly often in Chicago. I’ll describe their sound as (pop) punk with pretty killer guitar and hard-hitting drums.

Then it was The Plurals, a pretty rockin’ trio from Michigan. It’s one of the things Nick from City Mouse did before he joined City Mouse. Got it? After that, it was time to cross the street for The Chinchees. They’re great at that sloppy, low fidelity garage sound. Also, they look like The Monkees. Not really, but whatever.

A little Turkish Techno after that, just before Tiltwheel back at Bar Pink. TT always brings it. The bass player had a bum wheel, so he played the set in a chair. Everyone up front was singing along to the quick and catchy pop punk that these southern California dudes provided. Tiltwheel killed it. Davey and the boys never disappoint. When I watch them, I feel so good I could cry. Genuine happiness gets me choked up inside, and really good well-written punk songs definitely add to it. They are one of my favorite bands to watch.

The evening found me at Space, where The Chill Dawgs were scheduled. I play drums. It was our third time playing AF. For the second time, Davey was our lone guitar player because the other axe man didn’t make the trip out. Our set wasn’t too bad—party tunes with lyrics written from the perspective of a dog. We have two saxophones and a keyboard. Nato was supposed to play lead guitar on “Space Dawg,” but he didn’t show up. He did send a text message twenty minutes before our set, saying he couldn’t make it and that he was sorry. Oh well. A drunk woman did pass out at our merch booth later on. That was funny.

Hammerbombs were after us. They were really good. Pop punk singalong numbers that make flying halfway across the country totally worth it. After a couple complimentary cocktails, I headed over to Soda Bar for Adult Magic. I saw them last year at Fest. Good mid-tempo alternative (if you will) from Long Island. I saw a little bit of Dead Bars back at Space after that, before the night was over. Yet another Seattle band, they play a slowed-down version of catchy punk with words that are easy to sing along to.

If you haven’t gone to AF, go. If you have, go again. It really is a great weekend, and small enough to not be overwhelmed. There are more than enough bands for you to have a good time. If you haven’t been to San Diego, it’s a lovely city. The weather is great (even in February), it’s clean, the people are nice, and there’s an ocean with multiple beaches. It is expensive, but you know what? It’s California. Besides, you’re gonna spend money on any vacation. There are only a handful of people who organize Awesome Fest, which makes for a small, yet personal, experience. If nothing else, getting to hang out with Davey Tiltwheel makes going to Awesome Fest worth it. He is one of the greatest people I am thankful to say is a friend of mine. Marty Ploy ain’t a bad guy, either.