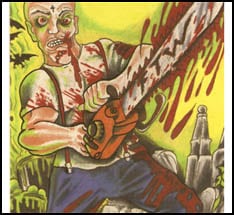 Sometimes, I get a little lazy. Sometimes, I just can’t bring myself to listening to that pile of CDs and records in the corner of my office. I feel bad, because I know how desperately they want to be reviewed. They’re all shiny and new and ready to show me what they got.

And I don’t give a crap.

Luckily, I know someone who does. An old friend of mine, Tarantula Ted, happened to be crashing on my couch when review time came around. He told me he always wanted to write music reviews, so I passed the task off to him. Here’s what he came up with:

Oh, wait. There’s something I need to tell you about Ted first: He’s a zombie. He got his name because his withered fingers are coated with black hair and look like tarantula legs. Dead guys tend to be kind of grumpy. Anyway, here are the reviews he gave me, which I had to type up because he refused to write on anything other than paper grocery bags.

Oh Jeezus. Listen, just because I’ve been dead for over ten years and my brain has rotted up into something that I imagine looks like a dusty raisin, that doesn’t mean I’m stupid enough to want to listen to cheesy high school pop punk bands. Damn. I think I saw these guys at the battle of the bands in high school back in 1994. Kids with wealthy parents who bought them instruments and studio time. They hung out at the mall. I threw an egg at them and they cried. –Tarantula Ted (translated by MP Johnson) (Flight Plan)

Now this is what I’m talking about. Some of my fellow corpses making the type of tunes I can really get into. They’ve got one called “Here Comes the Zombies.” It’s about going home after a long day of work and baking up a homemade pumpkin pie… filled with corpses! Well, at least that’s what I’m going to pretend it’s about. The lady carcass singing the tunes sounds a little bit too fresh. Her voice is all pretty and melodic. Most of my zombuddies tend to sound a bit more gruff, what with their rotten vocal cords and all. Oh well. –Tarantula Ted (translated by MP Johnson) (Wolverine)

My buddy Mac posed for the cover of this disc, and it’s quite a sight. He’s a chainsaw-wielding skinhead with a cross scarred into his forehead. This particular picture has him covered with blood, which is really his look. He and I have spent many a night wandering by the waterfront looking for romantic couples to chase around and mutilate. Ahhh, the good times. This thrashy nonsense is a decent soundtrack for those sorts of nights, but the dudes lose about a million originality points for opening with that tired sound bite from Dracula: “Listen to them… Children of the night. What music they make.” Ha. You’re tellin’ me, buddy. –Tarantula Ted (translated by MP Johnson) (Bridge 9)

This music sounds very similar to the noises my butt makes after it disposes of the masses of brain matter that my dead guts have failed to digest, except less rocking. They have a song called “Fall Out Boy.” I read through the lyrics of that tune twice and I still couldn’t wrap my rotting mind around them. Something tells me it’s not because their intelligence is beyond me. –Tarantula Ted (translated by MP Johnson) (Guevara)

I’m going to get serious for a moment, because, if there’s one thing I’ve learned in all my years of being alive or dead, it’s that there are few things more deserving of the serious treatment than a CD cover photo of a bunch of Plutonian Elves staring at me all serious like. According to legend, this band dropped an album a few decades ago, and then disappeared off the face of the earth. I’ve never heard that album, but I’ve heard this one, and it’s something else. Don’t expect all that woodsy Tolkien elf bullshit and don’t expect any cheesy laser blasts either. These guys refuse to let their space elfishness define them. They play brilliant power pop that is exemplary, regardless of their mythic heritage. Like all good rock, it transports the listener to another place. Just make sure it’s a round trip. –Tarantula Ted (translated by MP Johnson) (Alternative Tentacles) 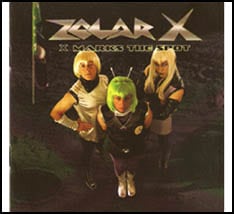 As a zombie, I essentially have one important decision to make on a daily basis: Whose brains am I going to eat? Sometimes, I put a great deal of thought into the decision. For example, one thing that would make me want to eat your brains is if you have a really great, horror-looking CD cover featuring Daddy Dracula rocking a blue baby mutant in his arms, and yet you filled the disc with all sorts of feedback-filled, noisy garage rock. As far as I’m concerned, that’s false advertising, which I’m pretty sure is a violation of some law. If I eat you, I will simply be dishing out justice. Unfortunately, most times I simply bite into whichever head is closest to me when I’m hungry. Dactyl, you lucked the fuck out. –Tarantula Ted (translated by MP Johnson) (Reptilian)

Oh man, if I had the energy that these crazy high-speed garage rockers had, I might have been able to outrun that car that turned me into the rotting corpse that I am today. These guys have so much raw power that I can’t help but shake and dance and bounce around until all of my disintegrating body parts fall to the floor in one big heap. That’s what rock is all about. –Tarantula Ted (translated by MP Johnson) (Black Lung)

Thanks, Tarantula Ted, for all your hard work. Now get back into your hole in the ground. You’re totally stinking up my apartment.