All pictures by Eric Rife

The last time the name Zeke appeared on the Casbah’s roster was for a show cancelled two weeks before they announced their breakup early last year. Zeke returned to San Diego, minus guitarist Abe “Sonny” Zanuel Riggs III, with a forty-five minute barrage of brutal three-chord mayhem. Opening with “Highway Star,” then “Wanna Fuck,” it wasn’t long before bassist Jim Matz became temporarily confused and played the wrong bassline.

“Dude! Something happened to my set list,” he complained, looking desperately around his feet

“Oh yeah,” singer Marky Felchtone replied unsympathetically. “It isn’t like we haven’t been playing the exact same set list for the entire tour.” But it was an easy mistake to make considering the quick, double-ought blasts of songs the band built their reputation on. 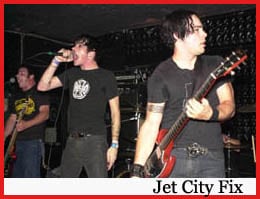 The show opened with Jet City Fix another pop/punk/glam band who hail from Seattle. A little over a year old, the band have made a name for themselves opening for the like of the Makers, Zen Guerrilla, Electric Frankenstein and, believe it or not, Link Wray, who has championed the group since doing a string of dates with them last year. Good credentials and a solid, energetic set, but not really the sort of band one would expect playing with Zeke. Still, there were several standout tracks including “End Transmission,” “Sick of Drugs,” and “Fisticuffs.”

The same was true with Hagfish who also put on a tight show, although my girlfriend noted they sound an awful lot like Blink 182. Decked out in their trademark, natty black suits the band provided an interesting stop gap between Camarosmith and Zeke. Yeah, they were fast, they were loud and they know how to strike a good rock guitar pose. But they still seemed to be a tad out of place. 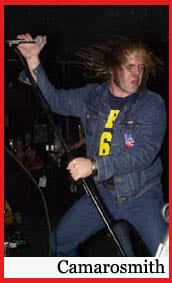 (Ever see a real hagfish? They’re disgusting little eel-type things that can actually tie themselves in knots! They do this as a defense mechanism and to rid themselves of excessive slime, which they produce in grotesque quantities to keep predators at bay. They lack a sympathetic nervous system and spend most of their time burrowing into dead fish and eating them from the inside out! They are found in the antitropical North and South and five million pounds of them are consumed each year in Korea! Wow!)

Camarosmith, featuring Zeke drummer Donny Paycheck as well as Jim Matz, pounded out a tight half hour set that saw lead singer Ben Rew carrying on like Ronnie Van Zandt. Decked out in a denim jacket with muttonchops that covered half his face, Rew and the band cranked up the meaty, arena rock-influenced punk that people seem to either love or hate these days. 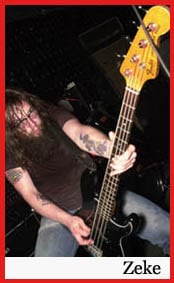 When Zeke hit the stage, they sounded like they were making up for lost time, playing their normal, fifty-five second songs at a pace that seemed to shorten everything down to half a minute. I hate complaining about such things, but goddamn, when it’s that loud, I need at least fifteen to thirty seconds just to recognize a song. Tracks like “Dogfight” (the best song Motorhead never recorded), “Lawson,” “Twisted,” and “Raped” are absolutely brilliant – and are already fast enough. Playing them even faster fucks up the whole thing!

Regardless, it’s good to have them back, although the addition of a second guitarist might take some of the pressure off Felchtone.

SIDEKICKS, THE: Weight of Air: CD