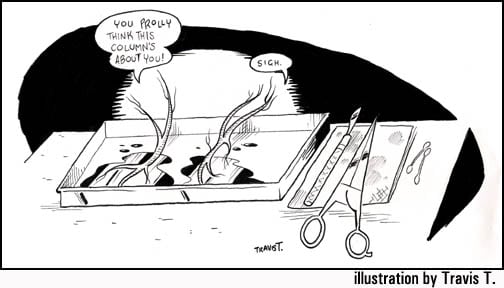 I’m going to entitle this column “You’re so Vein.” Yeah, I know it’s misspelled but you’ll see how clever I am if you read on…

At the time of writing this column I’m forty. I hated being an odd number (thirty-nine). So I was thinking it’s time that I have a small “tune-up” on myself. We all spend way more money on our cars than we do ourselves so I thought the age of forty, a halfway point most likely, would be the perfect time. My first thing I wanted (needed) to fix were my very bad varicose veins on my legs. These aren’t those wussy “spider veins” that your grandma has, people. Imagine about five prehistoric worms from the Amazon implanted just below the surface of your skin and you’ll get the idea of how bad mine were. It was like a 3-D road map on my leg. People would pass me walking and then vomit. I don’t blame them one bit. So, after about twenty years of these pieces of rope in my leg getting worse and worse and more and more painful, and the fact that I now finally have health insurance, thanks to my lovely and beautiful wife Crystal, I decided to go for it.

I thought it would be a walk in the park. Just go in and forty-five minutes later they’re gone. A few days off my feet and I’d be back at work. I was wrong! They gave me about a three and a half inch cut on my ankle and my groin (yes, next to my dick) and inserted a long metal cylinder-like wand, fished around to find the veins and yanked them out! Thank god I was put under. I almost told them to give me a local instead of the general. They also had to cut me another three times over my legs for the ones they couldn’t fish out with this wand. Now, instead of varicose veins I have a bunch of scars on my leg! I think that once my hair grows back, it’ll cover it up. But now I have to stop shaving my legs. And, speaking of shaving, when I woke up, I noticed they shaved my “personal” area. No big deal, but they only shaved half! What’s up with that? Didn’t the insurance cover the whole thing? Are razors that expensive? Or perhaps things were a little “messy” down there and it’s all they could stand. I don’t know.

So, after about two weeks of being off my feet and taking Vicodin, I was ready for my second surgery. Since high school or so, I’ve had this ever increasing bump on my nose. A lot of people say they never noticed but I know they’re just trying to be nice. In any case, it bugged me so I went to get it sanded down. For this, I was awake in a twilight-like state. I knew what they were doing but I didn’t care. Well, I did at first. Before they gave me Valium, or whatever it was they shot in my I.V., they crammed a bunch of cotton swabs in my nose all the way up to my brain, it seemed. It was the worst thing about the surgery. Worse than when they put a metal file up through my nose. Worse than when they used that file to break my nose. It reminded me of the first (or second?) time I was abducted my aliens. Not fun at all. But it’s about a month later and all is well. I now not only have better looking legs, I also have a nose modeled after my TV screen hero and star of my new favorite show, Richard Dean Anderson, of Stargate SG1. No kidding, looks just like his.

Thanks for reading friends. Until next time

P.S. Is it just me or do you also check out old people in crowded situations to see if they’re wearing diapers? What? It’s a logical question.