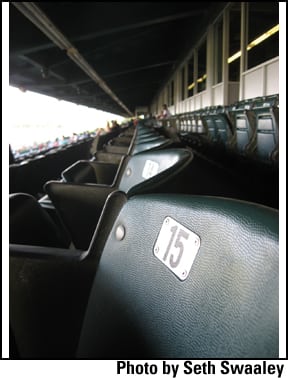 You Ever Heard of Kelso?: You should know, always bet the opposite of what someone tells you.

“Fall off a cliff and die Dominguez! Fall of a cliff and die! Any other jock and dat horse woulda been ten to one!”
I look over to where the sound is coming from thinking this might be the same Puerto Rican I saw about a month ago at the OTB—off track betting—a few blocks from Times Square who grumbled to the TV after losing on a turf race.
“Castellano, your mother is a whore.” Yes, rrrr’s rolled and all.
It’s not the same guy. But dressed in army fatigues, this man’s frustration bears a striking similarity. He leaves the grandstand full of anger and I can’t help but wonder what he’s going to sound like by the time we get to the ninth race. I take it he didn’t have money on Keechi Bullet. I don’t see what the big surprise is. Ramon Dominguez has had the best winning percentage at Belmont for years and, even with average horses, he’s at the top of his game on a muddy track.
It’s a quiet, sunny Wednesday in September out at BelmontPark just after a night of heavy rain. The horses and jockeys are covered in mud, stuck in the elements as we sit comfortably under the sun and blue sky. We’re studying and marking up our racing forms like Bibles, searching for unknown truths and wagering small dreams on two-dollar exactas, trifectas, and Pick 3’s. In the third I keep it simple and put ten dollars to win on Wishful Tomcat, watch him run a perfect race, and come back with twenty-five.
The stands are rather empty, hollowed remains of what once was. The pictures of Secretariat, War Admiral, Seattle Slew, Bill Shoemaker, Sunny “Jim” Fitzsimmons above the tellers remind us of a different era. Still, a few folks come out. I hear the senior couple next to me planning on the next race. The husband, his eyes hiding behind a huge pair of black sunglasses, looks through the past performances and gives a detailed description of each of the races and the conditions. The wife says she’s going for the four horse. Four was her mother’s favorite number. The husband laughs, but knows she’s got just as good of a chance as he does.
Mystery Man is dressed in slacks, a tie, and straw hat. He shows up and takes his usual seat at the lower part of the bleachers. Meticulously, he wipes down his seat over and over with a napkin, trying to get rid of any leftover germs and bad fortuity. He then sits down, crosses his legs, pulls out his notebook of numbers, and gracefully chews on a yellow apple that fashionably matches his shirt. He surveys the track and the tote board with the air of a man who knows what he’s doing. In the three months I’ve been coming out to Belmont, I’ve never heard the man speak a word to anyone and I’ve always watched him leave by the seventh race. He must be winning.
A man with very few teeth, dressed in what appears to be a mechanics uniform and the nametag, Gus, stands next to me in the back of the stands. He looks at my notebook with random notes on each of the horses running. Despite hours of research and systems, it really hasn’t done me any good.
“You keep records of all this shit?”
“I try, but I’m starting to wonder.”
“You got any tips?”
“All I know is don’t bet the horse out in front first and the one likely to get on the rail.”
“Oh, the track’s biased. The rail’s bad, eh?”
“Seems so. If they get stuck on the rail, it’s like they’re running in quicksand.  They don’t have a chance.”
“I hate an uneven track. There’s no way you can win. Hell, a closer like Kelso couldn’t even win on an uneven track. You know who Kelso was? Yeah, one of the greatest horses ever. I was here to see him. I’ve been coming here since 1953 and I ain’t never seen anyone win out here. Not one. You can’t. How can you win when you bet a hundred dollars and you’re already down to seventy-five?” (He’s referring to the twenty-five percent the track automatically takes out from exotic bets.) It’s impossible. Where’s my program? I’ll show you.”
Gus goes rummaging through a bag of what looks like newspapers and oranges. “Ah, where’s my program? What a schmuck, I left my program at home. Can you believe that? Shit, I’ll see ya.”
“Good luck.”
“Yeah, right,” he says, lacking any sense of confidence.