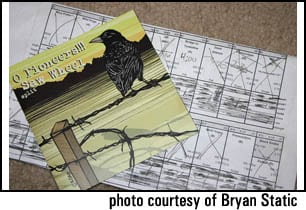 You Can Only Avoid Complaining For So Long: Bryan Static’s Fourth Column

I was hired for my first job at a movie theater during spring break. Thinking it would be a rewarding experience and a decent way to get money, I decided to go for it. I can’t say it was the job from hell because I haven’t done much other work. All I know is it that this job sucked. The signs should have been obvious—they were hiring at a booth in my school’s lunch area—obviously they were short staffed and it didn’t even occur to me that spring break was next week. So two friends of mine and I signed up for jobs at minimum wage.

The next sign that something was amiss was that orientation was the same night. It didn’t bother me too much. We went and filled out some papers. We showed up the next night for work. The standard uniform was a white dress shirt, a red bow-tie, black slacks, black shoes, black socks and a belt. We were given name tags, a bow tie, and the tour. We learned the secret combination to open the doors. We learned all the exciting secrets of this theater (e.g. movie theater popcorn is one of the most disgusting foods on the planet).

Nothing seemed too bad. The shift tonight was only four hours. It was a school night, but nobody cared. We did the work and set out to go home. The next day, I met the nightmare that shall only be referred to as Osborne. Osborne was senior staff; he took the job way too seriously. Every action he called was as if his life depended on it. “NOOOOOOOO! Bryan! That’s not how you sweep! You go from left to right in quick strokes! Not right to left in short bursts!” Osborne was absolute hell. If I was to finish a job and he didn’t believe I did it, he’d go send me to do it again instead of checking.

We were told we would have to work until closing the next night. I inquired as to when closing would be. “Oh, about one in the morning.” Shit. They didn’t tell me this stuff when I signed up for the job. To top it all off, a new movie was premiering the next day. It was called 300 and I had never heard of it.

So I showed up at six o’clock in the afternoon for my shift. Breaks weren’t a big deal on the four hour shifts, though they were only twenty minutes long. I asked about breaks on the longer shifts. “All breaks are twenty minutes.” Fuck! I have a seven hour shift and I only get twenty minutes for a shitty dinner of movie theater food? Further research shows that Texas has no laws requiring employers to give breaks at all.

The real trouble came at eleven o’clock when we found out we were going to have another showing of 300 so we weren’t closing until four in the morning. I got my break at one in the morning and called my father. I can’t say he was pleased about having me at work so late.

The shows were all sold out and sweeping up a theater in a multiplex that sold beer was no fun. Sticky goo and broken bottles were everywhere. It was not uncommon to find wrappers from food not sold in the theater, but even more perplexing was the food packaging I haven’t seen since my childhood.

We also got out schedules that day. There was ray of light. I had Tuesday off. This particular Tuesday a show was taking place. Good shows are a rare thing in my town, which is odd because San Antonio has a population of over one million, but only thirty people actually listen to music. O Pioneers!!! were playing with Bomb The Music Industry! It was the battle of the exclamation points.

I had one more horrible day of work before the show. When I arrived I was pissed and annoyed. It was one of the worst weeks of my life. I watched one opening band before the almighty Bomb The Music Industry! took the stage and then all my problems just left me.

I had never felt so bad before a show before. Every time I went to a show I was always excited because it was a chance to see some of my favorite bands play some really good songs. It was a very strange feeling for me.

The venue was a small pizza place downtown. The sound was loud in the tiny room and it was just magnificent. They didn’t play my favorite song, but they played enough good ones that I was feeling so much better. I had no idea work could hurt my spirit so much. And life only got better as O Pioneers!!! played their set.

After the music died down, I said hi to Jeff from BTMI and Jeff from OP!!! (who recently quit, good luck to whatever you do Jeff) and I left the venue. My dad was out doing some business so I had a good thirty or forty minutes before he would pick me up. So I sat outside reading some record reviews. A person came over and we talked about the zine I was reading. If I’m not mistaken, this person was Aaron Danger, of close connection to O Pioneers!!! Well, things happened and I ended up talking with members of OP!!!, BTMI!, and the infamous Mitch Clem outside the venue. Jeff from OP!!! was cool enough to give me a free copy of their split CD with Saw Wheel because I had no money.

I went to work the next day wearing an O Pioneers!!! shirt under my work shirt. You could easily see through it, but I was too lazy to find a good undershirt. My mind was carefree. I didn’t mind having an eight hour shift that night. I didn’t give a rat’s ass that the managers were always yelling. My ears were buzzing from the night before and I was so happy I couldn’t tell you if I even did any work that day.