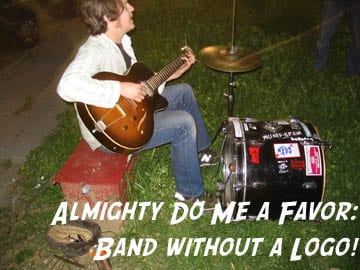 Yoda Says You Can't Play Here: An Interview with Almighty Do Me a Favor By Todd Taylor

I've been to enough school talent shows and open mic nights to know that I'm not exactly a fan of people playing their guitars without the aid of distortion or a backing band. Pretty singing and pretty playing don't really excite me. Luckily, Almighty Do Me a Favor, a one-man band, bypasses that. It's not sensitive, weepy coffee shop fodder; it's more like the crazy era of Bob Dylan (Bringing It All Back Home/Highway 61 Revisited) coupled with throat polyps and a damn-near-unmatched level of functional alcoholism. He's dealt with a flying mattress and a flying rhombus to get to shows, he's weathered the storm of some of my finest heckles, and even though he went the corporate route and traded in his washboard for a more conventional high-hat, he makes really good music. Let's just say that there's no longer any doubt as to whether or not he can musically exist outside of Shoot 'Em Down. 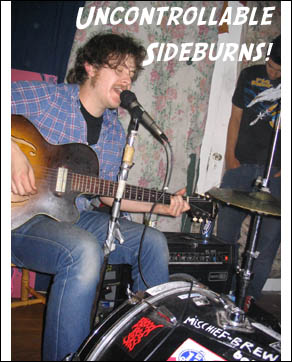 Amy: So, like, what was your most favorite-est board to skate on?
Bradley: Uh, I dunno... I had so many.
Amy: No! If you had to choose. Like, what board would you skate... if you were in HEAVEN?!
Bradley: [laughs] I guess my Tommy Guerrero board. You saw it in Bama.
Amy: I did?
Bradley: Yeah. My brother drug it behind a four-wheeler through the snow. He did it to several of 'em. It was mauled. That was the only one I saved.
Amy: Oh yeah...
Bradley: Another question!
Amy: Um... how old were you when you first skated?
Bradley: Twelve. I had a blonde mullet and OP shorts. Another question!
Amy: Hrm... Given the present state of your facial hair, how does the 'stache effect your skating?
Bradley: It doesn't. I don't skate with my mouth.
[We both laugh. Maybe this was funnier to just the two of us...]
Amy: So, when you were a kid, and you had that mullet, how did the mullet effect your skaing then?
Bradley: It was like a cape and helped me fly.

www.almightydomeafavor.com or click here to hear him do his thing on friggin' MySpace.