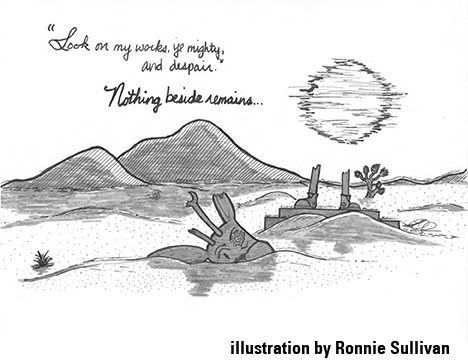 Year of the Jackalope - Nothing Ever Ends

Percy Bysshe Shelley weaves the secondhand tale of a desert traveler stumbling upon a broken statue of Egyptian pharaoh Ramses II in his sonnet "Ozymandias." The reading on the statue’s pedestal is probably the work's most famous line: “I am Ozymandias, King of Kings. Look upon my works, ye Mighty, and despair.” When the traveler looks, all he  sees is a destroyed monument surrounded in barren dirt.

The irony is not even the stone statue remains intact from this great personal achievement. It’s not lost on the traveler, who describes the tattered state of the statue and the pedestal. The traveler looks around in the end to see… nothing.

Dr. Manhattan makes this point even more bluntly to Adrian Veidt, the former hero known as Ozymandias, in Alan Moore and Dave Gibbons’s Watchmen. Adrian at one point thinks he has achieved world peace at a cost he believes will ultimately be justified in the end. Dr. Manhattan smirks at the shortsightedness when he says, “In the end, Adrian? Nothing ends. Nothing ever ends.”

I’ve been coming to terms with this truth in my own way. 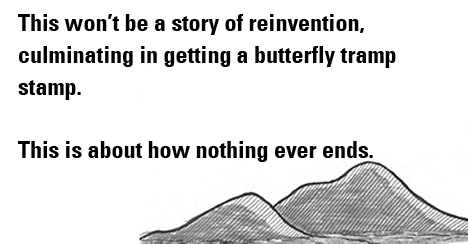 My former wife and I filed for divorce in early 2014. It marked the end of our long relationship. I’ll keep the details of why to myself. This won’t degenerate into self-loathing projected onto a previous lover. This also won’t be a story of reinvention, culminating in getting a butterfly tramp stamp. Instead, this is about how nothing ever ends.

It’s true. The end of my marriage felt like an ending, sure. However, it was really more like the catalyst that moves a plot from Act I to Act II. The only thing that ended was my role in my ex-wife’s life and her role in mine. Meanwhile, earth continues to spin.

I spent about six months sleepwalking through life when I moved out. This “ending” left me feeling like an object lost in space without an orbit. I managed through it, knowing that some days would just suck. I often spent parts of my good days preparing for them.

Four days after moving out, I was in an unexpected good mood. I can’t explain where it came from or why my mood had flipped. I just knew to roll with it. Later in the day, I started writing in a journal. Even as I look back on that entry, everything was filled with optimism. I was the only person who would read it, so I left myself a note and dog-eared the page. The note read: “You’re fine. Remain sharp and attentive. Never doubt that you’re awesome.”Despite its simplicity, the note worked for getting me through some tougher times. 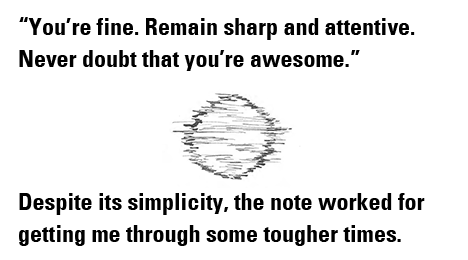 It wasn't a special moment when I emerged from the fog of my sleepwalk. I didn’t run in the rain like Lloyd Dobbler and claim the water to be a baptism. I just suddenly started having a consistent string of good days and the bad times were shorter.

The note took an even more powerful meaning. I had spent the previous months convinced that I was experiencing an ending. Yet, that note proved something inside of me knew that wasn’t the case. In leaving notes of encouragement to my future self, I recognized that there would be more tomorrows and that some of them were going to need an emotional boost.

I still remained, despite my marriage's end. To look on life now as some “new self,” would be to negate my past. I was married, and a half-decade of it shaped me into the man I am today. Just as my years in Portland, college, and lower income neighborhoods have done the same. Just like these post-divorce years will in my thirties and beyond.

It sort of sounds like a combo attack of cliché rhetoric: I only have this one life. There are no guarantees as to what happens after, or when it’s over. Even as my life ends, time continues. Nothing ever ends.

That is where both Ramses II and Adrian Veidt fell short. They both dedicated a great amount of personal time and energy in ultimately vain attempts to change the world, while ignoring the past, the present, and everyone else. For Ramses II, what about his empire did he think wouldn’t fall like the ones before it (and the several after)? For Adrian, what about his plan ensured that human nature wouldn’t reemerge in the form of fucking, fighting, and stealing for power? They were bound to happen because we have thousands of years of written history that retell the same stories.

For both men named Ozymandias, they forgot about right now. I’m willing to bet being a part of Ramses II’s growing empire wasn’t pleasant for many people. Adrian Veidt’s vision for a better future required a great sacrifice on the well-being of the present.

What’s wrong with taking this time and energy and making the present pleasant?

I hear all the time about how much this world sucks and how it’s about to end. Most of it is beyond my control. However, I’ve managed to be content in life by being positive in my personal communities. When I was low, people who love me for my positive attitude rallied to help. I in turn worked hard to become that positive person again. It brought me back in touch with what’s in front of me. My ex-wife and marriage began to fade behind me as everything does in a rearview mirror. A good number of people stuck around for the ride forward.

I feel like that’s really what Alan Moore and Dave Gibbons were getting at in Watchmen. The graphic novel is marked with the legendary nuclear doomsday clock looming over the story. The clock on the first pages of issue one is set to 11:48, twelve minutes until doomsday. As each of the twelve issues move along, the clock ticks a minute closer to midnight. The characters are aware that the world may be ending soon and each chooses to go about the information in different ways. The characters like Adrian or Rorschach, who want to change the world forever, tend to be the loneliest. The rest of them are, in their own way, tending to the present and taking care of the other people in it.

Minor characters show the little ways it works. There’s the newspaper vendor who normally shoos off freeloading readers, who lets a young boy read for free because it makes him happy, even if only for a moment. The psychotherapist assigned to Rorschach feels guilt because he has to juggle between personal and professional lives. All he wants to do is help everyone be content.

It’s no accident the two main characters who exhibit this behavior best are legacy heroes, the Night Owl II and Silk Spectre II. The original Night Owl retired and passed his mantle to a young fan with a fancy for technology. Silk Spectre II is the daughter of the first. While their other hero counterparts are trying to change the world, these two feel powerless when thinking about the future. In a pivotal scene, they are talking, without hope, about how to save the planet when they spot a nearby building on fire. They stop talking and start acting to save the people inside. Both feel vindicated and alive after transporting a group of people to a safer rooftop and alerting the authorities. They have the ability to see how important the present and everyone in it is. Their talk about the future isn’t as hopeless afterward because they realize they’re actually saving the present, which is much more tangible and in need of attention.

That’s where I am. I am here, and it needs my attention. The future is uncertain and attempting to control it from the present is often fruitless. The past? Well, only a fool trips on what’s behind them. I’m just moving forward as the present slowly reveals the future and trying to be a good person along the way. It’s the only way I know how to make the future better.

I am a positive enough person to find something good to take away from both Ozymandias: Be proud of my personal achievements.

Shelley showcased the broken statue and desolate desert, but the reading on the pedestal tells me Ramses II was proud of what he did. Despite the awful things Adrian Veidt did to get his world peace, there is a moment when he looks up at the news reports from around the world declaring peace between the United States and the U.S.S.R. and with tears in his eyes, says, “I did it!” (Go figure. It’s the only moment Adrian acknowledges being in the present.)

Who cares if a millennia from now some poet shits on what I did with my life? It’s really on me to be proud of who I am and what I do.

It isn’t likely that my achievements will continue to touch people long after I die. That isn’t meant to sound bleak or cynical. I choose instead to see it as a reminder that what I can touch is right here and now. I can make a positive impact in the lives of others by just being a decent person in the present. I believe it’s important to be part of a long line of other people who kept the world going with the little things. Isn’t that a great legacy to be a part of in a world where nothing ever ends?

“Ah, caught a glimpse of the action
Since that day, I felt the passion
Don’t just talk, go make it happen
Three points in the clutch, John Paxson.”
–K. Flay, “So Fast, So Maybe”