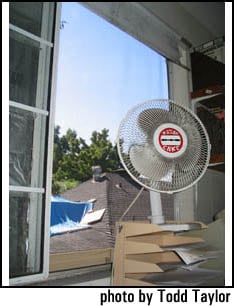 (Jan Roehlk, who works on the great German fanzine, Trust (http://www.trust-zine.de/) asked me to write about the topic of “work” for an issue they were putting together. Seeing as they translated what I’d written into German and we’re dumb Americans, I asked permission to reprint it in English. He said it’d be cool to post it up on Razorcake.org. So, here it is in a slightly different version.)

My name’s Todd and I’m the editor and publisher of Razorcake Fanzine and this here website. We’re the only official non-profit zine in America primarily dedicated to supporting independent music culture. It’s been my full-time job for almost seven years. Prior to that, I worked at Flipside Fanzine for five years.

I had bosses I didn’t care for, but, largely, I was left alone because I’m a good worker. I keep my mouth shut, pick things up quickly, do what I have to, admit when I fuck up, and split after the job’s done. I can be a good robot. 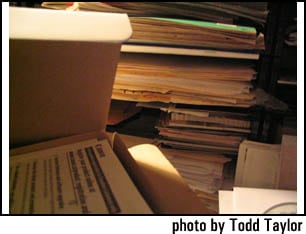 Looking back, a lot of it was spite. I knew, pretty much exactly, what I hated: brain-deadening work, being constantly underpaid, feeling my spirit getting crushed into dust. The usual. It’s called work and not a party for a reason.

The real trick was to find something that I was good at, that I liked, and that I could control. It’s much easier to get Stockholm Syndrome with your hatred of a job than work on a solution. Fortunately, I picked up some good habits along the way. I saved as much money as I could and pretended that my savings didn’t exist. I treat credit cards like cash. I’ve never paid a penny in interest. I just don’t buy something if I don’t have the money for it. Patently un-American behavior.

After I graduated college, I turned down an offer to pursue a Ph.D. in literature. I had done well in school, yet, I felt my hatred—for being so controlled on what to focus on—becoming mentally dangerous to me.

Then a weird series of events happened. My grandmother got very ill, so I moved to California to live with her. A year later, I moved down to Los Angeles, was roasting coffee in the mornings, and put in a cold call to Flipside. They didn’t get back to me for six months and, and when they did, were impressed most by the fact I had a valid driver’s license and could pick up mail. 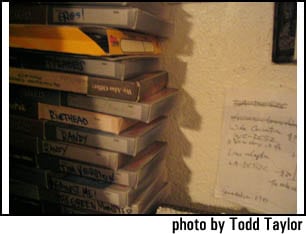 I found myself at another poor-paying job, but it was right in the middle of the then-longest running punk rock zine in existence and I loved it.

When I was thirteen, I just wanted my life to start. I remember being constantly frustrated, spending a good chunk of my time reading about and studying dead people. At twenty-three, it felt like my creative life and job had finally become one. I felt alive.

Five years into Flipside, the magazine took a huge shit beyond my control and went out of business. Disoriented, I slowly realized that this was the time to turn all the loathing I’d felt in someone else’s system and try to make my own; a better one.

I get paid even worse now that I work for myself, but I’m definitely more satisfied.

My work-for-myself philosophy is simple: be fair and try not to go out of business. Sustainable yield. Keep risks small. 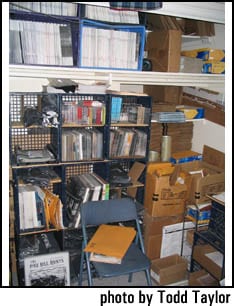 When I tell people that I’m self-employed, the most common response is, “Man, you’re lucky.” Sure, I get to listen to music all day. Music I love. I like myself, so I don’t hate my boss. My commute is great. I live in a two-bedroom apartment. I sleep in one bedroom. Razorcake’s run out of the other one. I save a lot on gas. I get to choose the focus of what I do on any given day. I did my laundry in the middle of the day today. If I plan, I can take any day off I want. I can approach any band I’d like to interview.

But it’s not all gravy. Weekends mean less when you work through most of them. I’ve worked, on average, seventy hours a week since Razorcake started. When I take a day off, I have to work harder the day before and after it just to stay on schedule.

Ideals don’t mean dick without a huge helping of self-discipline over the long haul. In utopia, no one has to pay bills, no one breaks a bone, there are no termite invasions, there’s a cold beer fountain in the front room that never goes dry.

If I don’t do my job, it doesn’t get done. There’s no one I can blame except myself. As of writing this, we’ve put out forty issues in eighty months. Right on schedule. There’s no “golden button.” There’s no “someone else will fix it.” Corporations can work efficiently because the labor is compartmentalized. The people in the payroll department don’t have to worry about mailing codes or learn how to fix a computer or a toilet. They just make a call and someone else repairs it. Being self-employed, DIY, and to stay in business, I’ve spent a ton of time learning things I have no real interest in—time away from writing, taking photos, editing, and graphic design—the initial reasons that drew me into making a zine. Now I know how to make a non-profit budget, understand the minutia of postal regulations, and have to master whatever paperwork is coming in the mail tomorrow from some government agency asking for a fact or figure from us or we’ll get penalized. I can’t say I’m really happy about that. 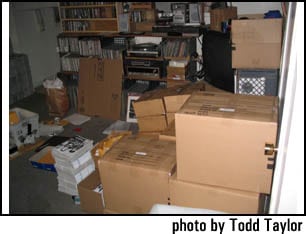 It’s a strange existence; to pay dearly and constantly for not following anyone else’s vision. To have fun and work almost inseparable sometimes. To not be able to separate the monkey and robot parts of my brain all of the time. To still have to think, after over a decade of straight-ahead toil: “I don’t think I can afford to buy that record or pay for that show,” but sleeping like a baby and waking up, ready for more.

When I think of the alternative, when I think of just walking away from everything that’s been built within Razorcake, I just see a black hole: a tremendous force sucking all light from around it. I can’t think beyond the darkness into that future, and that’s what makes me think I’m doing the right thing for me right now, no matter how hard it continues to be.