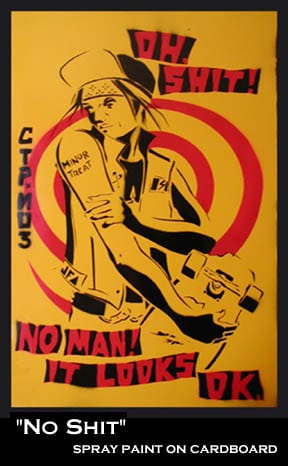 Wino Roping:: The Stencil Art of Chris Francis By Bradley

There was this guy who lived across the street from me. He wore horn-rimmed glasses, a black ball cap, and always seemed to have on a Fear or DRI t-shirt. I saw this guy around for a while. The building that I live in requires that I go out to the street to use my cell phone. (This is L.A. We all have a cell phone) The rumor was that we had lead paint on the walls of my apartment building and that is why we got no reception as well as shitty radio service. The point is that I would see this guy outside while I was on the phone. He looked like the kind of fellow who would like to sit down at the bar. So one day, on my way home from work, I saw him outside spray painting the sidewalk. I decided to walk up. During the conversation that followed, I came to find out that this fellow thought I was a security guard for the parking deck next door. He said they'd watch me using my phone and think that I was trying to bust him for spray painting on the sidewalk. I told him that was the most ridiculous thing I'd ever heard. And after hanging with Chris Francis for a few months I came to see the town in a whole different light: people with names like Pattern Man, the Crimson Ghost, and 101 and people who inhabited the apartment's dumpsters and crack smoking alleyways around the house came to be the constant center of conversation. Mr. Francis is an interesting fellow, and I doubt that this short interview will even come close to letting y'all in on him. 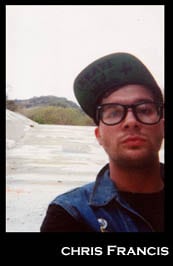 BD: How did you get started doing stencils?
Chris: Basically, what I did was I cut them out of grip tape. I mean, it wasn't even spray painted at all. It was just grip tape designs. I tried to make Corrosion of Conformity stencils on my skateboard, then after that I thought it would be a good way to make punk rock t-shirts 'cause I couldn't afford to buy any then. I didn't really take it seriously until I dropped out of art school and I had no money for paint and just hopped on the freight trains and started cutting stencils out of cardboard, out of beer boxes, and other stuff along the way.
BD: So, for how long were you hopping trains?
Chris: About four years.
BD: Was it pretty solid the whole time?
Chris: Yeah, it was mostly solid the whole time, like livin' on them in wintertime and in the summertime, traveling the whole country back and forth - going to L.A. in the wintertime, then going back to Baltimore, just making my rounds across the country. I don't know, like the whole way I just cut stencils? after I'd got tired of carrying them around, I'd just mail them back to my family back in Indiana.
BD: What kind of jobs, if any, did you have while in between riding trains? 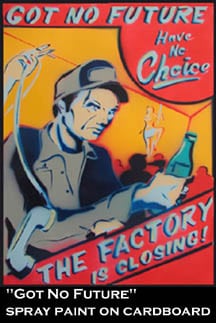 Chris: I was lumberjacking. I was a topper in southern Indiana and northern Indiana. I was topping out trees in western Maryland and around Baltimore. I did a lot of construction work, built several houses, from the ground up. I'd stay in town and do that. I worked out on three different ships swordfishing, shark fishing, and oyster dredging. I worked in steel mills, did all kinds of crazy junk.
BD: Were you working with any labor organizations?
Chris: It was mostly independent. I've never been hired by a labor union. I just took it upon myself to document what I was seeing in different work situations
BD: Here's the artsy question. Of all the traveling and the work that you've done, how much of that would you say comes out in your stencils?
Chris: A lot of those when I was on the road had everything to do with being on the road, working dangerous jobs. I mean, it was a lot of documentation of labor. That was one of my goals when I was out on the freight trains - to document labor in the United States, and to actually be a part of it, work the jobs I was talking about. I've never done a poster about a job that I didn't actually do myself. I don't reflect back on that all that much with my work now. Most of it just kind of reflects the environment I live in now.
BD: Like the girly stencils? 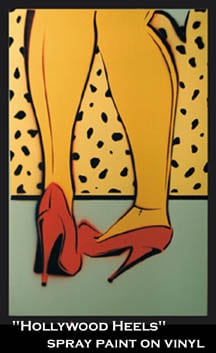 Chris: Yeah, I guess so, living in Hollywood.
BD: There's other styles of graffiti, but what was it about stencils that appealed to you more?
Chris: I like to have complete control over what I'm working with. With a stencil, I know my line's gonna be a hard edge. Like I?. It's kind of?. Ah, it's just something I've learned to use to get my point across. As far as graffiti goes, I mean I never really considered myself a graffiti artist. I would go out and post stuff out on the streets, hit up the sides of freight trains, maybe do a hundred cars in a two day span. I didn't really look at it as graffiti. It was just something that I did.
BD: How many different stencils, not just throwing them up, but how many stencils have you cut out, 'cause I know you got a shit load of them upstairs.
Chris: Man, I don't know, probably a hundred, possibly more. I don't really know. A lot of them have been lost. A lot of them weren't worth keeping.
BD: What music are you into? What do you listen to while working on stencils?
Chris: Ah? mostly JFA, the Faction, Drunk Injuns, Code of Honor, mostly?.
BD: I don't really have a wrap-up question, so can you think of anything you might want to say, sort of wrap it up, about doing stuff and stuff? 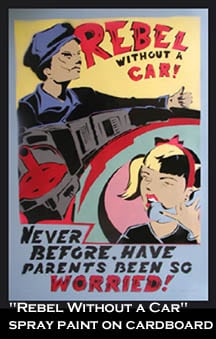 Chris: I don't know. I guess the reason I took such a strong labor standpoint was because I grew up with steel mills all around me so I've seen labor from when I was a kid. I grew up in a working class family. When I went to art school for a year, I had like a full scholarship and hated it. That's another of the big reasons I started hopping freight trains, 'cause I despised art school and I really don't - I don't really consider myself an artist too much. I just make stuff.
BD: Wait. I do have some more. How can you explain this skill with the lasso work that you can do, primarily the crack head roping? How does this play into your work?
Chris: I can't ride a horse so I got on a bike and started roping kids. Worked my way up and started roping winos, women, and poles. I do whatever it takes.

For information about his stencils: [email protected]