Before I start, I wanna say what my alternate titles for this piece were; “Drunken Weekend Booze Fest” and “Up ‘Til Six Every Night.” Also, I looked on this illustrious site, and didn’t see that anyone had made any mention of this weekend of music in Chicago, so I figured what the hell. Not to mention, it has been a while since I graced this interweb site page thing.

If you’ve gone to this, then you know it’s pretty cool. If you haven’t, then I hope you will think it’s pretty cool after you’ve read this. I missed last year ‘cause I had no money. Dave Merriman once told me that this “fest” was Chicago’s version of Fest in Gainesville. He ended up being right, except for the fact that the whole thing took place at Subterranean. Not a bad thing at all. So, I was gonna go by myself on the Greyhound ‘cause the only other people I knew going from St. Louis weren’t going ‘til Sunday of that weekend. I wanted to do the whole thing.

Then, I found out Slow Death was playing St. Louis the night before the fest. Even though I had already bought a twenty-five dollar non-refundable ticket on the bus, I traded Slow Death a place to stay for a place in their van the next day. DEAL! That Friday morning, after playing hide and seek with Jesse Thorson’s bass, we made our way to the windy city. Once there, we docked up at Mike and Jimmy’s house of Sass Dragons fame. Dudes were hangin’ out and barbequing. After a while, we walked down to “Sub-T” as I heard the locals call it. Twenty minutes or so. Cans of Busch were only two dollars, so that started things off nicely.

Friday bands were all cool, for the most part: Toys That Kill, VacationBibleSchool, Dude Jams, Stoned At Heart. Mikey Erg played an acoustic set. That was cool. He did not mention that all the songs were gonna be in the key of “suck job,” which he agreed to doing so on the ride up there. Bummer. He was joined by one Lil’ Dave Merriman for a few cuts, and then Dave did his own solo deal. One thing worth mentioning is that Baby J from Stoned At Heart was wasted. Totally awesome. She couldn’t stand up before the show was over. Way to go, Baby J!

After the show was over, it was back to Mike and Jimmy’s for drinking booze until the sun was up. Around six or so, I found myself “interviewing” Brandon from Dude Jams and his girlfriend Chelsea, but without a tape recorder or pen and paper. So that’ll never see the light of day. There were still ten or so people up, but I figured it would be nice to lay on a floor at my friends’ house where no one would be up drinking still. I know. I’m a pussy. Although I heard bacon got barbequed around 9 AM. I was staying with Kevin and Ben from Deth Warrant. Check ‘em out. 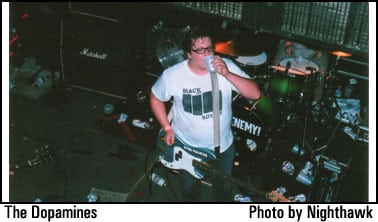 Saturday, I got up somewhere around one and got my shit together. There was another Dude staying at Kevin and Ben’s—Eric, who lives in Carbondale, IL—which is where Kevin’s from. Anyway, he didn’t have a ticket for either show on Saturday. I bought the weekend pass. Him and Kevin (proper grammar) were going to hang with Jimmy Sass Dragons. I hoofed it down there with some Dude whose name I forgot.

The only band I liked on the Saturday afternoon show was Nato Coles And The Blue Diamond Band. Solid rock‘n’roll. I know, everyone’s gonna not think I’m cool ‘cause I don’t really like Cheap Girls. They’re good and all, but it’s just not for me. I’m not into it, okay? Noise By Numbers, Vapid’s newest band, was way too long and drawn out for me. Pretty good pop stuff, but put me to bed already. Sorry, Dan. And I think The Menzingers sound like too many other bands. Banner Pilot was good, though. Second time seeing them. And The Ataris? Seriously? I guess just a ploy to sell tickets. My band in high school played with ‘em in the ‘90s, and they sucked then.

After Banner Pilot finished, it was off to Jimmy and Mike’s, for yet another BBQ. Those Dudes must have stock in charcoal. I figured three mini-Slim Jims and a bag of Fritos wasn’t gonna do it, which is all I’d eaten that day. After a few more beers and some BBQ, we hoofed it back down to Sub-T. For the night show, I enjoyed Slow Death. The Mushuganas are a fun band to watch. As far as for Winepress and Lynyrd’s Innards, just wasn’t really into it. I know they’re local legends or whatever, but not for me. Way to keep rockin’ it, though. Oh, and Kepi Ghoulie made an appearance, which he said was a last-minute thing. Good deal, too. Him and Dino really brought it acoustic. They even played the classic Ghoulies number, “Doin’ Fine” two times. Awesome! By the end of the show, my pants were around my ankles and my hat was on Jon Weiner’s girlfriend’s head. The Dopamines crew rolled up that night. I was also plastering Dudes Magazine stickers all over the club.

We ended up cruising with Nato to this girl Amy’s apartment. I brought a thirty pack of Busch for good measure. By around 3 AM, me and Mike from The Manix were prank calling people back in St. Louis. The Dude Jams crew showed up, and so did Lil’ Dave. After a while, I puked all over her back steps. Then, I blacked out.

Sunday, around 1:30, I came to. My plan was to go to Wrigley for the Cards/Cubs game at 1:20. Kinda hard to do when, by all accounts, I was up ‘til about six and was passed out ‘til after the game started. So, I got directions on how to get to Kevin and Ben’s from Amy. What a walk that was. After we finished watching the game, we walked down to a pizza place that was right by Sub-T. It’s called Piece, and it’s owned by one Mr. Rick Nielsen. Cool place. Kevin and Ben seemed to know half the people working there, so we got the employee discount. NICE! Then, it was over to the club.

I missed the Turkletons ‘cause I was out looking for decently-priced smokes. Which don’t exist in Chicago. Those Dudes are cool Dudes, though. I did not miss, however, The Transgressions. Holy shit! Like two songs in, I told myself I had to buy some shit. That’s saying a lot ‘cause all my money usually just goes to beer. They fucking rule. Traded ‘em a Dudes Mag for a CD. And, I bought their split with The Side Project. Good stuff. God Damn Doo Wop Band played. They were good, and even better with Annie on vox, in addition to the three girls I saw sing back in January. Nothing like four hot chicks singing great music. Jetty Boys were alright. Again, not into ‘em really. They sound too much like Green Day, more specifically Drew sounds too much like Billie Joe. No offense. I love Green Day. Well, up ‘til Insomniac. Be My Doppelganger was really good, too. Mikey from Slow Death played drums. The Dopamines brought the rock also. And Mikey played second guitar with them. He also played drums for Doo Wop. I think his set count hit around five or six. AND THEN, THE TEEN IDOLS! Hadn’t seen them in like eight to ten years. It was fucking good. Philip Hill knows what he’s doing, for sure. Heather is way hotter than the new girl, Yvonne, but she’s still pretty hot. They played all the songs I—and everyone—wanted to hear. It’s a shame they don’t really tour, even though they’re back together. Oh, well.

After the show, I met Jeff. He’s the guy who put it all together. Good guy, for sure. After dispensing the rest of the Dudes Mags I had brought up there, it was off to party some more. I think it was this night where my friend Aaron, from The Rushmores (R.I.P.), and his girlfriend had a bottle of tequila. It was go time. He also had this green plastic bottle that was in the shape of a lime. It was the lime juice. Who’d a thunk it? For whatever reason, I squirted the shit in my eyes. It didn’t hurt until about 30 seconds later, at which point it fucking burned like nothing else. A bunch of beer got poured on people, too. Me and Jimmy ended up naked in his back yard. He lived there, and I was a guest, so why not? And, I decided to write shit all over my chest and stomach. DUMB.

And me and Mikey Erg were doing the different versions of “Doin’ Fine” by the Ghoulies. The different versions being all the classic Lookout! frontmen; Joe Queer, Kepi, Ben Weasel, Dr. Frank., etc. Mikey’s Tim Barry impression was great. So we just screamed that at each other for a while, and then we kept screaming, “It’s not about you, it’s about me. Please leave me alone.” A little OWTH tribute in the kitchen, if you will. I also realized that every girl I talked to ended up being someone’s girlfriend. Although one of those girls said she wanted to do an advice column for Dudes Mag. Shayla’s cool. I heard she’s taking requests on some message board. So I just poured more beer on myself and drank more beer until I pretty much blacked out and lost my tank top and shorts. I ended up at Kevin and Ben’s in just my underwear and shoes. I should mention also, that you have to walk past an elementary school to get from one house to the other. Good thing it was the weekend. Ha! After a few hours on the floor, I took a shower and rolled back home with Mr. Adam Butz and co. What a weekend. My shorts ended up in a kitchen cabinet. Tank top was on a chair.

Oh, then I got drunk in St. Louis. It was Memorial Day. I had to.

COWBOYS, THE: Bottom of a Rotten Flower: LP