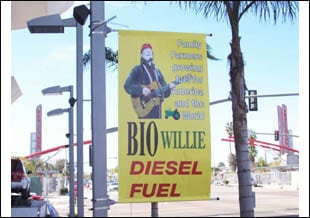 One of the most pressing issues our society currently faces revolves around our dependency on a non-renewable fuel source, specifically oil. Today Willie Nelson came to town to promote his new Bio Diesel product known as Bio Willie. The event took place at Pearson Ford, which is the first Bio Diesel fueling center on the west coast. This more ecologically friendly fuel is composed of eighty percent diesel and twenty percent bio diesel. Bio diesel is derived from domestically produced renewable sources including soybeans, recycled food oils, and other agricultural livestock. A pamphlet I found while enjoying the festivities proclaimed that bio diesel is ten times less toxic than table salt! So why aren't we already using bio diesel as a main source for fuel in our vehicles?

The problem stems from our long held dependency on oil. As our society slowly realizes the consequences of our actions, alternative lifestyle choices start to make more sense. There are still those who disbelieve in global warming, just as there were those who once laughed at a heliocentric model of the universe. Time will tell where humankind draws the line on our own existence. This subject takes me back to alternative fuel sources.

Our dependency on foreign oil accounts for sixty percent of our country's oil consumption. This dependency, believe it or not, sparks wars, and also has a negative effect on our planet from the oil spills of Exxon Valdez to the emissions of combustible engines daily clouding our skies with smoke and carbon dioxide emissions. The Greenhouse effect is generally considered to be occurring among the world wide scientific community.

One hundred years ago the first diesel engine ran on peanut oil. Our advancements as a civilization, especially science, have been staggering in the time that has passed since then. It is currently absolutely possible to run your car on only vegetable oil that's already been used by fast food restaurants. Actress Daryl Hannah drives one such vehicle. She was also in attendance today to help Willie promote his new fuel. The specifics of setting your vehicle up to run on vegetable oil is readily available online in such places as www.biodiesel.com. Other groups such as www.cleanfuelcaravan.org attempt to utilize only non-petroleum based fuels to achieve a sustainable environment. They organize and have educators, interactive workshops, and performances that celebrate a sustainable approach to life.

As we march into the new millennium overwhelmed by the overpopulation crisis, pollution and the global warming crisis the U.S. must become a leading proponent in favor of renewable and nontoxic energy sources. To wait until our finite oil sources are drained of their last drops will only leave us in a more toxic environment. It was a pleasure to see individuals showing new approaches for sustainable living. Their simple logic rang true. Adapting to a positive change seems only reasonable to protect our future generations. 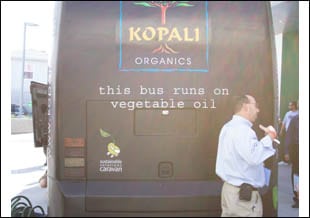