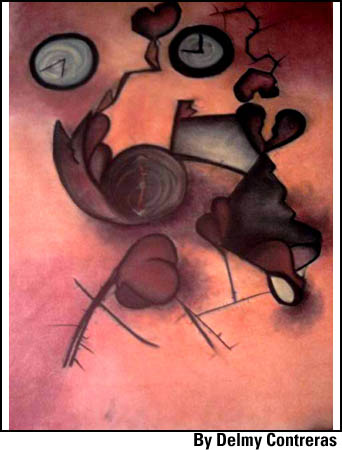 Who Can You Trust?: Punklightenment, March 2012

Having heard the repulsive news that a teacher was recently arrested for the most repulsive lewd acts against children, I felt nauseated, and thought to myself, “There is no way that would have happened to me when I was a kid!” Just in case you didn’t know, (former) teacher Mark Berndt, an elementary schoolteacher here in southern California for over thirty years, was recently arrested for tricking dozens of young children into eating his semen. This repugnant monster would tell the children they were playing some sort of game wherein he would blindfold them and have them eat cookies smeared with semen, or he would just feed it to them on a spoon.

The abominable man would also put a large, live cockroach into the mouths of some of his innocent victims as he photographed it all. Thank goodness this reprobate has been caught and will get exactly what he deserves, but this horrific scenario begs the question: “Isn’t it just plain common sense not to let anyone blindfold you and put things in your mouth?” If parents and other caregivers do not teach children to trust their instincts and to think critically about the world around them, they are creating perfect victims. I am not saying that the parents of the victims are to blame, but I am certain that if more parents carefully discussed the dangers of the world with their children, and allowed certain childhood illusions to be wiped away at the appropriate age, then monsters like Berndt would have a much more difficult time finding victims.

Children are naturally naïve and trusting, but when parents shelter their children too much for any reason, they take away the kitten’s claws and restrict the kid’s ability to think things through, or to even trust, their instincts. I decided to conduct an experiment. With parental presence and permission, I asked two young students here at my tutoring center if they wanted to play a game. The parents stepped back out of sight so they could judge and monitor their child’s response. The two boys I asked thought their parents were out of the room. In actuality, they were standing in the hallway watching and listening.

I individually asked two boys, both third graders, and both eight years old, if they would let me blindfold them and then they try to guess what was being put in their mouths. In both cases, both boys looked at me with a strong scowl of disdain, and immediately said a resounding, “NO!” After assuring them both that “no” was the correct answer, I asked them “Why not?” The first boy said, “You might put something bad in my mouth.” The second boy said, “You might put a bug in my mouth.” There it is… even though I knew these kids for a long time and had established trust, they immediately knew it was stupid to allow someone to do such a thing. They had common sense. Hell, I remember when I was a kid and whenever someone said, “Close your eyes and open your mouth,” it was a set-up… and it still is.

Both sets of parents confirmed that they encouraged their children to think about things before doing them, but more than that, they actively encouraged critical thinking. One of the boys was a special education student with the intellect of a four year old and even he still got it right. This boy’s grandfather explained to me that they always tell him to think about why something is happening, how things work, and to always think smart. These young boys’ primary caregivers were giving them the most effective deterrent to becoming a future victim: Their own minds and ability to reason.

As the owner of a small tutoring center, I often see young people with absolutely no intellectual curiosity whatsoever. A frightening number of young people, mostly adolescents, are perfectly content to consume, play, and daydream without making any attempt to learn or explore the world around them. Whenever this happens, I always ask, “At what point in your life did you stop asking, ‘Why?’ When did you stop wondering, ‘What is that? How does it work?’” One teenage boy, years ago, replied that he had already learned enough, and I responded: “Then it is time to die. If you are done learning, then you are done living.”

Today, years later, that kid is a meth addict thief with a fourth grade vocabulary and the math skills of a third grader. I tried, but you can’t save them all. One thing we can do is teach them to save themselves. All parents and caregivers should empower their kids by teaching them common sense. Despite its name, common sense has to be learned. Children are information sponges, so if the seeds of knowledge are planted early, wisdom is more likely to take root, and not only will it lead to a more fulfilling life, it may even save that life.

I remember when I was in third grade, I was spending the night at a friend’s house and I woke up to discover my friend’s dad was fondling me. I had no idea what was going on, but I knew immediately I did not like it. I did not start crying, I did not ask what he was doing, or freeze up. I ran out of the house and went straight home and went back to sleep. Kids tend to live in the moment, so I just forgot about it until I casually mentioned it to my mom a couple of weeks later. She explained to me that I was not in trouble, and to tell her everything that happened. The next day, all the kids in the neighborhood were forbidden to go over there and one kid even told the man’s son that his dad was a child molester. It was so sad to see my friend start crying and go back into the house. They moved away a couple of days later, and that scum somehow evaded arrest.

How did I know to run away? My parents and grandparents taught me common sense and to trust my instincts at an early age. Critical thinking should also be taught at school, because simple rote memorization of facts does not foster deeper thinking. It often dissuades children from wanting to learn because simple memorization is boring and does not bring the subject matter to life. A good teacher is one who motivates and inspires the student to crave to know more and to think about what they already know at a deeper level. The whole purpose of teaching is to empower the student to successfully navigate the dangerous and confusing world that awaits them in the future.

Last December, one of my young students confided in me that he was angry because his parents lied to him. He told me that he figured out there was no Santa Claus and he felt betrayed. This second grader wanted to know why someone he trusted would trick him and he wondered if he could trust his own parents about other things. I assured him that his parents could be trusted, that belief in Santa was part of growing up, and learning that Santa is really your parents is also part of growing up.

“Santa is real; it’s your mom, your dad, and one day it will be you!” At this, he smiled as he accepted this explanation, thought for a moment, and asked if anyone I trusted had ever lied to me. “Yes. Someone I used to care about lied to me and it hurt me very much” I told him. “Then how do you learn to trust anyone ever again?” he asked, eyes full of wonder. I had to think for a long time for an age-appropriate answer. I replied, “I learned that time makes things hurt less and to be more careful about whom I trust… and when someone I love lies to me, I just have to remember that nobody is perfect and good people sometimes make bad mistakes.”

“Is that what they mean when people say, “time heals?” the boy asked.

“Yes, that is exactly what they mean… and always remember, being smart makes life more fun and gives you power to keep trying even when living gets hard and you want to give up.”