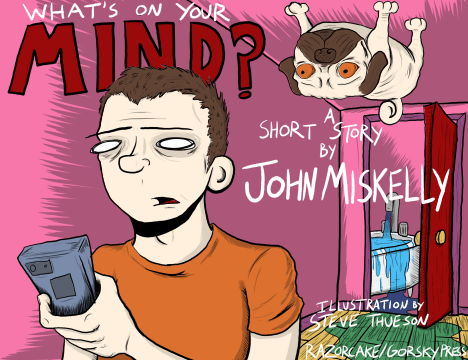 What’s On Your Mind?: A Short Story by John Miskelly

Have you seen that bit in Trainspotting? With the baby in the cot all yellow and bloated and lifeless, like a slug when it rains? Then crawling across the roof? The effects weren’t all that great back then so it kind of moved like a robot in an old museum exhibit. It would probably be CGI in the re-mastered version. Ewan McGregor wouldn’t be, though. Ewan McGregor did a great job just as his ordinary analog self and he’s deservedly commended for that.

But do you remember the bit with the baby? Well, no matter if not because it wasn’t like that at all, firstly because I wasn’t on drugs. I emphasized that to the police immediately afterwards and to the judge at the Magistrates Court. “I was not on drugs,” I kept saying. Also my brother’s house is dead nice and not a heroin squat in Edinburgh. My brother’s house is a maisonette in Brighton.

I didn’t do it on purpose, either, which is also important. I didn’t mean to hurt anyone. My brother, dad, and sister-in-law did, though, when they found Antonio and went for me. They were deliberately trying to inflict pain on me with their fists and feet and Dad’s stick. My transgression was an honest mistake while their intentions were entirely malicious. There was only one act of violence on that day and it wasn’t committed by me. 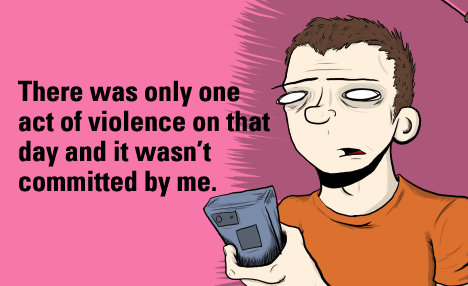 Also, it only happened because I was doing my brother and Lisa a favor. They were at Ikea with Dad and needed me to feed, dress, and generally keep an eye on Antonio for a few hours or so. They were getting a new table. They already have two tables so, again: not my fault. Also, a few hours to buy a table is an unreasonable amount of time to buy a table. Ikea is only a half hour away and there’re only so many tables in the Ikea range; I know because I got the civil defence lawyer to check.

I’d already posted a couple of things online that morning—one retweet, one original tweet, and a Facebook status update, if I recall correctly. The tweet was getting a fair bit of attention—which I think was justified—as I believe it was one of my best. It was a reference to Miley Cyrus twerking, news concerning which had peaked some time ago, so my narrative angle was a kind of ironic pop-cultural tardiness, of being way out of the loop, like; “Wait? This isn’t news anymore? 😉 ;)” People really liked it so my phone was chirping and chiming all morning.

I’d never put a coat on an angry dog before either (actually that’s the other way it isn’t like Trainspotting, Antonio being a dog and not a baby.) If they’d shown me how to do that, I wouldn’t have had to go online and look at videos on Youtube and check WikiHow. It took me a while to find one, then it sort of popped into my head that I should probably be documenting what I was doing just because of the kitschy lameness of it all. So I snapped a photo on my phone and spent a good few minutes thinking of a comment to go with it that would get across the humor of the situation but with just the right level of detached aloofness. The trouble was I couldn’t guarantee that it wasn’t cruelty to animals, which is a whole big thing right now. Eventually I gave up. Sometimes you just need to know when an idea hasn’t got legs. I emphasized this fact at the trial and to the police too; I did not exploit Antonio and I was not on drugs.

(It’s also not my fault my brother’s “firing blanks” (that’s what he calls it when he’s trying to be brave but open about it to his mates or strangers he meets in the pub when he’s half cut), which is the only reason he and Lisa got Antonio in the first place, and why they treated him like a real person, like dressing him up in clothes and taking him on holiday and buying him presents at Christmas.)

Anyway, during this whole time I was researching coats and authoring the tweet that I eventually didn’t even post, Antonio had walked across the kitchen countertop to the stove where I was boiling water for some noodles. Long story short, he ends up on the kitchen floor covered in boiling water and barking his bloody head off. Personally, I think I deserved a bit of credit for acting reasonably quickly even though Antonio was barking so hard I could barely hear myself think.

Also, within seconds of Antonio covering himself in boiling water—himself I’d like to emphasize—his skin had gone all purple and pink and shiny like the film you sometimes get on top of custard or hot chocolate, yet I still picked him up, even though he looked gross, and rushed him upstairs to the bath. I tried to take his coat off, but when I did a whole load of fur and skin came with it, which was even grosser and made Antonio whine at an even higher pitch.

Eventually, I got him and the stupid coat under the cold tap and he continued to scream his diminutive little head off. I thought I should probably phone a vet or the RSPCA or something, as the pink blotches really did look quite gross—as in, like, medical gross. Well I’ve only got two bloody hands, so I could hardly do that while I was holding Antonio under the tap! So what I did was I put the plug in the plughole and placed Antonio down over the top of it, so the water was kind of gathering around him and splashing all over him.

But he was wriggling and sliding around so much, trying to get some kind of grip on the wet enamel with his paws that I was forced to go into the spare room where the really heavy pot plant is and sort of pin him down with it. He really didn’t like that, barking and whining like rusty train brakes, but it held him in place while I left the bathroom to phone a vet or the RSPCA or whoever. I mean, I’m not risking getting my iPhone wet after I queued all night to get the bastard thing.

Before I search for a veterinarian’s number, there’re all these alerts about my inspired Miley Cyrus tweet, but also a Buzzfeed news alert about all ten series of Friends finally being released on Netflix. Well, I’m not fucking missing out on this. I need to be part of this conversation and I need to get something out there pronto, so I smash out a tweet referencing something to do with Ross and Rachel taking so long to get together. I include a subtle reference to a very particular episode of an early series, which requires a quick fact-checking visit to IMDB, and I suppose it was during those moments that I lost track of time.

It wasn’t until I’d published the tweet that I became aware of the lack of noise coming from the bathroom. Antonio wasn’t whining anymore, which was odd what with the boiling water and the custardy skin marks. So I went back into the bathroom and not only was Antonio not crying anymore, he also wasn’t moving. In fact, he wasn’t doing anything except floating. So was the bloody pot plant, on its side, making the bath water all muddy and brown—a right fucking mess basically.

(Once I saw a dead cat in a river. Its fur was all scraggly and matted and there were clogs of earth and flotsam stuck to it. It had a large gash on its head and I could see the white of its skull where the river water had cleaned the blood and skin away. Some other people were standing on the riverbank a few yards away in some state of obvious distress; holding their hands up to their faces and pointing and shaking their heads and such like. I didn’t feel distressed but I did feel frustrated. I wanted to get closer to the cat and look more closely at that gash on its head and inspect the area where the skull met the flesh, and the general hue of the skin, and just... look at it. I wanted to follow it downstream, witness its journey to the sea. How much more could the body decompose in that time? Would it be nibbled on by fish or larger amphibious mammals? Stuff like that.)

Antonio didn’t look as bad as the cat. He didn’t even look that sad; if I’m honest, just sort of blank. I picked him up and held him at arm’s length and stared at his muddy little body for a long time, so long, in fact, that I only realized I was even doing it when I heard the crunch of car tires on the driveway. That’s when I knew I was in the shit.

Everything after that I think you know about. I didn’t go to prison—I don’t think you can for that kind of thing. The judge made me go for some psychological evaluation which was pretty easy going. They also tried to ban me from using social media; said it had effected my moral judgement and “sense of time and place.” Impossible to enforce of course; I mean it’s a human right in Finland, the internet. Did you know that? 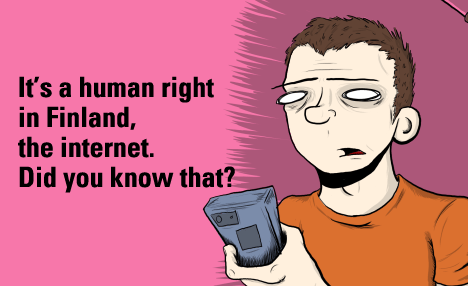 John Miskelly is twenty-nine years old, unemployed and technically homeless, but not in a cool Bukowski way, just in a really lame, burned-out prick kind of way. A collection of his short stories can be found on this website. He blogs even irregularlier than usual at www.protagonistcomplex.blogspot.com