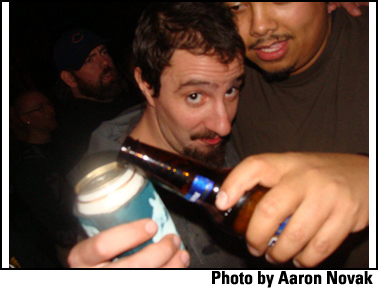 What a Difference Five Hundred Dollars in Alcohol Purchases Can Make: By R. Helly

The closest liquor store to my apartment has a “preferred shopper card.” I’d say it’s more of a “frequent boozer program.” Anyways, I got one last August after we first moved in. It’s basically like a King Soopers/Safeway card that they scan every time you make a purchase. You get the sale price on items, but more importantly you earn store credit. It’s not that great of a deal, but it’s better than nothing. For every five hundred dollars you spend (not counting sale items or tobacco products), you get twenty dollars in free booze that you can cash in whenever you want to, or in some cases, need to. My last receipt showed I was at $480, on the verge of hitting the magic number for the second time since I’ve lived here.

I decided this is as good an occasion as any to take stock of my life and reflect on how much has changed since the last time I hit the glorious five hundred dollar mark.
I don’t remember what the date was the first time I hit it. I’d guess it was January or February of this year. I was working a terrible job at a Volkswagen dealership in Aurora, Colorado the crappy, soulless suburb of Denver that where I grew up. My roommate who got me the job had long since been fired, so not having him around at work made it that much lousier. I could barely relate to the rest of the people who worked there. Most of them were nice enough guys, but I had little in common with them. These guys were your stereotypical American males: big trucks, suburban houses, internet porn and heart attacks. I didn’t give a shit about cars, football, television, hunting, the radio, or ninety percent of what was discussed during work hours. I did, however, enjoy our daily discussions about fast food, as dollar menus were (and remain) near and dear to my heart.

My job was to deliver auto parts, as needed, to the greater metro area, which wasn’t so bad except for the fact that we were entirely overstaffed for the amount of business that we did. This meant either getting sent home early or finding the slowest route to get anywhere; generally milking the clock as much as possible with hopes of making rent. The rare busy days were nice. I’d cruise around blasting new CDs I’d burned or listening to quality NPR programs, stop for some Del Taco, deliver a few more bumper covers, and call it a day. Most days were not busy and consisted of multiple fast food runs for co-workers, driving the aforementioned longest routes possible, and sitting on a stool looking at the backs of peoples’ heads waiting for something to do. If I was lucky enough to work seven hours, it felt like twelve.

I was constantly broke. This job paid the same meager wage that my last job in Ft.Collins did, however, living in Denver costs me a lot more than living in Ft.Collins. My rent is higher, I have car payments and car insurance payments to make, and, generally, higher prices for everything. It’s not fucking New York City, but stuff costs a bit more than in the college town I was so used to. So yeah, broke. Here I was, finally living in the big city, but spending all my time driving through the suburbs and never being able to afford to do anything fun.

Whatever weekend it was, I think I scraped up a couple bucks to buy tallboys in order to get over the five hundred dollar mark to get some real booze. I cashed in my credit on a handle of Evan Williams and spent the weekend getting drunk on whiskey gingers on the couch with my equally broke roommate.

What a difference five hundred dollars in alcohol purchases can make.

It’s now October, and while I am drinking beer on the same couch, so much has changed for the better. One of my new year’s resolutions was to get a better job, and unlike my other two resolutions—drink a beer in every shower I take, and have seventy percent of my bowel movements on the clock—I’ve succeeded in this one. I spent most of the year looking on craigslist, e-mailing out resumes, and going to interviews from time to time. Finally in August everything clicked. I landed a job at Growers Organic, a small produce distribution company.

This is by far the coolest company I’ve ever worked for. My co-workers are mostly around my age and are quickly becoming my friends. These people are interested in literature, bicycles, leftist politics, and music. Actual music. I’ve already turned a couple of them on to a lot of my favorites and they actually appreciate it. A couple of them are even going to see Deer Tick with me next week. For fuck’s sake, the owner of the company saw a Cramps patch on my backpack and made a punk mix CD for me the next Monday. It wasn’t anything I hadn’t heard before, but when the CEO is down with Bad Religion and the Dead Kennedys, you’re probably in the right place.

As for the actual work, I’m enjoying it as well. The days start early, usually at 4AM. If you’d have told me I’d ever be happy getting up at that hour I’d have laughed in your face. We clock in and start getting things going: building pallets, packing orders, auditing, etc. By about seven or eight it’s time to start making deliveries. Three days a week I’m on the Denver 1 route, which consists of the east side of town, including Capitol Hill, my neighborhood.

I spend the day delivering cases and cases of locally grown fruits and vegetables to independent grocery stores and restaurants. It’s definitely physical work, but it serves a good purpose. I can’t describe how empty it felt to drive across town to deliver a forty-five dollar “Jetta 5.0” emblem for some housewife’s trunk. I’d just think about how useless the work was that I was doing. At my last job in Ft.Collins I delivered radiators for cars. While not exactly fulfilling work, a car does need a radiator to run. A car doesn’t need these stupid cosmetic decals and emblems to function properly. It just made me more depressed thinking about how I was assisting the vanity of rich people for a living.

In addition, it feels great to actually be tired at the end of the day. On Thursdays I do the Ft.Collins route. I get to visit my old stomping grounds and usually have lunch with my friends who still live up there. On Fridays I go to Boulder, which doesn’t really mean anything to me, but it’s a demanding route and a good amount of hours. I now have Sundays and Mondays off, which is fine with me. I no longer feel trapped in the nine-to-five M-F traffic jam lifestyle. Oh, and I have health insurance for the first time since I was in school.

The company actually lied about my hire date so I was eligible for it sooner. It costs me a whopping twenty-eight dollars a month. I’m making more money, even getting some overtime, and the busy schedule makes a ten-hour day fly right by. Yeah, I’ve got to go to bed earlier, but I can finally afford to check out new bars and restaurants, and generally enjoy the city that surrounds me.

I’ve suggested new ideas that were well received and will hopefully be implemented. I’m not especially passionate about organic produce, but I am passionate about making this company work. I’ve worked enough shitty jobs for bosses I didn’t respect to know that this time I’m really on to something.

See you in another five hundred dollars in non-sale, non-tobacco purchases!