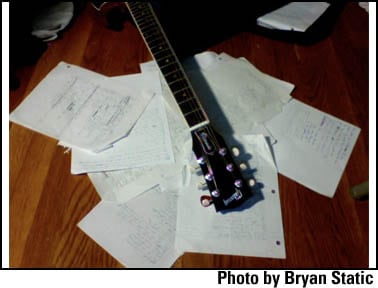 "You birds have a hundred thousand bad drawings in you; start getting rid of them now."
–Chuck Jones, paraphrasing an old art teacher he had

I’m an impulsive person. I get excited about projects that I think of before they get off the ground and my excitement leaves me as soon as I think of something better to do. Before you get all ecstatic, no, I’m not retiring my column. Jeez. What I’m talking about is how many things I start and how many I don’t finish. It’s how I intend to bookend this article. I have a process, goddammit!

In my excitement to start new things, I’ve began numerous musical projects (often times as the sole member and fan) that barely went anywhere at all. I would often write one song and then decide that it was not worth it.  I have amassed a collection of over two hundreds songs at least partially written by yours truly because of my being an attention deficit songwriter,

I view all of these songs as stepping stones to achieving the perfect song. There is a very clear and logical progression from my lowly start, to the humble um… place I am now? Hopefully it’s the middle. Though not every song is a masterpiece, I like to think I’ve learned a few things along the way and I would like to share some of my knowledge with you. Though, to be truthful, most of my knowledge involves explaining when a rhyme is in poor taste. Allow me now to present to you a brief history of my illustrious career as a songwriter.

Why is it that every time I write a column I end up mentioning my shitty old bands? Here are the facts: 1) I was in a pseudo-metal band that played a Nirvana cover. 2) The bassist in that band introduced me to a piece of software that allowed me to create electronic versions of music I wrote. 3) I had to write a “novel” for a 7th grade English project.

Before I understood concepts like conflict, dynamic characters, and plot I wrote a piece of fiction about a band. The story was an amalgamation of SLC Punk (which I had watched for the first time that year, going so far as to try to nickname my friend Stephen, Steve-O) and the video game Tony Hawk Underground. I didn’t really care much about that part of the project. However, I was excited about the fact that I could make a mix CD with all the songs I mentioned in the plot. The plot also allowed for me to write a few songs to be included. Well, it didn’t so much “allow” as it was entirely crafted around this aspect.

I wrote four songs, each one shittier than the last. For as much as I did not understand fiction, I also didn’t understand song structure. I mean, I knew about chorus, verse, bridge, etc., but I did not know or understand things like drum beats, keys, or writing songs that were physically possible to recreate. The worst part was, all four songs were written in drop D tuning, the dreaded tuning which must not be named, claimed long ago by the land of grunge, soon overtaken by the nü metal empire. Since those days, the drop D of legend has become taboo in lands across the great continent of rock.

The project went over all right, but it was never met with the teenage prodigy reaction I was hoping for. All I got as a response was an awkward smile from a teacher who never stopped smiling anyway. I have since recycled the book and have long since lost the files those songs were written on. Good riddance.

I climbed the evolutionary ladder, slowly growing my legs. The next two years were filled with attempts at political songwriting. You see, it was 2004— the year I was sure President Dubs would not be allowed back. This was the year where Rock Against Bush was released, the year after NOFX’s The War on Errorism. Obviously, all great punk songs are political. During this period, I wrote hit songs like “Hate America 101,” “Not My President,” and “We’re Youth.” Politics fueled by a reading of Michael Moore’s Dude, Where’s My Country? and the short-lived Punk Voter movement. Cliff Notes liberalism.

I was one of three students at my school to vote for Ralph Nader in the mock election.

While we’re at my middle school years, I may as well mention that I was really into silly songs. NOFX was my favorite band at the time and the Vandals were also near the top. This brings me to the single most embarrassing song I’ve ever written. What’s surprising is that it’s not either of the songs I’ve written about testicles.

The piece was entitled “My Gay Friend” and it was filled with the most clichéd stereotypes of homosexuality in an attempt to pass as humor. I remember showing it to my friends back then, hoping to get a few laughs. I just got uncomfortable stares. They were quite offended. How dare I write a song that portrayed a homosexual in a positive light? I had failed to take into account, no matter how many friends I had gotten into Bad Religion and Anti-Flag, they still grew up in south Texas. Oops. Despite how embarrassed I am about it now, I take some solace in the fact that I was at least fairly open-minded when I was younger.

I had written at least two dozen songs when I worked at a movie theatre during my sophomore year of high school (which is even more ridiculous when you learn that I only worked there for three weeks). Every day they gave us a sheet of paper with the movie times on it and, to pass the time, I wrote about a song a day. I only worked at the concession stand one time in that short period; every day after I convinced them to let me work the floor, sweeping up after the movies. I quit after having a crisis of conscious. A few weeks later, I learned from two school friends who continued working at the theatre that I fucked the system up for everyone. A week after I quit, a person from corporate came in to talk about distractions at the work place, reading off a complaint left by one customer about an unshaven bleach blonde teenager who wouldn’t stop writing on his piece of paper.

I’ve only had a non-band member ask me to write a song twice, but it was the same person. My dad was a stand up comedian in his prime and because of this I have a lot of somewhat unordinary childhood experiences, like performing stand up comedy when I was thirteen. Shame I didn’t learn humor from it.

A few years back, my dad’s friend Cleto hosted a local talk show that was broadcast live over the Internet. He had asked my dad if he’d like to do his own little segment, similar to how Lewis Black does his thing on The Daily Show. After a few attempts, my dad wanted to get a theme song for his little segment. I spent an entire afternoon recording a little surf ditty onto a computer. It was used once.

The other time my dad commissioned a song from me was for the same show. During the Christmas season he wanted to record a song called “Flat Santa” about deflated blow-up Santa Claus ornaments. I never recorded this one, but I did spend a day writing it for him only for it to never be used. I guess that’s show business.

I mentioned earlier my penchant for starting ridiculous music projects that ultimately ended after one song. Ideas like a pop punk album to teach children about science (“The Elements”), a melodic hardcore band that had albums vaguely following the plot of Shakespeare plays (“The Rest Is Silence”), and even a band that would do nothing but write songs about comic books (“I Am Batman”—think “Roadkill” by the Dickies).

It might come as a shock to some of you, and I might lose a punk point or two for saying this, but I like Green Day. I mean, not even just the first two albums, Dookie is a masterpiece and Warning is just awesome. That being said, “Good Riddance (Time of Your Life)” is a piece of shit. Hopefully that redeems me a little.) A few years back they released their image-redefining album American Idiot. Whatever your opinion of it is, you must understand that the album they released wasn’t the album that they were going to release.

Cigarettes and Valentines was the tentative title of Green Day’s seventh album. It was supposed to be a return to the stylings of their older album, Insomniac. Near the end of the recording process, the master tapes were stolen. The band decided to write a completely new album instead of wasting the effort to re-record songs that they felt would have just gone to waste on an album most people would just dismiss. From that decision came American Idiot.

I decided to take it upon myself to “discover” this missing album. I was going to write, record, and spread it around file sharing sites to see how many people would take the bait. I wrote one song, the title track, and then decided my impression of Billie Joe wasn’t good enough. I never touched the idea again.

In an odd coincidence, while writing this article, Green Day has let a video for “Cigarettes and Valentines” leak. I think I like the one I wrote better.

One song that I really wish had found a home, but never did, was called “Shit Happens.” It was the epic finale to the Shit Trilogy. It all began with Dan Padilla’s hit song “Shit’s Tight” and was continued with the Copyrights’ “Shit’s Fucked.” I figured the logical extreme was to make a song that existed on the spectrum between tight and fucked. Though in hindsight, it would probably fit with the other two better if its title was more along the lines of “Shit’s Happening.”

And here we are now. Two hundred songs later, and at least I’ve learned that rhyming things with curse words very rarely works. That counts for something, right? Oh, whatever. You’re probably still making fun of me for liking Green Day. And look! I finished this article! See? I told you I would bookend it this way. That’s what you call foreshadowing, my friends.