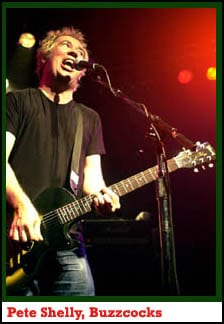 "Slappy, there is a rock and roll juggernaut headed your way soon. Holy crap!! Not only did The Dragons rock but the Gamblers are on top of their game. They even did a cover of "Fun, Fun, Fun"! Don't miss this show!"-Mikey Wallace Dallas, TX

This was the message I had on my voice mail Friday night. I didn't need the heads up since I had been waiting for this show for over a month. But it was cool to get psyched even more for it. The Dragons and Riverboat Gamblers show was the start of my week of rock. Four shows from Monday through Saturday. Two in St. Louis and two in Chicago.

The Dragons/Gamblers show was at the Rocket Bar, a place known to some as the "secret emo cave" due to the crowd that normally hangs out there on the weekends. It isn't the place one would expect to see the Dragons. But both the Dragons and Gamblers put the "rock" in Rocket Bar. Opening the show was The Unmutals. They play a solid punk rock/garage style that leans towards songwriting ability, not trying to ape The Strokes.

Up next came the Riverboat Gamblers. I saw them once before in St. Louis and thought they rocked. But man, have they really put it together now. I guess they had been on the road for a few weeks and it showed. Super tight and energetic. The singer mentioned being taken to the East Side strip bars the last time they were in town. Then later it seemed like he was stealing some moves he learned across the river as he put a bar stool on stage and danced on top of it. He was all over the floor, in front of the stage, and on top of the pin ball machines. They tore through their set like it was Friday night and they had a packed house. Instead, it was Monday with maybe fifty people in the room. (Way to go STL.) The Dragons hit the stage next and proved to me once again that they are indeed one of the best live bands I have ever seen. They don't stop at all. It's just unrelenting energy that they throw out at the crowd. It must be what a blade of grass feels like as the mower takes it down to the ground. The Dragons don't have a bad song. Even if they did, it would still kick the ass of most bands' best songs.

Tuesday, there was no rock unless you count band practice. I don't. Nor do I count having to spend all day getting all the inspections and paying even more taxes on my car. The one thing that ate at my brain all day was the giant sign telling me that the emission test I was waiting to pay twenty-four dollars for was mandated by the EPA as delegated by the US Congress. Huh? I'm fairly certain that the US Constitution prohibits Congress from delegating its authority. Just something to think about while you stand in a little glass and concrete room while some kid revs your car up to about 10,000 RPM's. Super.

Back to the rock on Wednesday. More accurately the hardcore. Black Cross are from Louisville, KY. I was turned on to them by a friend who knows them. He had a copy of their new record that totally blew me away. For one, it sounds like hardcore and not weak-ass metal. Second, the singer from time to time sounds like Vic Bondi. One of my all-time favorite singers. The music, while hardcore, still has moments that remind me of Hot Snakes or Drive Like Jehu. Very cool stuff. So after listening to the record for weeks, I had to see them live. They played the Creepy Crawl where I hang out more than any place in St. Louis. I got to the show right when The Bled were about to play. I don't remember where they were from, but I hope they go back and stay there. The drummer was good but overall they did that whole screamy, sort of chunka-chunka thing that makes me want to drop cases of Cro Mags records on them until they're dead.

Black Cross hit the stage and played all the songs I had been cranking in my car for the last month or so. They are very energetic on stage, as you would expect a hardcore band to be. Well, I expect it anyway. But even their stage presence was more hardcore than cliched posturing made popular by guys in sweat suits. The set was maybe thirty minutes and it blew me away. Thank goodness someone is still playing real hardcore.

Thursday was a travel day. I flew to Chicago to get ready for the end of the week of rock. Friday night was Buzzcocks at the Metro. Saturday night Rollins Band with Keith Morris playing Black Flag songs. Two must-not-miss shows for me.

Chicago is known as the Windy City. On this trip I dubbed it "the land that summer forgot." I refuse to wear jeans and a jacket in June.

The Buzzcocks show was pretty late. Doors were at nine. We managed to miss the first band as I waited for my friend to get searched in the girls' line. The second band was Billy Talent. I will not go for the obvious slam on these guys with their name. I guess they mean no harm, like that guy asking me for change on the street corner. I could not at first figure out what they were doing. It was music. There was a guitar, bass, drums and a singer. But what was it? It was that lame. I finally decided that they had listened to a lot of Sum 41 or something equally tame and decided to start a band. This is totally not music related - the guitar player had this crazy Herman Munster rockabilly haircut going, but he was wearing bell bottoms. Now I have seen this in STL on one other dude. He has a pompafro, to boot. And wears a bondage belt with bell bottoms. Come on! Some people are lucky I don't drink, because this lack of style calls for a beat down with bottles, chairs and fists.

From violent thoughts to Buzzcocks. First, I love the new record. I was shocked to find that it didn't suck. The last one was just awful but now they seemed to have tapped that Different Kind of Tension well and have come up with catchy songs that will not leave my head. And a CD that has not left my changer in over a month. 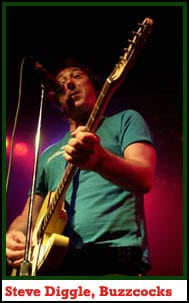 The Buzzcocks took half an hour to come out on stage. I had staked out my spot on the floor at stage right, like I always do at the Metro. This place is always smaller than I remember it, for some reason. The crowd was made up of a lot of kids but even more people older than me, for once. I think I even saw a group of girls there with their dad who I later saw up front. The Buzzcocks started off with several older songs before throwing in some new ones. This got the crowd moving almost immediately. The thing I love most about seeing the Buzzcocks live is that Pete Shelley looks bored stiff, for the most part, and Steve Diggle never stops smiling. He looks not only happy, but beyond pleased that he is up there playing guitar. Then, between songs, you will catch Pete watching Steve having fun and sort of laughing to himself. After most of the set I couldn't stay to the side any longer. I had to get in the front. I knew that "I Believe" had to be coming up soon and I love to sing along to that song up front. There is nothing as therapeutic as yelling "there is no love in this world anymore" at the top of your lungs.

It was Saturday night and I had one more show left. I have seen Black Flag seven times. The last time was in St. Louis in May of 1986. It was kind of bleak at that show. You could tell it was over, to say the least. Over the years, everyone has covered all kinds of bands but I never hear a Black Flag cover. It's always the Misfits. If you're in a band and you think you might want to cover the Misfits, do me a favor and break up. Or do a Flag song. One or the other.

Anyway, I was stoked to see Henry and Keith sing Black Flag songs even if it was The Rollins Band playing them. I missed the first few songs of Keith singing since I had to wait for my friend to get ready and it was Puerto Rican day. No one could tell me what it was about, either. No one seems to know what the holiday is about. I decided while waiting in traffic that it was to celebrate the arrival of the first automobile on the island. So they celebrate by driving in circles waving flags. Or maybe they are just glad to be in Chicago and not Puerto Rico. Who knows? All I know is I was bumming about the traffic.

Once I made it inside, I made my way to the front. I decided that since I was always in the pit for Flag, I wasn't going to let seventeen years keep me out. Most of the people up front were as old, if not older than, me. But it was still pretty rough. I saw Keith finish out his set of ten songs which ended with "Gimme, Gimme, Gimme." Then he walked off stage right as Henry bounded onto the stage from the left. He picked up the microphone and they launched right away into "Rise Above." It was a blur after that. Just one great song after another. Henry did stop to comment before they played "Damaged" that the first time he played that song there twenty years ago, the crowd dragged him from the stage and tried to kill him. No one was getting close on that night. What, with the barricade and four bouncers between him and the crowd. Although one knuckle-head did touch Henry, who told him to keep his hands off. My, my, so touchy. The odd thing about Henry was that he was wearing black jeans, black T-shirt and black high-top Vans. It was halfway through the set before I noticed it. I wonder why he did that. I wonder if it is about capturing that first time he sang with Flag. Who knows? I did get the impression from some comments that he made between songs that he respects the work of Greg and especially Chuck. But why didn't they play "The Bars?" Why did they end the set with Ramones covers? That was it for me. I was out of the front and looking for my friend. I was there to see Black Flag covers not Ramones songs. All in all The Rollins Band should just stick with the Flag songs and forget that mess they play now.