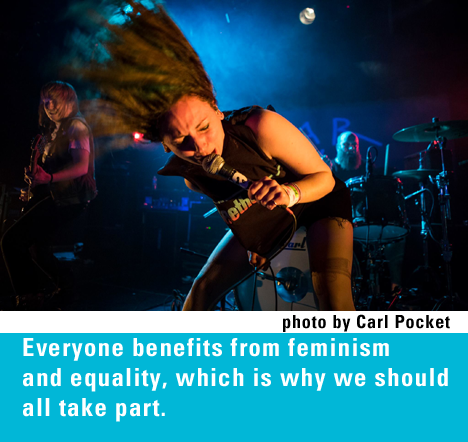 War On Women: An Interview with Shawna Potter by J.J. Anselmi

War On Women, a Baltimore based, co-ed feminist hardcore outfit, is political in the best ways. Fronted by Shawna Potter, the band is sonically and lyrically confrontational. In the midst of fast-as-fuck punk riffs, discordant post-hardcore, and nasty breakdowns, Potter yells about street harassment, misogyny, and the slippery nature of gender identity. Imagine an aural collision of Cursed, Bikini Kill, and Bad Brains. Or just buy War on Women’s debut EP, aptly titled Improvised Weapons.

Go to any hardcore or metal show and you’ll mostly see white dudes—a fact that steers a lot of people away from these genres. But this context also entails the possibility to fuck with people in meaningful ways, which is exactly what War On Women does. I recently saw them play in Fresno, and they destroyed. Luckily, Shawna Potter was cool enough to answer some of my fan-boy questions a few weeks after the show.

Listen to War On Women here.

JJ: I think it’s rad that War On Women is a co-ed feminist band, but have you gotten any flack for having dudes in the band?

Shawna: No, not at all. It’s not really mentioned. Almost to a weird degree, like, “Hey, there’s ladies in this band!” and the dudes are ignored.

JJ: How do you see male involvement in feminism as a whole? Is it a good thing?

Shawna: It’s good and necessary, in the sense that everyone benefits from feminism and equality, which is why we should all take part.

JJ: It’s no secret that hardcore is dominated by white dudes. Can you talk about some reactions you’ve seen to your lyrics and music from hardcore guys?

Shawna: Well on the most recent tour we did—hitting the West Coast supporting Propagandhi—we certainly experienced some everyday sexism. The reactions we can see or hear at shows are never actually in response to our lyrics or message. It’s “Hey, I like your ass,” yelled at us over and over. Or other lame things like that. In Baltimore, friends of hers will tell Nancy, one of our guitar players, that we’re too angry. This coming from straight white hardcore dudes who love it when men scream at them. Just fuel for the fire, though. If they really hate my band that much, they should end gender-based violence and discrimination so we’d have nothing to sing about.

JJ: How was the tour with Propagandhi as a whole?

Shawna: Oh, it was great. Really responsive crowds, people showing up early to sing along. It was awesome. And we love those crazy Canadians, so it was super fun to be out with them again.

Shawna: Yes and no. We love to play, so that means poorly attended benefit shows, DIY basements, as well as the larger venues we did in Europe, and then on the West Coast. We’ve also all been in bands for years, all with different “success” levels.

I do think we work well with large crowds because we move around and put on a show, but if five people are rocking the fuck out in a tiny basement, we put on the same show. We want everyone to have a good time.

JJ: How did you get into hardcore?

Shawna: Oh, I have no punk cred in the traditional sense. Let me just be up front about that now. I like all kinds of stuff, which means I know a little about a lot of things. I enjoy Propagandhi (duh), the Slits, Refused, Danzig... I mean my favorite shit right now is Robyn. 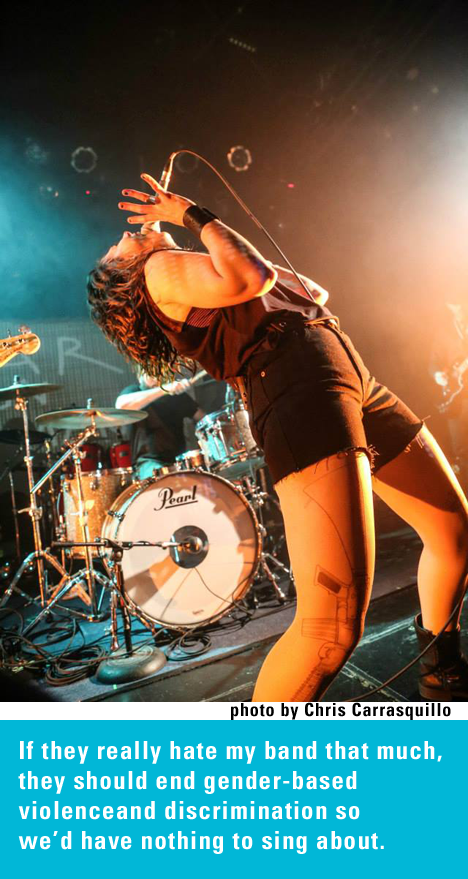 JJ: And who are some of your favorite vocalists?

Shawna: My favorite vocalists will always be Michael Jackson and Prince. I’ve always liked anything a little swaggery, and heavy and I feel our style of playing makes a lot of sense for the real, true anger that comes from dealing with the shit I scream about. I should also say that every other person in the band could have answered that more straightforwardly. They’re all into hardcore, punk, and metal way deeper than me. I like a little of a lot of genres, if that makes sense. And I’m cheap! If I know it will get played in the van, I don’t have to buy my own copy.

JJ: When I saw you in Fresno, one of my favorite moments of the show was when you played “Broken Record” (a song where Shawna mimics the shit guys say to women on the street). While you sang/spoke, you focused on one guy in particular, and he quickly became uncomfortable. Do you usually do this when you play the song? If so, why?

Shawna: I try to. There’s certainly an element of autopilot when we’re playing, so I’m not really sure of what I’m doing, and I have no plan for what I’ll do. But yeah, I like doing that. If I singled out a woman, what would be the point? She might get triggered, she probably deals with street harassment all the time, and it would reinforce our idea of what is normal behavior in public.

Suddenly you see me yell at one guy specifically—all the things that have actually been said to me or my friends, unrelenting—and you start to actually get the picture of what the street harassment experience is really like to a lot of folks. They don’t always get uncomfortable, though. If they know the band, it can be really fun. And sometimes I try to make sure that I don’t have any actual beef with the guy. I mean, I try to make sure he knows I don’t have any issues with him, like after the show. But sometimes it’s better to not make a point of clearing the air, better for the overall delivery of the message.

JJ: For sure. That shit was amazing.

JJ: I felt a little uncomfortable with/for the guy, but in a productive way. I knew right away what you were doing, and I love subversive shit like that.

JJ: Hardcore should be confrontational.

Shawna: Yeah, what’s more punk than upsetting and addressing the status quo? What is more normal than sexism?

JJ: Hollaback! Baltimore seems like it tries to do similar things. What is the organization and how are you involved?

Shawna: It’s a worldwide network consisting of local chapters that works towards ending street harassment. I run the Baltimore chapter, but it’s based out of NYC, with over seventy chapters all over the globe. It’s really cool to work in my community, addressing specific needs, raising awareness, giving people options for how to deal with and respond to street harassment, and all that fun activist stuff.

JJ: “Effemimania” and your other songs have some pretty heady concepts. What writers and theorists have influenced you?

Shawna: That song is right out of Julia Serano’s Whipping Girl. Being an ally to the trans and queer communities is really important to me and the band, and I found that book really informative. I think books like that help dismantle bullshit sexist double standards. You know, that either/or mentality.

JJ: Gender theory writing can be super dry, but you present these ideas in accessible ways. How do you go about translating academic ideas into something people can actually digest?

Shawna: Oh, do I? Some things seem so obvious if you’ve lived them. I don’t have the privilege of not thinking about it, so after awhile, hopefully I can share some tidbits to help you swallow the scary idea that we go through shit you don’t, and maybe you should listen to us about it.

Shawna: Well, it’s just the biological fact that those body parts were once the same body part, and they change depending on how your parents’ cells shake out. And, really, that they are not so different that we should discriminate based on them.

JJ: Nicely put. I only have two more, and they’re easier. I know next to nothing about Baltimore. What’s the scene like?

Shawna: It’s alive, it’s exciting. Tons of bands, different genres. It’s not a rare thing that you have to choose between three shows to attend every weekend night. It could always use more women and people of color, of course! But that’s a bigger, more systemic issue, not a problem specific to Baltimore.

JJ: What’s the next move for War on Women?

Shawna: Putting out a new record! We’re currently working on new stuff and looking to release it this year, so if Columbia calls, give them my number, would you?