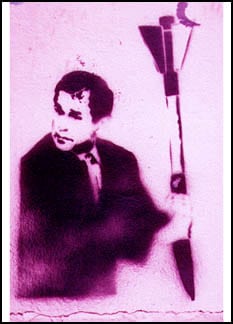 President George Bush Jr. is not on the ballot this election, but this is still a great chance to vote down his administration. Bush’s Republican allies now hold majorities in both houses of Congress. That gives them control of congressional committees that write laws and also decide what to investigate—or what to ignore. For nearly six years, Bush’s enablers on Capitol Hill have rubber-stamped the president’s legislation and buried his scandals. With all members of the House of Representatives and one-third of Senators up for re-election, it’s time to remove that prop of Jet-Boy George’s power.

The GOP record was horrible even before the self-described moralists of the House Republican leadership got caught covering up for a colleague who spent his time hitting on boys. The list of Republican lies and failures could fill volumes, so let’s just look at two areas: the economy and the war in Iraq. By any reasonable standard, Bush Jr.’s economic record ranks him among the worst presidents in U.S. history. Since he took office, the national debt has ballooned from $5.8 trillion to a record $8.5 trillion, mostly due to war spending and tax cuts for the rich. (For comparison, the debt accumulated by the thirty-nine presidents before Reagan was about $1 trillion.) The president said that his tax cuts would create an economic boom and they did—for those who were already wealthy. On the other hand, the poverty rate is up, consumer debt is up, and the rate of job creation is worse under Bush Jr. than under any other president since the Great Depression.

As for Iraq, here is a quiz. Which of these statements are true?

“There is no doubt that Saddam Hussein now has weapons of mass destruction.” – Vice President Dick Cheney, August 26, 2002

“We know where they [weapons of mass destruction] are. They’re in the area around Tikrit and Baghdad and east, west, south, and north somewhat.” –Defense Secretary Donald Rumsfeld, March 30, 2003.

“We found the weapons of mass destruction. We found biological [weapons] laboratories.” – Bush, May 29, 2003

“There’s overwhelming evidence that there was a connection between al-Qaeda and the Iraqi government.” – Cheney, January 22, 2004

The answer, of course, is “None” and likewise this 2005 prediction by the vice president looks more ridiculous every day: “The level of activity that we see today from a military standpoint, I think, will clearly decline. I think they're in the last throes, if you will, of the insurgency.”

The Democratic Party has many flaws, but Bill Clinton never lied us into a major war and then spent three and a half years fantasizing that we were winning. Democratic leaders have promised to counterattack the elitist Bush-Cheney agenda (by rolling back the president’s tax cuts for the richest 1% of Americans, for instance) and to make King George a “lame duck.” Even if they fail to fight the administration as hard as they should (see Bush Jr.’s first term for examples of that), we still need to cut the puppet strings that connect Capitol Hill to Vice President Cheney’s office.

Historically, elections in the middle of a president’s second term are bad for the party that controls the White House. The polls indicate that the Republicans are in serious danger of losing control of Congress but, as always, turnout is the key. Only about 25% of eligible voters bother to vote in mid-term elections, compared to around 50% in presidential elections, so each vote carries that much more weight. Punkvoter and other organizations did a great job of registering and organizing new voters in 2004. We didn’t beat Bush Jr. that year, but we can now.

For more information, check out these sites: