Most foreigners don’t go to downtown Guatemala City. The guidebooks say it is dangerous. I think it is fascinating. I can hear people talking in the country’s twenty or so Mayan languages as I walk between crumbling buildings from the turn of the century and storefronts that haven’t changed since the ’60s. I smell food rich in chiles, cinnamon, and sesame mixing with the diesel exhaust. It is also where the punk shows often happen.

But today the streets are nearly empty, except for the sheets of rain from tropical storm Agatha. As I pass Sexta Avenida, the place to go for all kinds of cheap stuff, the usual multitudes are gone. A few brave vendors watch over their plastic-covered stands. Where I’m from, a tropical storm doesn’t mean much because we live in houses built to code and we spend most of our lives indoors. Here it will mean that nearly two hundred people will die and 65,000 will lose their homes.

A rain-streaked white piece of paper that says “Toke Punk” marks the venue, which looks like it was an art gallery in another life. I park my car behind a line of cars in a red zone – no worries today because the traffic police are still busy mopping up the volcanic cinders that fell earlier this week.

“Pase adelante,” says the kid in the hoodie. I have paid my ten Quetzales (about $1.50) and I make my way up the dark stairway. I don’t know exactly what is waiting for me at the top of the stairs but I know it is something good. It’s a feeling I have had many times before, like when I slit the cellophane on a new record that I bought because the cover looked kind of cool. 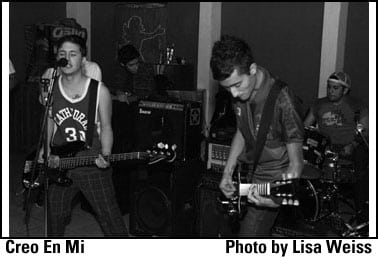 The time on the flier said two PM, but I made sure to get here after four PM, which is right on time – punk rock standard time plus hora chapina (Guatemalan time). The first band is getting ready to start. They are Volver [Return]. I don’t like comparing bands to other bands and I agree with Frank Zappa that “writing about music is like dancing about architecture,” but I will say that their music is complex and full of tension. They sound like they’re sitting in a basement in Washington, D.C. with my friends, drinking something bitter and creating a new religion.

I look around and I notice that I am probably the only girl who is not here with a member of one of the bands. In addition, I don’t really know anyone here. I fidget with my camera so I don’t feel like a total dork.

Next up is Despertar [Wake Up]. Their music is heavier and it reminds me of the thoughts I have when I am alone with my thoughts and realize that I don’t want to be alone with my thoughts anymore. The roof has sprung a leak and dudes are taking advantage of the slipperiness of rainwater on the tile floor – which is infinitely more slippery than spilled beer on concrete – to deliberately knock themselves to the ground. Between bands the bartender mops up an increasing quantity of water. This is one of the cleanest venues I have been to.

I see that two girls have walked in, unaccompanied. They also have cameras.

All of the bands are using the same equipment so it doesn’t take long for Creo En Mí [I believe in me] to get started. They have that elusive combination of ferocity and melody that makes your blood feel like it’s on fire. 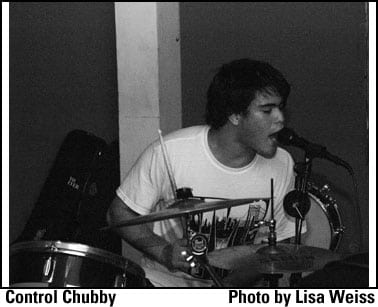 Control Chubby is next and they look young enough to be kids at the private school where I teach, only way cooler. Their music reminds me of when I was a teenager and my friends and I didn’t have shows to go to and we would play tapes on the boombox and make a circle pit in the driveway.

The last band to play is Venganza [Revenge]. Their sound has evolved beyond the generic youth crew stuff (you know, bands that put their logos on athletic shorts) that made them tedious to listen to the first time I saw them several months ago. Now, they sound like the CEO of British Petroleum being hit in the face with an oil-covered pelican. 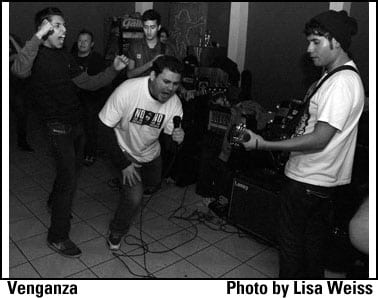 Outside, the streetlights have gone out and the rain is making rivers in the streets. I should be scared shitless, but I have this feeling that things are more right with the world than they were a few hours ago. The other attendees and I scamper, cockroach-like, to our cars. When I get home, the power is out. I have a feeling that it is not going to be a typical rainy-season hour or so until it comes back on. But the beer in the fridge is still cold. I win.

Forest of Fortune: By Jim Ruland, 288 pgs. By Matthew Hart