I’m pretty much always looking for an excuse to get out of town for a little while. The Used Kids offered up a spot in their van for a weekend, making me “Tour manager.” We went on some adventures, in the name of playing rock’n’roll in a few cities. Oh, and technically, the “tour” “started” in Brooklyn, but I went to a football game that night instead. SPORTS! Anyway, here’s what happened.

Day 1: Albany
The plans are to meet up in Brooklyn in the afternoon, but the time and places are changed fairly last minute. I arrive, thinking “Wow, they really want to leave early.” Instead, it turns out we’re helping Nate’s roommate move. As I turn and say to Mike, “It’s always a scheme with you guys, isn’t it?” So after a few hours, we finally hit the road, just barely missing rush hour as we head up to Albany. It takes us a little bit of time to get out of New York City, and then need to stop for some gross/hostile rest stop food, but we manage to get to the show without being late (and able to enjoy some of the nice scenery on the way while it’s still daylight out). Tonight’s show is in the basement of a house, and, apparently, Used Kids are the only band (the deal being that, apparently, there was another show at a bar, which was full, so this was the next best thing, and everyone could go over to the other show afterwards). We have to load in everything by pulling into someone else’s driveway across the street, which wouldn’t be a problem, except for that owner of said driveway pulls up about ten seconds after we open the trunk of the mini van. Yikes! On the plus side, I find out my two good friends are engaged. Hooray!

Even though there’s only one band, there is a really good turnout. Also since there’s one band, I figure this to be the best time to write about the Used Kids in particular; Someone recently mentioned to me that they take the best aspects of modern rock’n’roll bands, while leaving behind the “PBR Hipster” shit. There’s also a more and more obvious Tom Petty influence, which would probably sound pretentious if they weren’t enjoying themselves so much whenever they play. Speaking of which, the best point in the set was Nate coming over to me during a song with just Dan playing bass and singing, putting his arm around me, and saying “You know, I’m really bored right now. In fact, I don’t even know what I’m doing here. Oh, THAT’S it! NOW I remember!” and proceeds to duck walk back out as he starts a guitar solo. I’m pretty sure it’s the most “Nate” thing I’ve ever seen him do. The rest of the set has a bunch of college-aged kids (and one or two older people who literally stumbled in off the street) dancing along, and one fellow started screaming along to the Tom Petty cover.

After they finish, I get over on merch guy duty, and move a healthy amount of units (read as “T-shirts and 7”s”). I’m in charge of the books for the weekend, and am happy when I do the math to confirm that they didn’t lose money making the trip. (I feel weird getting excited over money, but it makes me happy when bands I enjoy are able to head a few hours out of town, and not become broke over it). When everything’s said and done, we end up just dropping our stuff off at our friend’s apartment, and almost as soon as we sat down to rest for a second, a party breaks out. Records are put on, air guitaring is performed, things are consumed, all the standards. The saddest moment to me is in talking to Mike, who informs me that The Ergs! are breaking up. We sit around and talk for a while. Life is weird.

Day 2: Portland
Apparently, we’re in the middle of some kind of tropical storm, or hurricane, or something today because it won’t stop raining. I suppose this is appropriate considering last night’s news, because rain is always a surefire signal of change. Before we leave, Mike has to send out an announcement about the break up, which is sad. I do a quick e-mail check to find out that I may have a job interview when I get back home (barring my scrambling to call up and reschedule). The biggest kick in the pants to me is going to the local deli where we apparently have a free food hook up, and discovering that all of our sandwiches are labeled by name, mine apparently being “Kid.” I know I look young, but come on!

We’ve got a healthy drive today, and it rains pretty constantly the entire way, to the point where it’s pouring by the time we get to Maine. Tonight is a basement show, with two other bands, the first of which we’ve missed because we were held up due to the inclement weather and incredibly poor rest stop service. After I help bring in equipment and records and shirts, I look around the house for a minute, and can’t help but notice the letter of complaint from the landlord, with a list of reminders such as proper garbage disposal, and my personal favorite “The oak panels of the basement floor are NOT to be used as firewood.”

We still manage to see the Jean Claude Jam Band, who I’ve never actually managed to see before, and apparently also may be breaking up. They’re definitely similar to Bent Outta Shape, only, dare I say, with a little more power pop to them. I dig it. Used Kids go and play a quick twenty minute set before the show has to finish up, going through the usual songs, and ending with a Tom Petty cover for the hell of it. Afterwards, half of us are starving, and the other half want to party, so we stop for beer, and the other half goes across the street to the chicken and wing place, which is apparently our only option. We find the party, we sit down to eat, and shortly after I’m scolded, on account that apparently, “No punk bands travel vegan anymore.” I guess that’s what I get for offering food to someone I don’t know. Despite watching some funny dance party action, I’m kind of happy we don’t stay there until almost sunrise, when we leave to stay with some friends in South Portland, where we ironically, end up staying until almost sunrise. 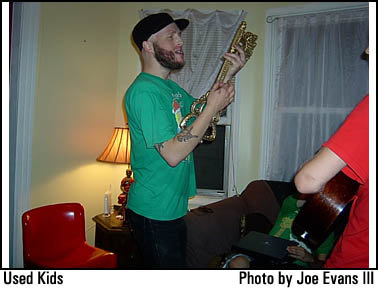 (Side note: The most “Nate” thing I hear all day, regarding punctuality; “I will not leave any city on time. I will always want to leave as late as possible. In fact I refuse to be anywhere on time!” [Double side note: Remember this part])

Day 3: Boston
The nice thing about today is that, apparently, the rain stopped, so we can actually enjoy Portland, which is a very scenic and beautiful place. I woke up out from under the desk where I slept, and ate some fried clams at a diner. We see a few sights, then eventually head to Boston, where the show is apparently at a combination pizza restaurant/bowling alley. First, we stop at a friend’s house to kill some time, where I unsuccessfully attempt to chase down an ice cream truck. There’s always next time, I suppose.

Upon finally getting to the “venue,” we’re quickly informed that we get to (mini) bowl for free, and get free pizza. “Unlimited?” we ask. “No, only three pizzas per band.” Yeah, that is pretty awesome. So first we have a “Boston vs. New York/New Jersey bowling match,” and then we get more free pizza than we could possibly even eat.

(Sign I’ve been hanging around with Nate all weekend: He comments on Kate’s bowling abilities, to which I reply “Yes. And while may be the New York/New Jersey team against Boston, Kate is definitely our ‘Ringer’”.)

Used Kids play first tonight. There’s a pretty big crowd for the fact that it’s pretty late, on a Sunday night. The big shame is that the stage has a huge curtain, which they open while setting up (instead of the clearly better option, of opening it just as the first song begins). Kate’s guitar goes way out of tune at some point, but otherwise it’s a nice, smooth set. I’ve got the merch set up nicely so that despite being in the back of the crowd that’s built up, I can see and hear everything just fine, which is nice, because I like The Used Kids. It’s also hard to feel bad when you’ve spent a night with free bowling, pizza, and good songs. It’s a nice night.

The ‘Jam Band plays next, and they’re just as good tonight, if not a little better. I believe the “I’m not sure what we’re doing as a band” issue comes from at least one of the dudes moving, who I could swear I overhear saying something like, “I’ve done the long distance band thing before.” Hopefully things work out for ‘em, because they’re pretty rad. The night finishes up with a local indie rock band, whose name I don’t really catch. They’re okay, but nothing that overly grips me, really. Kate and I sit around laughing at some of the hipsters doing that dance that they do (You know the one – where they’re trying to dance, but without actually moving? Like just one half of their body? You know you’ve seen it at some point), one of whom manages to drop their drink, causing us to laugh.

After everything finishes up, we slowly pack up and drive back to our friend’s house. Mike has a band practice the next day, so we need to leave early, and he goes to sleep almost immediately. I follow shortly afterwards, because no matter how badass I am, I can only take so much lack of sleep and food, and need to pass out.

Day 4: Home
You wouldn’t think there’d be much excitement on a relatively short ride home, would you? Well that’s where you’re wrong. Remember when I said, “Mike has band practice the next day”? Remember when Nate said, “I refuse to be anywhere on time”? Needless to say, it’s a struggle to get out the door on time. We’re waiting in the van, as Nate walks out, with a roman candle. “I was given a firework – which are illegal in our New York state.”

“Nate, let’s go!” we yell from the van, as he begins setting it up in the house’s chain link fence.

“Nate, that isn’t even pointed the right way!” we keep yelling, as he lights the fuse, seemingly aimed straight towards the ground.

“Oh shit…” we say to ourselves as the tube catches on fire, and proceeds to shoot out a bunch of fireballs at the house.

“Okay, that was pretty fucking funny.” We laugh for a moment. “Now get the fuck in the van!”

We cut it kind of close, but we get Mike home on time.