I don’t go to every show that comes through town. You don’t either. No one does. Well, maybe you do if you live in a town where there is never more than one show on any given night. Even then, you probably don’t feel inclined to see every band that rolls through your city. If you’ve ever played in a band or gone on a tour, you understand that. Not all music is for everyone and believe it or not, some people have other things to do besides go to shows. I get it. I’ve understood this since high school. I graduated in 1999, so I’m not as old as some of those who grace this website with their contributions but I’m getting there. So when I go to certain shows and I don’t see particular individuals, or for that matter a lot of people in general, I don’t sweat it. People get married and have kids (not me), get jobs where they have to be up early (which doesn’t stop me really), and have other events in their lives which prevent them from going to as many shows as they used to. That’s fine—no one is asking you to be some kind of dork/loser who does nothing but watch TV, drink beer, and go to shows. That is what I choose to do with my life, but apparently I’m a dying breed (in Saint Louis anyway). I take off work to go to shows. Plenty of times I have also taken off work the day after a show, so I can really enjoy myself. But there are the people who’ve stopped going to shows as much or, even worse, altogether. I understand losing interest, I guess. Well, not really—I mean, who are you people? What happened to you? Did you grow up? That’s cool, posers. Don’t be confused or sad when your band plays to ten people at the next show. 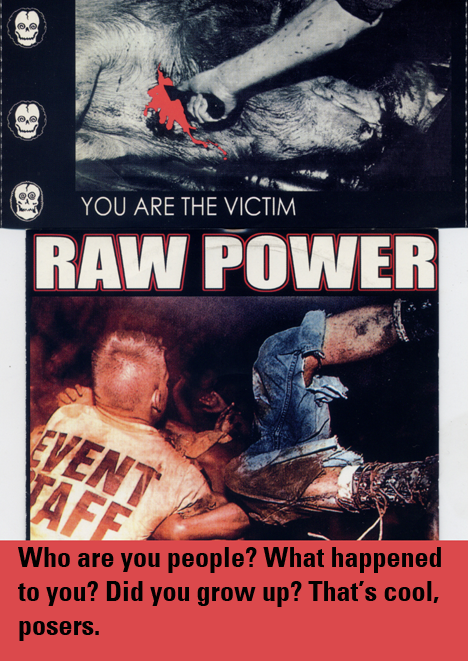 I’ve understood for quite some time that people have other things to do besides go to shows. But when Raw Power is in town, you clear your schedule! I admit I didn’t know much about them besides that they are an Italian hardcore band that has been around a long time. Back in June I went to see them by myself. Two days earlier I went to see Sloppy Seconds by myself. The following weekend I went to see The Meatmen by myself. I’m used to it. I saw people I knew at all of those shows, but not the people I normally hang out with. (Lame, I know.) I had to work at 7:00 a.m. the next morning, but whatever—Raw Power! Italy!It was pretty empty inside the club so I figured I was there early and people would show up shortly. That didn’t happen. By the time Raw Power went on there were maybe thirty people watching them (including the opening bands). That is a rough but probably fairly accurate estimate. Sure, it was Sunday. Sure, a few other great shows were happening the same week that people might have chosen to attend instead. But come on! When a band from Italy that was formed in 1981 comes to town, you fucking go! They played a great set, I bought a CD, and went home very glad that I had made it to the show. I felt bad for the band but didn’t think much of it. Unfortunately, small crowds are commonplace.

The next day at work I was dicking around on Facebook. (I was on a break, alright?) I saw a post from the owner of the venue: “Thanks to all the hardcore fans in Stl, Raw Power will more than likely never come back.” According to the event page, eighty-two people went to that show. Why would you claim you are going and then not go? If I’m not sure, I select “Maybe.” If I know I can’t go, I select “Can’t Go.” I’ve actually gone back and changed my selection from “Going” if my plans change. But I’m a dork and Facebook is dumb. Either way I really felt bad at this point. The owner dude makes a lot of dumb posts (don’t we all), but this one seemed real. I never asked him but I assume the band complained about the turnout and told him they would skip our fair city next time. Who knows, though—I only knew a couple people at that show. Of all the people I know, especially hardcore fans, practically none of them were there.

You shouldn’t take these bands for granted; they could break up, someone could die, they could decide to never come to your town again. How would you feel if you never had another chance to see Raw Power? Well, I guess quite a few people in my city don’t give a shit. That’s sad. I’m not even that into hardcore (not like you “big hardcore fans”) but I know you need to go out and see the bands that helped “pave the way.” I don’t even know what else people would’ve been doing that night anyway. I mean, the Cardinals were playing the Dodgers (in L.A.), but the game was on at the bar. Geeze!

I never wanted to write a column like this but it needed to be done. It sucks that no one went to see a great band from another continent but I guess it gave me material for this column. Until now I hadn’t written anything in about a year, maybe I’ve been too busy going to shows. (Get it?) But for reals, it is important to remember that a big part of this “scene” we are a part of is the music. It is not the only part, but without it we don’t have much more than a bunch of people who don’t want to grow up, complaining about how there is nothing to do. Don’t let it get to that point. You don’t have to start a band or record music—just go see bands play. You’ll be glad you did. Trust me.

STAND AGAINST: Until the End: CD