December 30th was a sad date for Annie’s Social Club in San Francisco, as it was the night of their last live show, and the night before they closed down completely. After putting on tons of fun shows for the past couple of years, they had to call it quits. A real bummer, as it was a nice place to see shows- good size, friendly staff, reasonably priced, etc. I will miss their presence and wish that they wouldn’t have had to close up shop due to what I believe were financial difficulties in these times.

The line up for their last live show was Unko Atama, Jesse Morris and the Man Cougars, the White Barons, and Everything Must Go. I’ll only write about Unko Atama here, as I was kind of in and out for the other bands.

First I should say that Annie’s did decorate for this last show, by putting up flyers from many shows past, as well as posters from Annie herself thanking everyone for their patronage. It was cool to look at all the flyers- particularly because a lot of them were done by this one artist that I think makes really nice ones- and reminisce about all the bands that have played there over the years. 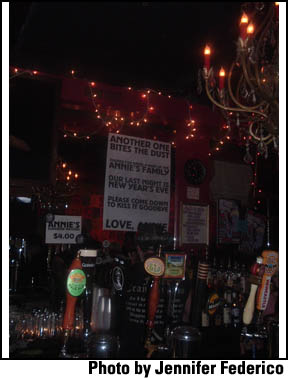 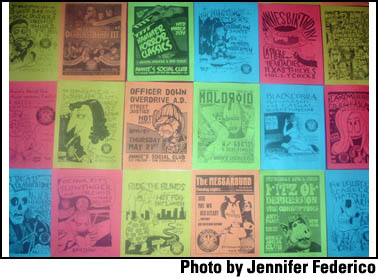 I’d wanted to go to the show not only because it was Annie’s last one, but also because Unko Atama (http://www.myspace.com/unkoatama) were playing. I only recently discovered this band, but I totally love them! 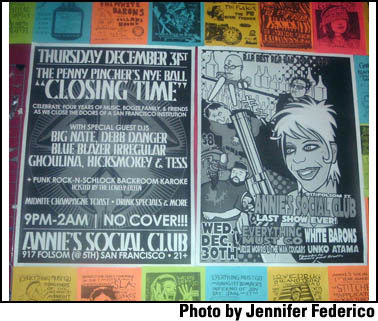 I think anyone into the Ramones would love them to, as there is a really strong, undeniable Ramones influence on their music (and I know that at least some of the band is also in a Ramones cover band, the Remones).

Unko Atama (which means “Shithead” in Japanese) is a 3-piece from the Bay Area, and they are super tight. Really! The bassist, who sings the majority of the songs, has I think a nice, natural voice. It sometimes reminds me of Glenn Danzig, although maybe without all the drama I associate with Mr. Danzig these days. The guitarist, who also sings, reminds me of Billie Joe (Green Day) sometimes and George Reagan III (Hagfish) often (only with an added Japanese accent thrown in there). He plays awesome, fast rhythms in a style that does my heart good, with only a few leads here and there, and not in a metal style (thank goodness), so they fit right in. The drummer is ultra solid and throws in lovely little rolls and other treats without being super flashy. I especially love their heavier stuff, although when the bassist and guitarist harmonize, it gets more poppy in a totally sweet and good way. I just think they are a really fun band, and imagine that I will go see them often. They seemed to have released an EP in 2008 and I would like to get my hands on it!

And as cheesy as it may be, it really made me so happy to see all the people coming out for Annie’s last show. People seemed to be in good moods, despite the fact that it was a sad occasion. I honestly felt filled with love about the whole thing. And the bands all gave her props; some of them pulled Annie onstage and she sang a chorus with them, etc. After the bassist from Unko Atama said a few words about her, though, he said, “Enough of this talkin’ shit, let’s play some rock n’ roll!” And rock they did.