All text and photos by J.C.

The punk scene in Fresno is alive. Barely. Kids interested in true hardcore have been reduced to a club called Bam Bam’s.

Bam Bam’s spends six nights a week as a gay bar. As George Castanza would say, “Not that there is anything wrong with that.” On the seventh night there is punk. This is not your show-tune style punk. As far as I could tell, it is not a gay-punk scene, just punk, fast and hard, three chord stomps, mosh pits and blood. Well, maybe not mosh pits.

Because Bam Bam’s is a gay bar six nights a week, the Fresno police have taken notice. The police have pushed to have the bar closed down, citing lack of dance permits. Where is Kevin Bacon when you need him? Because of this, the punk shows have taken a tamer quality. No pit.

It seems that if the Fresno police were to walk into the club and see a bunch of kids slamming into each other, they might think there was dancing involved. Now, I am no expert on dancing, but it seems to me that dancing involves a couple – possibly romantically attracted – moving together slowly or fast, and it might have a hint of sexual tension. A mosh pit, on the other hand, involves elbows, fists, and possibly broken body parts. It’s a tremendous difference.

On Saturday night’s show, any time a pit started, the perpetrators were thrown out of the club with no refund. Imagine a show with everyone standing around, nodding his or her head to blistering music. Not a pretty picture.

I caught one song by the Getaways. They sounded good.

While the Victim’s set up I headed to the bar for a beer, I quickly found out that not only is there no dancing or moshing, there is no beer. Strike two. Lets head down the road for a tall boy from the local mini-mart. 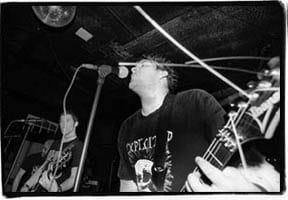 The Victims took the stage as I finished my beer in the parking lot, I quickly ran inside for the thirty minute or so set. The four-man band played their heart out to a mostly subdued Fresno crowd. Hell, you had to be mellow or be thrown out.

All Dead was a no-show, so next on the bill was Civil Duty. Like the Getaways and The Victims, Civil Duty is a group of Fresno locals. Civil Duty gave the crowd a preview of their soon-to-be released CD. The punk was, well, how punk should be played: hard, fast, obnoxious, in your face, and numerous other clichés that could be used to describe music that makes your blood boil and your toes do a bit more than just tap. Good stuff.

The main event of the night was Union 13, a southern California band making a rare appearance in the God forsaken Central Valley. Little did I know, as well as the kids at the show, that Union 13 would be M.I.A. According to the promoter of the show, transportation problems were the only excuse offered up for letting the kids of Fresno down. This turned out to be my lucky break, though.

As I walked out of the show, I noticed a tow truck backing up to my ride. Seems that I had chosen to ignore the signs that politely stated, “No Parking, Tow Away.” I quickly jumped into my truck and backed right into the tow truck. I wasn’t going to get towed with out a fight. The driver of the truck quickly walked up to me and asked me to stop bashing into his truck while he pulled out of my way. He then pulled up to an older, blue, VW bug and began his work. Why is it that VW’s always get towed?

So, the next time you’re getting your jaw smashed at a show, or having a cold one while enjoying some good old punk, think about the poor kids in Fresno that should have it so much better.

J.C. is a first time contributor to razorcake.com. We know very little about him.

COLOUR ME WEDNESDAY: Anyone and Everyone: 7″