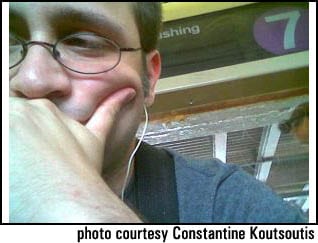 Let’s face it, change is awkward. More often than not, all we really want is to wrap ourselves up like finger foods in vegan bacon strips, basking in familiarity’s comfort and reality. Go on, nibble on the edges of your vegan bacon security blanket if you want. Lord knows I do too sometimes.

I know that there are other people out there who have outgrown their security blankets, both real and metaphorical, long ago. However, it’s a process that we need to all try and start on our own time. Contrary to what my family thinks, you can’t just throw a kid into the deep end of the pool and assume he’s gonna figure out how to float in the short time he has before drowning. Thanks, dad. You’re lucky my big head doubled as a flotation device.

So as I near the end of my graduate school career, which has plagued me with stress and bouts of acute insecurity as I truly begin to consider life as a punk rock kid from Queens in the big, wide, and boring world of conventional academia, I’ve slowly begun working on my master’s thesis. Emphasis on the “slowly” part, because well, parties and beer and awesome punk rock shows have gotten in the way. Also laziness; don’t forget that, too. The whole process has, in general, been long and boring and a bit frustrating because of a variety of reasons, but it’s okay. That’s because I’ll soon begin working on research and preliminary writing for my master’s thesis. And guess what? It’s on something that I actually enjoy. The focus is on revolutionary science fiction writer William Gibson, and his “Sprawl” trilogy, that began with the very, very cool cyberpunk novel Neuromancer. He’s the guy who wrote the short story that that Johnny Mnemonic movie is based on. I’m hoping to validate ideas on Gibson’s theories on the state of consciousness in the near and not-so-near future, which, among other things, branches off into issues on gender identity, cyber-communication, human existence in relation to futuristic ideas on the “human body,” and a plethora of other ideas that just tickle me neon-pink.

What’s the point here? Well, according to my advisor, this is pretty much the first time someone’s covering this sort of thing. Scholarly work on William Gibson is sparse compared to the plethora of material available on anyone who farted on paper between 1800 and 1950 in the U.S. and Europe. Which is a lot, trust me. I’ve read most of it since I started college, and while more and more do we see a growth in interests besides the traditional canon in terms of projects and areas of study, most of the time that’s rare. Not so rare though, because even then, in the end, there you’re still, at least in my eyes, looking at works from traditional standpoints and traditional source materials. And though it is not the fault of the reader, when presented with tools, you use them. You get lemons, you make lemonade.

But what if you want Jones Soda instead of lemonade? And not just lemonade-flavored Jones Soda, but the red kind? Especially after having gotten a taste of that sugary deliciousness that is Jones at a party with your friends, opening your eyes to a magical world of beverages beyond what you’ve initially been exposed to all through life? You can’t really make Jones Soda with just a bowl of lemons. Unless you can do magic or something like that. The point is that you work with the tools you have. But to achieve something beyond lemonade, you try to work around the fact that normally you’d only be presented with lemons for lemonade. Scrounge for a soda-making machine* in the junkyard behind the neighbor’s house, and while you’re at it, go get some red food coloring.

A lot of work, right? It’d sure be easier to just stick with making lemonade in the kitchen in, like, a half hour or whatever.

If anything, the proliferation of bands that sound like Screeching Weasel should be an indication of this pattern of behavior. Not that there’s something wrong with Screeching Weasel (au contraire, I hold them in nothing but the highest regard), but if that’s your source material, then the field of work that can be done based on it is fairly limited. Take a look at punk rock and pop punk in the 1990s. You know what I mean. And you know what; sometimes there really isn’t anything wrong with listening to Screeching Weasel. Sometimes bands that really don’t want to do much beyond a simple and catchy song are exactly what I need. But that’s not the point. The point is that more and more often, what we tend to see around us is the same trend, a limitation of a field of data to work with. After a while when a “standard” has been set, you can’t help but use the standard to develop guidelines in the establishment of anything else that is based on the original.

There were about four hundred movies released a year in theaters in the U.S. in 2006. When was the last time you truly saw more than a handful of really good, really original movies out in a single year? When was the last time that the same old formula wasn’t followed? Rugged action heroes and female sidekicks/love interests working against some sort of inevitable evil, etc., etc… or perhaps a movie version of what’s by now a TV-cliché of fat funnyman paired off with a conventionally attractive romantic female foil? ‘Cause we’ve never seen that before. **

Now, this isn’t new by any means. What is new, however, is trying to factor in exactly what sort of effect this is having on arts, even underground independent arts that have traditionally thrived on being set apart and, in a way, a cut above traditional media forms. Am I recommending some sort of violent reform in the name of art? Not really. Like I said, I like Screeching Weasel. I also enjoy occasional forays into traditional literary forms that aren’t exactly that mind-blowing—more like a few cuts above “absolutely ridiculous.” But there needs to be a balance. Something to both sharpen the dullness of the easy-to-access media fields we’d normally work with every day and to act as a reminder that there’s more to music or literature or movies than just what you think is everything, what you initially think you’ve got to work with. After all, the spark of utter individuality is always there and even though the cynics will say that there’s nothing new anymore and the literary nerds will tell you that there are only two real stories in existence: the stranger coming to town and someone going on a trip (which, in essence, are actually one story from two perspectives, but whatever).

I guess that, in the end, I’m just concerned. Concerned that what I always saw as the really original bands and thinkers and artists that I grew up with are going to eventually be supplanted as inspiration for further generations (not an archetype to follow step-by-step as a design) and replaced with six million clones of My Bleeding Heart Lays Dying In Vain or whatever their name is that’s big these days and inspiring bands to more or less sound exactly like them. You know—that band that sounds like all the worst parts of Cradle Of Filth and some teenage girl’s diary combined—the ones who narrowed the playing field and ruined it for everyone else.

*) AUTHOR’S NOTE; I have no idea how they actually make soda in factories, so I just made “soda-making machine” up. Sorry.