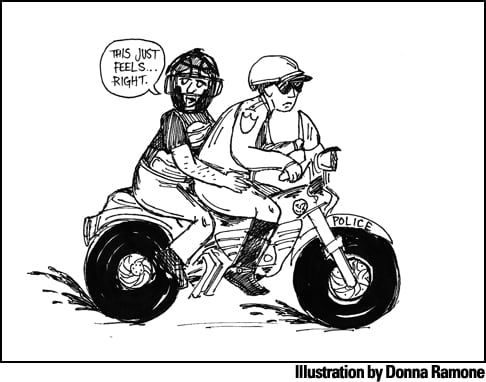 So it’s summer, or as I call it, The Hot Season. And you know what that means: baseball. That’s right Ben Snakepit—baseball. Since it’s baseball time, I am writing another sports-related column just for you Ben. It’s been a couple of months since I scribbled some notes down for this one, so forgive me if parts of this are hard to understand. I’m lazy. So what? Said notes were jotted down on an old paycheck stub from Arbitron (a ratings and media research company). I counted, because I was in the ratings! Or so they told me. This particular stub shows that I made a whopping fifteen dollars off them. Yay. Back to the column.

I had just woken up—it was around noon. Apparently, I was still tired, because I fell back asleep. And when I did that, I had a dream, just like Martin Luther King, Jr. Well, not really. This one wasn’t so important. In my dream, I was playing kickball. My buddy Mr. Rin Tin Tin was involved in a play at third base. I couldn’t see if the throw beat him, but I’m going to assume he was safe. He’s swift on the base paths. The umpires in the game were Saint Louis County cops. County Brownies as we call them, because they wear brown uniforms. (Original, I know.)

In Saint Louis, city cops don’t give two shits about much small shit. They’re more concerned with rapes and murders, and justifiably so. Per capita, Saint Louis is the most dangerous city in America. Yay again. I wrote a rap song about the cops here called, “No Crack, No Murder, No Problem.” Basically, if you’re not involved with crack or murder, there’s not going to be a problem. The Brownies, on the other hand, will give you a speeding ticket for going five miles per hour over the limit. Seriously. There’s not as much crime going on out there, which results in them being assholes over every minor infraction.

So, when I realized county cops were the umpires, I knew it would be a fun game. I don’t remember much more of the kickball game, but I’m sure the “umpires” were assholes, and I’m sure we lost, because our team sucks. We’ve lost our spunk as of late. And by “as of late,” I mean as of the last five years or so. We used to be a force, but that was years ago. All of this made me think of a good idea for a column. Umpires are like cops in many ways.

Umpires enforce the rules in baseball and football. In hockey and basketball, umpires are called referees—different name, but same job. They keep the players in line. Cops are in charge in life. When you fuck up, they notice and you get in trouble. It’s the same concept. In a baseball game, if a pitcher does something wrong with his delivery, the umpire calls a balk. The batter goes to first base and any and all base runners advance to the next base. In life, if a driver proceeds through a red light because there’s no cross traffic, a cop will pull the driver over and issue a ticket. Both parties are almost always out to get you. You’ve got to be on your toes at all times. Umpires and cops both wear uniforms. They’re easy to spot. Sports teams wear uniforms too, but they’re usually better looking than the ones the umpires are wearing. In football they look like zebras. And that’s what I call them. You can argue with an umpire or a cop, but you will never win. Never. It’s a fact. In a game, you will get thrown out and possibly suspended. In life, you will get arrested, and possibly do time. It’s a two-way street, but there’s really only enough room for one vehicle. And that one vehicle is the umpire or the cop. It sucks, but that’s how it is.

Both umpires and cops are important and serve their respective purposes, but they also both suck. They’re wrong a lot of the time and interfere with shit, making games and lives not move as smooth as one would like. While I’m not a fan of either, they are helpful sometimes: like when an umpire blows a call at home plate to benefit the Cardinals, or when a cop pulls over the driver ahead of me when I’m drunk. Sports and life wouldn’t work without them.

You can’t call your own balls and strikes. You also can’t break the law whenever you please. An absence of rules or laws is called anarchy. Anarchy burger, hold the government please. The Vandals. When in Rome; just kidding. Anyway, up the punx. Anarchy can’t work. Just deal with the umpires and the cops. They’re not going anywhere. Well, after the game, the umpires have their own locker room. And cops have the donut shop. I hope you enjoyed my perspective on all of this, Ben and everyone else.